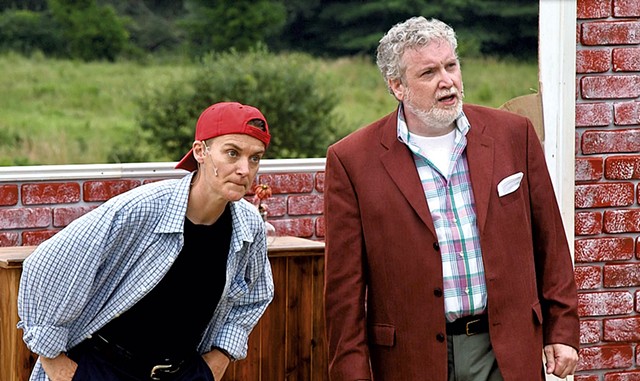 To welcome audiences back to live theater, Vermont Stage has picked a comedy that scrambles a bunch of hyperbolic characters together with no chance of overcoming an immense obstacle. Better yet, only two actors play all these denizens of a small town, changing roles at lightning speed. Staged outdoors at the Isham Family Farm in Williston, Popcorn Falls is humor with a big dollop of hope.

The tiny town of Popcorn Falls is barely big enough to support a bar and grill. It has a grade school, a library and a lumberyard, but all of these are under threat now that a developer has rerouted the river that had provided the town's lone tourist attraction, the titular falls. Bankruptcy looms, and the citizens are grumbling at the new mayor, Ted Trundle. Once the town is definitively broke, cold-hearted Mr. Doyle aims to convert the downtown to a sewage plant.

Hats fly on and off, a shirt becomes an apron, a sweater becomes a cat, and every voice is distinctive. tweet this

The plot cannot withstand scrutiny, but the premise offers something fun to root for: If the town can put on a play, it will secure a theater grant and use the money to save Popcorn Falls. A happy ending must be hiding in there somewhere, but the town only has a week to produce the show.

At first, putting on a play seems simple enough to Mayor Trundle. He's prepared to write it himself, yet theater references sail over his head — and provide some of the show's funniest moments. His story stalls at combining a pirate, a kitten and a romance, but he does grasp the need for a villain, even as Mr. Doyle keeps slithering in making threats.

The citizens most eager to get onstage are several notches below experienced. "Is acting when you cry?" the selfie-snapping, gum-chewing Margie asks at tryouts, before she goes right back to scrolling on her phone.

That swiftly sketched character is one of about 20 that actors Sarah Mell and Patrick Clow play over 90 minutes. Hats fly on and off, a shirt becomes an apron, a sweater becomes a cat and every voice is distinctive. The transitions and the results are equally entertaining, and each character is easily recognizable as the actors pinball through scenes featuring bunches of them.

But they accomplish more than speedily swapping hats or throwing on an accent. Both performers give each character clarity, making their traits vivid. And it's not just exterior indicators; something's going on inside, too.

Comedy is exaggeration, and the style that director Cristina Alicea establishes lets the performers have fun with overstatement even as they make their characters real enough to care about.

Mell (who uses gender-neutral pronouns) has the bigger repertoire of characters and brings clever comic movement and great vocal range to them all. They use bottomless vocal fry for a millennial and an aristocratic register to portray elitist Ms. Parker, librarian and staunch cat owner.

In his principal role as the mayor, Patrick Clow moves the story ever forward through unending obstacles, like an out-of-shape skier who's mistakenly strayed onto a moguls course but is determined to finish.

Trundle has had his share of failures in love and work, but he's not ready to let this bedraggled town become another one. When his hope flickers, Clow's sad-sack face can make even disappointment look hilarious. His other roles are brief and silly and include making sound effects that would crack up any fourth-grader; they seem to work on the grown-up audience, too. 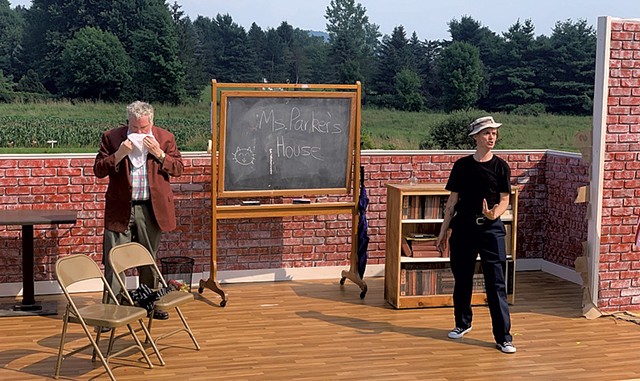 The charm of this show is two actors working together. At Friday's performance, the pair had polished their characters well but were a little ragged in a few set changes. It's fun to see a little failure and the finesse to recover from it, because these actors didn't lose a beat, even when gusty wind whisked some props to the floor.

The script calls for some hat and prop handoffs to take place in the open, with a "nothing up my sleeve" jauntiness.

Playwright James Hindman's farce offers dizzy changes and entertaining characters, though the script isn't especially witty. Many one-liners are too flat to elicit a groan, let alone a laugh. The comedy comes from the impossible situation and, more so, from the impossible feat of two actors handling so many characters.

Hindman himself is an actor, and his play is a celebration of how performers can turn a wig into a personality.

Popcorn Falls is a brisk, bouncy ride and needs a sturdy set to keep the antics moving, and scenic designer Chuck Padula delivers. He lets the audience drink in the farm location with a field visible beyond the set's low back wall. On the sides, two walls mask entrances and allow for fast character changes. The walls are the faux-est of faux brick, consistent with the dying town's limited resources but drearily monotonous. The set's virtue is its flexibility and openness to the elements.

Costume designer Cora Fauser puts Mell in a black T-shirt and pants and then supplies an overshirt or other missing piece to finish a character. By varying posture, attitude and voice, Mell can switch gender and personality with just a hat or glasses. Clow can make a man out of a monocle.

Pace, speed and surprise make the show fun. The gaping plot holes include an unresolved offstage disaster that might crimp the happy ending, but only a brute would imagine anything but a joyful outcome. The characters, who wear their flaws and failures like plumage, deserve no less.

The original print version of this article was headlined "Jiffy Pop"