Theater Review: 'Peter and the Starcatcher,' UVM Department of Theatre 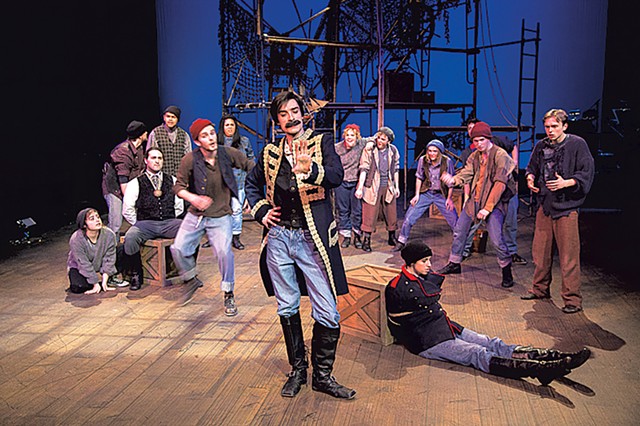 Perhaps the more important question about Peter Pan isn't how he can fly but why he doesn't want to grow up. Peter and the Starcatcher proposes an answer. The irreverent prequel to J.M. Barrie's beloved story sends a 13-year-old orphan on an adventure that requires a child's courage to survive. The play gives a large cast of University of Vermont Theatre Department students a chance to show how theater mixes real and pretend to stretch an audience's imagination.

Playwright Rick Elice based the story on a book by Dave Barry and Ridley Pearson, but the play is essentially about theatrical storytelling itself. Using a host of staging stunts, an ensemble of 15 actors plays about 50 roles, most flying by too quickly for a costume change. By calling attention to theater's artifice, the show makes viewers commit all the more to suspending disbelief. Because, if Peter Pan is going to fly — or exist at all — it will be because the audience can imagine him doing so.

Set in 1885, when the British Empire was near its colonial peak, the play begins at the Portsmouth docks. A boy so ill-used that he's never been given a name has been sold into slavery with his two orphan friends, Prentiss and Ted. The three already have had a miserable upbringing before they're hustled into the hold of a small, dilapidated ship named the Neverland.

Booking regular passage are Molly, daughter of Lord Aster, and her nanny, Mrs. Bumbrake. Lord Aster will board the Wasp, a faster vessel, to complete a dangerous mission for the queen by safeguarding a trunk of precious (and secretly magical) cargo.

Both ships are bound for the distant land of Rundoon, but before they cast off, the despicable captain of the Neverland switches an identical trunk for the queen's treasure and leaves the ringer for the Wasp. It's not long before pirates commandeer the Wasp to nab the wrong trunk, victims of the switcheroo. Trouble, nautical ineptitude, puns, malapropisms and a huge storm at sea ensue.

Actors take turns narrating the twists and turns of the plot, but the details never matter. The point is getting Molly, the Boy, Prentiss and Ted to form an alliance, while the pirate captain, Black Stache, parades his villainy with melodramatic excess, supported by his sidekick, Smee. Once everyone is shipwrecked, the children face tests of courage and meet island natives and some creatures ready to germinate into characters seen in Peter Pan.

The script is overstuffed with groaner puns and schoolboy humor, flatulence included. Much wit is aimed at theater itself. The overlarge, stylized teeth of a crocodile are an excuse for chewing on the scenery, and joking about it. Most laughs arise from that renewable theatrical resource, the impulse to ham it up.

Director Sarah Carleton emphasizes a sense of play as performers make rapid-fire role changes. Actors even become walls, demarcating bulkheads when young Molly explores the ship's passageways, or jungle trees that move and menace to show what it feels like to be lost. The audience is constantly nudged to engage its imagination when Carleton uses a decorated glove for a bird, or rippling ropes for waves.

The cast radiates infectious joy while leaping, lunging and rattling off gags based on silly anachronisms. tweet this

Clever as the staging is, the show could actually use more inventiveness and dazzle. Some of Carleton's ideas feel like solutions instead of surprises and, as eager as the actors are to execute them, they'd need the drill-perfect precision of a marching band to achieve the magic the script implies. Still, the cast radiates infectious joy while leaping, lunging and rattling off gags based on silly anachronisms.

In many exchanges, the comedy is so broad that the audience can take a gag on faith despite dialogue sometimes lost to poor miking or subpar diction. Carleton's staging lets the actors make the most of mugging opportunities, but the performers also get chances to show restraint.

As the Boy, Caleb Chew is riveting as his character evolves from a wretched, downcast lad to an adventurer filled with wonder at the world. Chew's wide-eyed face and physical grace convey a heartfelt search for the central joy of childhood: hope.

Sam McCollum is a powerful presence as Molly. She tackles obstacles with curiosity and confidence. And, when the Boy is inclined to despair, she nudges him onward with buoyant daring.

Christian DeKett brings impeccable timing to Black Stache, a role made for hamming it up. The character is such a cartoon villain that his mustache is garish greasepaint, and DeKett knows how to enchant an audience with over-the-top bluster.

Kristen Brown, as Prentiss, and Juls Sundberg, as Ted, bounce like pinballs through danger, always finding support from each other. Ethan Foley makes Smee both inexhaustible and incompetent, a hilarious combination that leads to trouble.

With music by Wayne Barker, the script contains the bare minimum of songs to qualify as a musical. Musical director Nate Venet plays synthesizer and sound effects from an upstage platform.

Scenic designer Jeff Modereger supplies props and decoration that serve as springboards for the imagination. The ship, built from a jumble of scaffolding draped with sticks and netting, is vividly sketched, but a jungle and a grotto are only cursorily drawn.

The show's emphatic theatricality stirs the audience's imagination and teases viewers to catch all the correspondences to Peter Pan. Wondering how they'll get a ticking clock in a crocodile's belly or a hook on a pirate captain's hand becomes a game.

By the second act, the story has managed to lay out a past and a future for Peter, and even the basis for him to fly. When a top hat appears on an Italian chef, viewers may wonder how it will get from that man's head to young John Darling's in a nursery in London. Imagining that kind of journey is the pleasure of the play.

The original print version of this article was headlined "Magical Thinking"