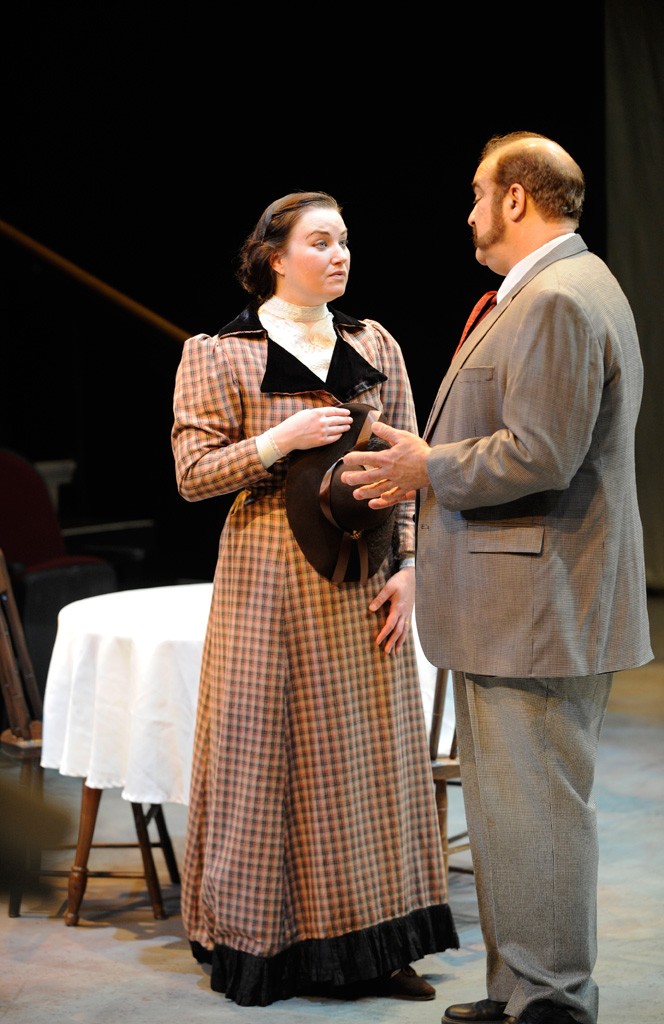 In his preface to Our Town, Thornton Wilder recounted his dissatisfaction with the theater of his time. "It aimed to be soothing," he lamented, and proceeded to attack that problem with innovative staging and a deceptively simple story that successfully explores what it means to be mortal. Our Town is an indisputable classic of American theater, and it works both as an intellectual premise and an audience experience.

The trouble is, the play has become soothing. The passage of time did it, because Wilder set it with a 37-year backward glance that's now a 113-year squint. He wrote the play in 1938, and placed its three acts in 1901, 1904 and 1913 in the mythical, supremely ordinary town of Grover's Corners, N.H. The time shift is intended to give the audience a perspective on the characters, forcing us to look at them (and, in a way, back at ourselves) with the benefit of knowing more about the boundaries of their world than they can see. When the narrator tells us the young paperboy will die in World War I, we acquire a vantage point we can never have on our own lives, or on a conventional, realistic play. We treat Our Town's characters with compassion, because we're wiser.

Unfortunately, the play's quaint expressions and antiquated manners now make it sound wistful, as if it's idealizing a lost time. The equivalent perspective today would be looking back at 1977, a time we don't venerate but rather forgive for its follies. Wilder wasn't romanticizing the start of the 20th century; he was giving the audience the benefit of time, of history, and he meant viewers to apply that perspective to themselves. The playwright called attention to how the passage of time both elevates and diminishes the characters' dreams and passions. It was a device not to soothe theatergoers but to wake them.

Wilder's other great conceit is showing characters engaged in quotidian acts in a town so normal that "nobody remarkable ever come out of it, s'far as we know." Both devices have been damaged by the passage of time, but not destroyed.

Wilder's new theatrical ideas include tearing away naturalistic performances, with their false claims of the real, and substituting stylization and pantomime, which own up to the artifice of theater. And Our Town is self-referential. The Stage Manager narrates and steers the action, sometimes breaking into scenes to tell the actors to leave the stage, sometimes taking a small role himself. Embodying both distance and compassion, the Stage Manager is our conduit for responding to the play. He has a firm affection for the people of Grover's Corners — the "our" in the play's title encompasses him, too — but he shuttles them before us unemotionally.

Grover's Corners is small, but the play's focus grows narrower still as we concentrate on two households, those of Dr. and Mrs. Gibbs and Mr. and Mrs. Webb. These next-door neighbors are connected even more tightly when their children, George and Emily, fall in love and marry.

Life is that simple in this play — the biggest adventure is falling in love with the person next door. Then life settles back down to work, raising children and sharing a community's events. Billions of people — past, present and future — struggle with and exult in the very same milestones, yet each has a unique experience. Wilder shows us how to look at ourselves and maintain two opposing truths: that we're as distinct as fingerprints and as numerous as grains of sand.

The play's final vantage point is from the town graveyard. Wilder gives the audience a way to step outside of time, to grasp mortality and, finally, to cherish the fleeting and fragile nature of life.

Lost Nation's production, directed by Kim Bent, is a conscientious presentation of a great play. Bent is careful to avoid the excessive sweetness that would make this classic merely soothing — he doesn't treat it like a treasure on a shelf. But he's also not inclined to investigate what will make it work for a contemporary audience, and how to make it as fresh, novel and challenging as it was in Wilder's day.

The tone is calm and assured, and though the humor sparkles brightly, the performances are more competent than dazzling. That's the difficulty with this play — it's not supposed to be dramatic. But the acting must compel the audience to feel invested in these intentionally simple characters. In this production, George and Emily's courtship is misted over with cute mannerisms. There's little chemistry between them, and their love's inevitability feels more bone-dry than exultant. In other scenes, like Emily's last visit, the simple directness of the story gives the performances strength.

The play's ideas are well presented, but a more imaginative staging could make them more moving and powerful. Bent smoothly positions the cast of 19 in both intimate scenes and large gatherings, and anchors everything with a live pianist on stage. With a languid pace, the show leans more on the text than on the performances to reach the audience. The quality of the acting varies, but the core roles are handled thoughtfully.

Taryn Noelle and Mark Roberts play Mr. and Mrs. Gibbs as solid, reassuring parents. Ryan Halsaver appears a little too old to take on young George — his smile is the most boyish thing about him — but he brings happy energy to the role.

Jeffrey Maclay plays milkman Howie Newsome with sweet conviction, and Scott Renzoni brings out both the humor and the darkness of frustrated choir director Simon Stimson.

Bent takes on the role of the Stage Manager and neatly hits the character's entertaining notes. This is one of the trickiest roles in theater, and if his performance contains no fireworks, it also avoids the maudlin.

The production is fastidious about the period, with the result that costume detail takes the place of the scenic elements Wilder demanded be omitted. Costumes by Cora Fauser are generally quite good, and the period facial hair is inspired.

Donna Stafford's massive, stylized art on the background scrim seems to overbalance the actors while adding no imaginative statement of its own.

In a nice touch, Renzoni works the sound effects onstage alongside music director Daniel Bruce on the piano. Wendy Stephens' lighting provides some splendid dawns and keeps changing to evoke the play's range of moods.

Wilder was writing about mortality, not sentimentality, and this production is generally able to avoid the cloying. If anything is missing, it's an approach bold enough to let this 76-year-old play once again startle an audience. Still, Wilder's core vision is intact. By looking back and looking only at the ordinary, he gives us a place to stand just a little bit outside of time and just a little bit outside ourselves. Through this lens, the ordinary becomes transcendental.