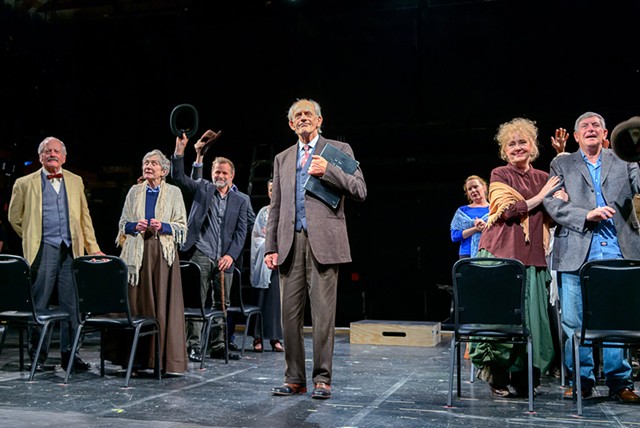 In 1937, Thornton Wilder was writing Our Town at the MacDowell Colony in Peterborough, N.H. About an hour away, the Weston Playhouse marked its first year as a professional theater. The play that uses a small town to reveal large ideas was last performed at Weston in 1973 with Sam Lloyd Sr. playing the Stage Manager. In that role in the current production is his brother, Christopher Lloyd (Back to the Future, "Taxi").

This production brings out the play's abundant humor and warmth. Director Steve Stettler, retiring after 30 years as Weston's producing artistic director, has made his final project one that celebrates the playhouse and the town of Weston itself. The cast includes acting company regulars and newcomers. Stettler puts the actors in modern dress and populates the play's mythical Grover's Corners with a cast of racial and ethnic diversity.

The events in Our Town couldn't be more commonplace. A town's milkman, constable and paperboy go about the most routine moments of their lives. The newspaper editor mows his lawn. The doctor's wife feeds her chickens. The choir director shuffles home, drunk, still guarding the grief that will later lead him to suicide. And two high school kids decide to spend the rest of their lives together after sipping ice cream sodas at the drugstore.

The story is about our common milestones: birth, graduation, marriage, death. These moments are intensely personal yet universal, and Wilder uses them to show humanity's common shape, and how the ordinary becomes transcendent when seen from a little distance.

To gain that perspective, Wilder places the story not so much in Grover's Corners as in the theater itself. The Stage Manager acts as narrator and takes up small roles. He speaks to the audience with knowledge of the characters' entire lives, and this perspective quietly invites viewers to see the world around them more fully, as well.

Stettler stages the action with every inch of the playhouse visible, letting viewers create Grover's Corners inside it. The old radiators on the stage's back wall are laid bare, the lighting grid exposed. The actors enter through the house, summoned by the Stage Manager, who's been watching as theatergoers take their seats. Putting attention on the source of theatrical artifice dissolves the enchantment and lets another magic bubble up: the audience's imagination.

The town is small, but Wilder shrinks it smaller still by concentrating on the Gibbs and Webb families, next-door neighbors. George Gibbs is a high school baseball star and son of the town doctor and his wise wife. Emily Webb gives impressive class speeches about such things as the Louisiana Purchase and is the daughter of the newspaper editor and his wise wife.

Wilder's stage directions call for minimal scenery and props, to banish the comforting deception of the theater. Actors mime activities, and this cast worked diligently to produce a sense of real weight in those imaginary objects. As Mrs. Gibbs smooths a tablecloth flat or Mr. Webb mows his lawn, the truth of the gestures lets the audience do the work of imagining a world.

A dispassionate tone is important, but the characters must emerge from universality with vivid precision. Stettler steers the actors past the obstacles of lifeless abstraction and over-emotional sentimentality. He opens the play outward in time, with a languid pace that allows thoughts to form, including the audience's reflections. The unrushed quality focuses attention on attention itself, Wilder's true subject matter.

As the Stage Manager, Lloyd takes his time to look at the characters and, powerfully, at the audience. With one hand stuffed in a trouser pocket, he gains authority from methodical contemplativeness. Lloyd summons the gravity of the role but never tangles the character in godlike powers. He pulls the audience into the play's humor with sly, deadpan delivery, and the clarity of his observations resonates like plucked strings.

Julie Benko sets Emily fluttering between shyness and exhilaration. Her gaze devours everything around her, and we see Emily aching to uncover the world. In Friday's performance, as Emily grasps an elemental truth in the final act, Benko wept as she experienced it.

As George, Vichet Chum conveys youthful eagerness. When he tugs up his jacket and hops through puddles between his house and Emily's, we can see the rain he doesn't notice, his thoughts centered only on her.

As Dr. Gibbs, Raphael Peacock glows with warmth for his family. Brandy Zarle, as Mrs. Gibbs, is sincerely buffeted by small joys and sorrows. Christine Toy Johnson is a bustling Mrs. Webb, and Tim Rush, as Mr. Webb, carves out little flashes of emotion with neat offhandedness. Michael Hicks, as Simon Stimson, shows the choir director's fierce balance of disdain and misery.

Sound is this production's highlight, and Stettler uses it to show both time and space. Music director Jake Turski has shaped humbly beautiful choral singing from the cast, and hearing it conjures up a small-town evening. Sound designer Daniel Kluger supplies some original music and developed the sound effects that are executed live.

The Stage Manager tells us, "Nobody remarkable ever came out of Grover's Corners, s'far as we know." Wilder's sturdy masterwork, s'far as anyone knows, is being performed somewhere in the world every day. He gives the audience a place to perch in order to see what's fleeting and what's eternal. In this production, the sound of rain pattering on umbrellas during the graveside scene marks the line between the dead and the living. Rain is what we take for granted until a play like this helps us hear it, and marvel at our own lives.