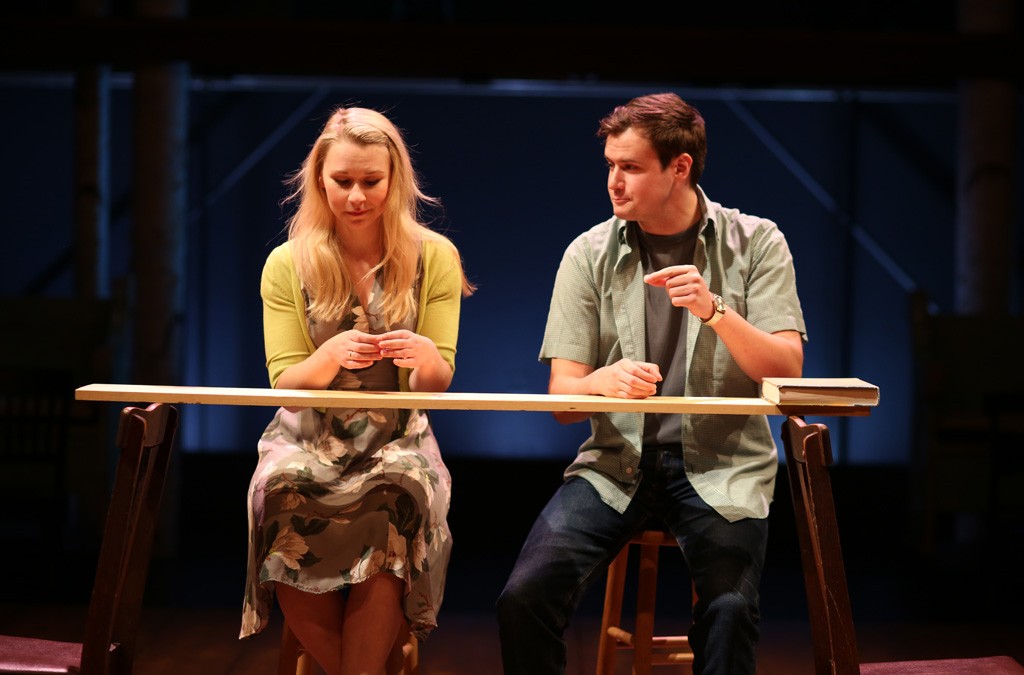 Hang a spotlight to represent the moon, and focus it on a young girl's face. Add the soft and distant sound of a church choir. Clear the stage of everything but two ladders to depict the bedroom windows of two high school kids. Make the dialogue so unremarkable that the audience can pour all their own memories into it. Then brush the background with the sound of crickets.

This is a recipe for producing an ordinary summer night onstage. Thornton Wilder first blended these ingredients in 1938, and directors have been using them to stage Our Town ever since. Northern Stage opens its new theater in the Barrette Center for the Arts with a play whose bone-dry clarity produces powerful emotions in an audience, especially with a company of actors as strong as this one.

The plot is as simple as can be. The families of Grover's Corners, N.H., go about their business of getting born, falling in love, marrying, working and dying. We look in on them in 1901, 1904 and 1913, fastening most particularly on George Gibbs and Emily Webb, two next-door neighbors who do their homework, have ice cream sodas, marry and have children.

Wilder inserts a Stage Manager as a narrator who sets up the play's perspective on time. He's omniscient, capable of telling us that the little newsboy flinging papers onto doorsteps will die in World War I. With his voice in our ears, we share the Stage Manager's godlike view of characters bustling through the mundane. This is how Wilder ingeniously fills us with concern for characters who overlook the beauty of the ordinary, a beauty that the audience is given the chance to see.

This Northern Stage production tries a few novelties, but none radically alter the play's impact. Director Carol Dunne, the company's artistic director, chose to reveal the entire playing space, backstage and all, to christen the new theater. The idea suits Wilder's desire to banish artificiality, even if it introduces a slightly self-conscious attention to every aspect of the space, from the seating aisles to the utilitarian bridge that would normally be concealed behind flats.

Dunne tinkers with the play by adding some interstitial scenes between the acts. These contribute little to the story, and perhaps only purists will fret that they detract from it. But wedging in George strumming the guitar, or staging the sentimental first dances of a wedding reception, inserts schmaltz into a play delightfully free of it. A fake home movie projected at the end may have garnered some charmed "oohs" from the audience, but it violates just about every artistic principle Wilder embedded in the play, starting with the absence of props. 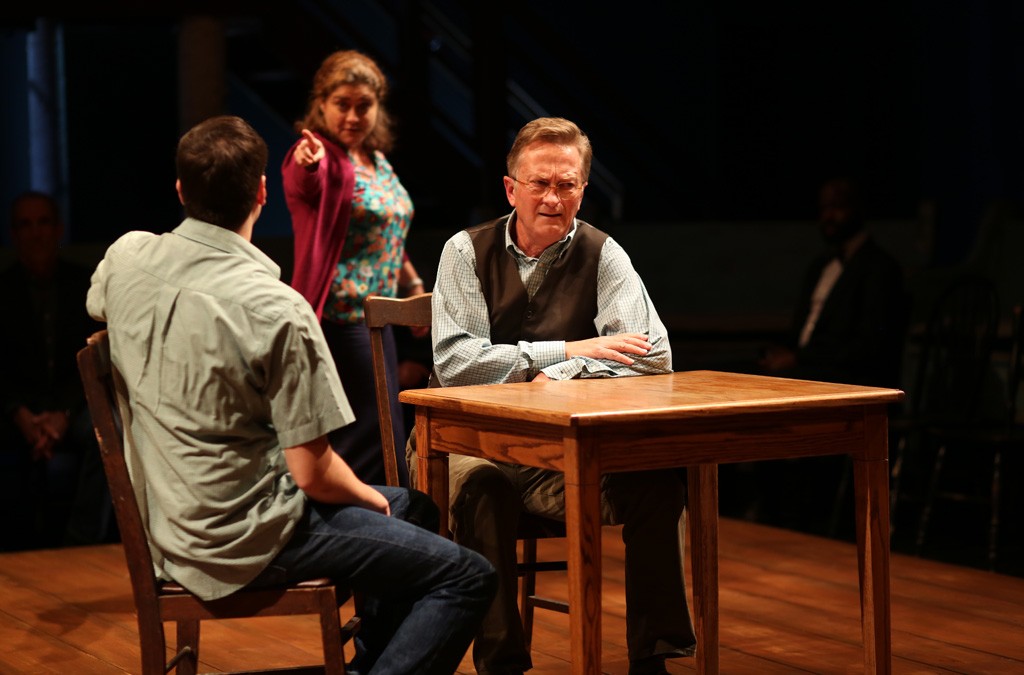 These choices seemed too cute, yet Dunne deserves credit for trying to create a jolt between the joy of the wedding and the sorrow of the play's conclusion in the graveyard of Grover's Corners. Experimenting with a classic is a way of keeping it alive.

Dunne's thoughtful direction gives the actors all the time they need to build complete dramatic moments. The pauses between thoughts, such as the little "wooo" that Mrs. Gibbs shyly offers after being thanked for making French toast, are as expressive as the words.

As Mr. Webb, Jamie Horton captures the rock-ribbed New Hampshire combination of nobility and "twern't-much" perspective. He raises his head and ponders before answering a question, speaking from a bedrock of self-assurance but without a hint of vanity. And when he comforts his daughter before her wedding, the sweet sadness crossing his face reveals a precious, fleeting love that overcomes him.

Amanda Rafuse makes Mrs. Webb a delightfully busy wife and mother, with no time to notice what's astonishing about an ordinary life because she's perfectly immersed in it.

Casey Predovic, as George, and Sutton Crawford, as Emily, show exquisite restraint in roles that can become coy. Predovic conveys youth with an expression that's ever alert, truly curious about picking the right thing to do next as he grows up before our eyes. Crawford is a carefree Emily in high school, swinging her arms loosely and turning a wide gaze on everything. As she matures, she gathers herself in physically, buffeted by the powerful experience of seeing how wonderful the least important day can be.

Christian Kohn plays Dr. Gibbs with a stern crispness, refraining from making him an idealized father but limiting our connection to him, too. As Mrs. Gibbs, Amy Tribbey is excellent at veering from dreamy enthusiasm for foreign travel to a housewife's stark practicality. Her warmth shines through both moods, and when it's snuffed out in the graveyard scene, Tribbey achieves arresting composure.

As the Stage Manager, John Hutton bends the script's simple observations toward a folksy manner and lets the character's omniscience shade into contempt. He plays the chummy laughs straight to the audience but never conveys the character's warm desire to tell us a story.

The new theater has state-of-the-art audio and lighting capabilities, which are showcased nicely in Ben Montmagny's sound design and Dan Kotlowitz's lighting design. Music director Max Gottschall plays piano for an extremely talented choir, and Eric Love fills out the arrangements on cello. Bill Clarke's set design is effective in its stark simplicity.

Wilder's recipe for helping an audience discover the transient wonder of life endures. The play annihilates the sentimentality that obscures deep emotion, and though this production makes some small stumbles toward the saccharine, it ultimately delivers Wilder's vision through strong performances.

The original print version of this article was headlined "Ordinary Marvels"