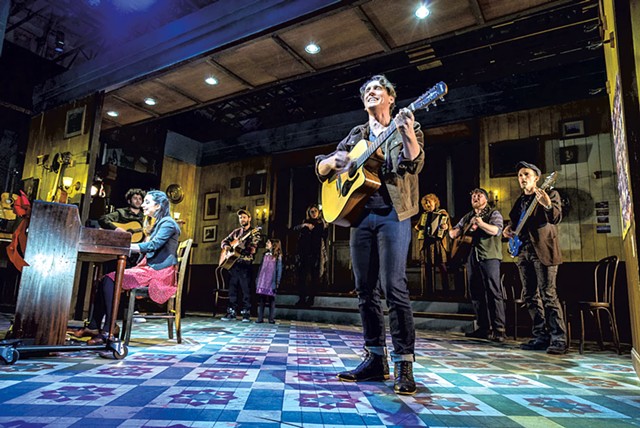 In staging the exultant musical Once, the Weston Playhouse doesn't just present an evening of toe-tapping music. It also aims to overfill our glasses, as if we're all together in an Irish pub listening to songs, with Guinness dripping from our pints. Guitar, fiddle, cello, bass, accordion and percussion (from spoons to drums) fill the theater, just as music fills the characters' hearts.

The 2012 Tony Award-winning musical is based on John Carney's 2007 movie that starred the songs' composers: Glen Hansard and Markéta Irglová. With book by Enda Walsh, the show keeps a hint of the bittersweet love story between an Irish busker and a Czech immigrant in Dublin. But the main focus is on the love of music itself and finding the courage to follow a dream.

The dialogue is simple and emotionally direct, and most obstacles give way to the power of music itself. The main characters are given the names Guy and Girl, as if they're archetypes, but the plot isn't a conventional love story. Guy is an intense singer who composes moody songs of big hopes and bitter losses. He's about to give up his musical aspirations when he meets Girl. She warms to his music, and, when they sing the stunning duet "Falling Slowly," it's instant proof that this song and its composers deserve to be heard.

In less than a week, Girl fills Guy with renewed resolve. Once may idealize the notion of pursuing dreams, but it demonstrates one crucial, practical step for achieving them. When Girl connects Guy with her expat friends, they all form a band. The sense of community invigorates everyone, binding the Irish and Czech musicians. Their love of playing becomes a love of playing together.

In Once, the pit band is on the stage, because all the actors are musicians. Or is it the musicians who are actors? With quadruple skills as singers, instrumentalists, dancers and actors, Weston's cast dazzles.

Director Michael Berresse also choreographed the show, and his attention to movement permeates the production. He gives the simplest actions crisp little exclamation points, and each foot stomp has eye-catching precision. The performers themselves change the set between scenes, and Berresse adds flourishes, such as having three actors strike a whole drum kit in one jubilant burst of synchronization.

But the movement principally enriches the music. The triumphant "Gold" opens with Guy at a microphone, facing both the audience and rows of his seated band mates, playing with their backs to the house. They accompany Guy, then at the first chorus they stand and turn, sweeping in diagonal rows across the stage, playing and singing. The lines interweave as the musicians punctuate their sharp turns by briefly freezing in place. The music is brought alive by movement, and the movement is driven by music.

Some songs have fierce, lovelorn energy, while others are drenched with dreamy hope. But all share a riveting simplicity. In one arresting moment, the full cast stands stock-still and sings a cappella. Harmony, pure and direct, reveals the glory of music.

Julie Benko is a powerhouse as Girl. A fine singer and pianist, she combines dramatic nuance with a knack for comedy. Girl tends to plant her feet, beam a direct gaze from her dark eyes to size things up and then tunnel right to the emotional heart of a situation. She has the kind of tenacity that's fun to root for, and, in Benko's hands, it should come with a warning label: Do Not Underestimate.

As the street singer Guy, Brad Standley has the vocal power to wring out the intensity of the tunes and the proficiency to nail the quirky, minor-key melodies that make the music soar. Standley expresses romantic pain and joy in song more vividly than in the script's predictable lost-love story, but he proves a fine foil to Girl.

Adam Huel Potter sinks his teeth into the role of Billy, the music-store owner who struggles to handle rejection from Girl with hilarious, hyperbolic passion. Potter's Billy simply isn't mean enough to be jealous of Guy; even after firing off some brilliantly choreographed karate moves as warning shots, he can't stay mad at anyone.

Every cast member is essential to creating the spirited musical community that gives Once its heart. Bristol Pomeroy and Dorothy Stanley radiate parental wisdom; Margaret Dudasik and Ginna Doyle add gorgeous harmonies and high-energy fiddle playing. Fred Rose anchors many tunes with his cello and gets a comic turn as a cringe-worthy singer.

Seth Eliser is a lively multi-instrumentalist whose sense of rhythm seems to originate from pure happiness. Jacob Brandt is delightful as a Czech nursing American dreams, and Douglas Goodhart and Sam Weber stomp and strum with infectious passion. As Girl's daughter, 9-year-old Faye Giordano has a thoroughly winning stage presence.

Music director Adam Wachter has formed the cast into a cohesive musical group and developed harmonies and instrumentation choices that make the whole greater than the sum of its talented parts. Costume designer Leon Dobkowski uses youthful street clothes to define each character, such as one immigrant's affection for mismatched patterns and Girl's blend of Czech reserve and Dublin spirit.

Scenic designer Meredith Ries creates a wonderfully realized pub, detailed down to the snapshots on the wall that celebrate a veritable family of patrons. Though many events occur elsewhere, the visual frame of the pub roots the story and effortlessly justifies music making. A street, music store, living room, seacoast and the like are suggested by telltale props and Seth Reiser's lighting design.

The music is exhilarating, but the show's emotional honesty resonates, as well. The connection Guy and Girl yearn for is ultimately expressed in harmony itself, and this production shares that joy with anyone who listens.