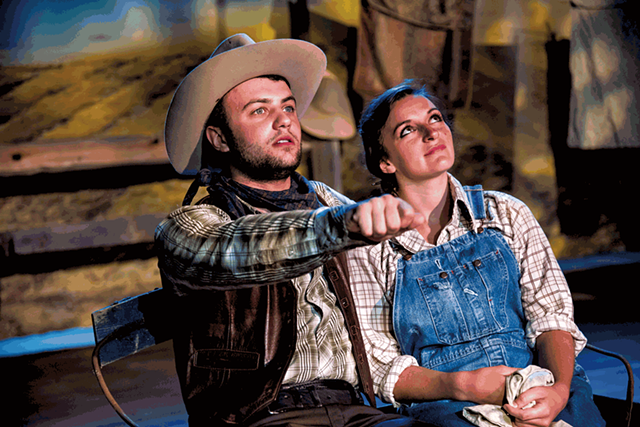 The long, drawn-out "ohhhh" that starts the song "Oklahoma" is like the sun rising on the prairie and tantalizes audiences waiting for that burst of joy as the state's name is proudly sung. At the Skinner Barn, a largely youthful cast of 18 serves up Richard Rodgers and Oscar Hammerstein II's Oklahoma! with enthusiasm. In the Commons Group's 15th season, Peter Boynton directs, produces and plays a small role.

Oklahoma! began a five-year run on Broadway in 1943 and received a special Pulitzer Prize. It was the first collaboration of Rodgers and Hammerstein and is widely considered the beginning of the golden age of American musical theater. Each song carries the story and characters forward, a radical change from the prior convention of musical entertainment that interrupted stories with dance or humor.

This musical takes place in 1906, the year before Oklahoma became a state. Settlers in the new Oklahoma Territory are either farmers or cowboys, and tensions smolder between the homesteaders and free rangers. Hammerstein's story is light, but, as usual, young lovers must bridge the difference between their tribes.

Curly is a cowboy and Laurey is a farm girl, but only the fence posts can fail to see that they belong together. Their main obstacle is Laurey's slow, sly response to Curly's overeager courtship. Out of pity for the loner farmhand Jud, she decides to go to the big dance with him, leaving Curly stewing. Jud is simmering, too, but with a dark, hidden attraction to Laurey.

In a secondary love story, young Ado Annie is so eager for love that she can't choose between the sincere cowboy Will and the intemperate traveling salesman Ali. Her father is quick to brandish a loaded shotgun when a marriage proposal is in order, and Ado Annie and Ali have a lot of untangling to do before true love can prevail.

Most of the cast has theatrical and musical training, and all perform with the gusto of people who come to life on a stage. Though vocal abilities vary and dancing talent is limited, the company wins over the audience with big smiles and bubbling physical energy.

Clarise Fearn plays Laurey with a ringing soprano that has the passion and spatial presence musical theater needs. She shows dramatic range, too, teasing Curly and saving her starry-eyed fantasies for a dream sequence that reveals both hope and a big, dark fear.

As Ado Annie, Victoria Fearn (Clarise's real-life sister) is electric. She's got a sparkling delivery perfect for comic numbers, such as the man-crazy "I Cain't Say No." The Burlington High School senior's theatrical chutzpah is a little ahead of her vocal craft, but she's a fine comedian who bursts with physical energy, swirling her dress hem wide at every enthusiastic turn.

As Curly, Tim Lewis is a tirelessly optimistic suitor. Curly can't stop grinning, and whatever the setbacks, Lewis preserves the buoyant mood of his opening number, "Oh, What a Beautiful Morning." With charm that makes up for a lack of vocal power, Lewis is fun to watch as he entreats Laurey with puppy-dog eyes and heartfelt conviction.

Nicholas Caycedo gives Will irrepressible glee. The cowboy comes back from Kansas City wowed by urban wonders, but all he wants is to make Ado Annie his bride. Caycedo roars with laughter and foot-stomping energy, and no matter how much Will bollixes his courtship, his love shines through.

Sam Lewis, as Jud, portrays the character's eerie combination of menace and pathos. Lewis' Jud skulks with his head lowered but harbors a big dream revealed in an arresting and powerful solo.

Boynton stages the musical with smart simplicity and appears as Ado Annie's tough-talking father. A flexible and effective set, designed by Boynton, makes full use of the barn's ambience. A huge backdrop of a plowed field with clouds coasting in a bright blue sky anchors the square playing space. Actors enter from all four corners, passing right by the audience seated around three sides.

Lighting designer Wendy Stephens brings out different moods, often by playing with lighting effects right on the backdrop or by underscoring the action on stage. The range of lighting cues gives the production a professional touch.

Oklahoma! is designed to showcase dance as well as music, but this production is constrained by a relatively small stage. The limited choreography is also Boynton's work, and, though he underutilizes dance, he produces some nice full-ensemble tableaux and stages a modest but joyful square dance.

Ruth Ann Pattee has assembled costumes that vividly express the larger-than-life characters. The cowboys wear their gun belts at jaunty angles over leather chaps, and their hats are always suitable for tossing up in exclamation. The farmers appear in plainer shirts and vests, but their belt buckles shine as brightly as those of the cowboys. The women's dresses are cut on somber prairie lines but executed in bright colors and patterns.

A two-person pit band of musical director Nate Venet on keyboard and Helen Doyle on bass and fiddle performs the well-known tunes. This limited instrumentation barely suffices for the ballads and deprives the big numbers of strong orchestral presence.

Though this production is missing the big choreography for which Oklahoma! is known, it's performed with cheerful energy and gives Vermonters a chance to experience the landmark musical. And what better place than a barn to watch farmers and cowboys kick up their heels?

The original print version of this article was headlined "Musical Territory"