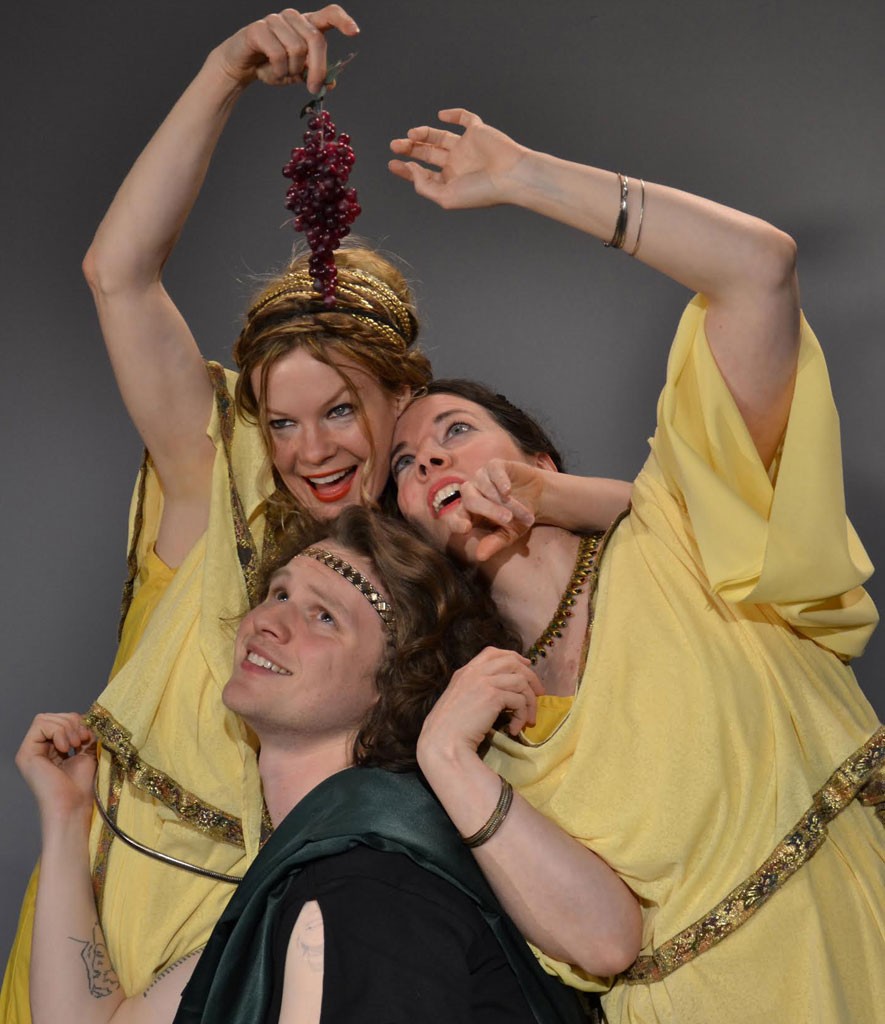 Watching Kevin Christopher's musical O, Caligula!, you don't have to be scandalized at the depraved doings of the Roman emperor and his subjects. You just have to laugh. The empire may be collapsing under the weight of gluttony and bad government, but there are no lessons to learn or personalities to probe. The musical's deepest point is that superficial familiarity with Roman history is all you need to giggle at it.

Christopher, the cofounder of Saints & Poets Production Company, wrote the book and lyrics with two bedrock comic principles in mind: caricature and silly anachronisms. The characters are as exaggerated as Christopher could make them, and the actors gleefully accept the challenge to push them over the top. Then the references start raining down, from Capri Sun juice packs to Shakespeare. It's a loose look at 38 to 41 AD, but you soon grow accustomed to seeing people Rollerblading and smoking as the musical thunders through Caligula's short reign.

A chorus of sorts, made up of senators and other dignitaries, is handy for filling in the twists and turns of the Julio-Claudian dynasty. In a gag typical of those pitched straight to the audience, the Head of the Senate acknowledges how easy Wikipedia made it to research the story. The plot concerns Caligula's selection as successor to the reprehensible Tiberius, neatly summarized in a song with the refrain "And that's how you make a Caesar salad."

Caligula's incestuous relationships with his three sisters become Exhibit A in the musical's case for his degeneracy. This story focuses on Drusilla, his "favorite," according to the who-cares-what-they-think ballad "Sister, Brother (Lover)." The incest isn't played as disgusting but as an expedient solution to Caligula's insatiable appetites. His eager, bedazzled expression can often be summarized as "Yum!" when he casts his eyes over something, or someone, he can have. In this show, such unchecked desire comes off as almost laudable self-awareness.

Drusilla, the brains of the operation, has cravings just as intense, but hers include politically astute methods to assure an unquenchable flow of power. As syphilis-ridden Tiberius tries to squeeze out one more day of man-boy love (with his own grandson, no less), Drusilla schemes to snare the crown for Caligula. A lot of bodies have to fall, but in this production they topple with riotous ease, and a bright red ribbon to symbolize the blood.

Director Seth Jarvis tries some new tricks with the layout of the Off Center for the Dramatic Arts small space, chief among them poaching the entrance hallway for a performance area. With video projections, backlit silhouette pantomime and puppetry, Jarvis deploys the full range of effects that typify a Saints & Poets production.

The direction includes some nice ideas for movement, like giving the senators repetitive, mechanical gestures evocative of overblown speechifying. With characters this superficial, physical embellishments are badly needed, and, if anything, Jarvis needs to come up with more of these conceits. Humor like this requires constant activity, and we notice when it's missing.

Sexual acts are slyly staged to portray all the comedic bathos of people desperate for pleasure. The lustful lunges are giddy enough, but Jarvis points the audience toward laughter, not prurience. It's not a show for young children, and it includes brief flashes of flesh and the odd priapic manifestation, but the moral decay is no more unsettling than a Halloween "boo."

The comedy lies in the actors' enthusiastic delivery and the script's nonstop gags, some of them groaners but most of them refreshingly silly. All the performers demonstrated fine comic craftsmanship, but each had some slips that showed the lack of polish the show had received by opening night.

Sean Martin presents Caligula as a childish sybarite so gaga for stimulation that he's more ludicrous than loathsome. Blythe Usher gives Drusilla all the evil mastermind overtones necessary, while Bob Bolyard, as Tiberius, is gloriously wretched in pockmarked, syphilitic decay.

Syndi Zook, as the chorus leader, is a perfect comic anchor with crackerjack timing and a knack for drawing the audience in on every joke. Patrick Clow does a hilarious send-up of the dutiful Roman soldier, then vamps his cross-dressed turn as a whore. As Gemellus, Jessica Bernard masterfully conveys her mute, woeful character with only whimpers and shrugs.

Cael Barkman, the adviser, has a marvelous physical presence and exquisitely timed comic takes. Rick Homan is unafraid to make Claudius a disgusting dimwit. Chris Caswell is all in as an earthy whore who barely leaves what looks like a crack-cocaine haze to register that she's been selected as the new Caesar's wife.

N.M. Lingnum designed the effective masks for the chorus and a terrific full-body rig to create Incitatus, the horse Caligula considers worthy of a place in the Senate. The notion grows faintly plausible as actor G. Richard Ames whinnies, prances and channels a little Mr. Ed through his horse-puppet mouth. The horse inspires Jarvis to bring back that "Gangnam Style" pony-reins gesture for the chorus, a move that's even better in a toga.

With only room in the theater for an electric piano, the music by Patricia Julien doesn't reach its full potential. Some pre-recorded music using more instrumentation — notably the overture — hints at the complexities in the score, but the music is not the most interesting aspect of the show. The songs also suffer frequent failures of scansion. As witty as the lyrics are, when the words miss the stresses of the notes, we lose the effortless soaring of musical comedy and notice the labor of stuffing in the text.

Since Caligula ends the play with the same wide-eyed, hungry pursuit of pleasure with which he begins it, this isn't a story with a trace of character development. In that respect, it's closer to sketch comedy than a musical. That's not a criticism, since the piece plainly aspires to such simple delights, but theatergoers should know the production gleefully trades psychological depth for rat-a-tat gags. The cast is so thoroughly committed to the nonsense that it's sheer fun.

The original print version of this article was headlined "Roman Holiday"