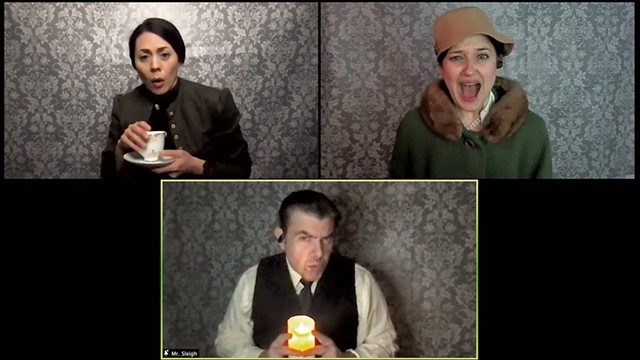 When theater on Zoom is laugh-out-loud funny and manages a goofy but real actor-audience connection, it's evidence that live performance has nearly magical power. With professional actors hitting the comic notes, the Northern Stage production of a new, irreverent adaptation of The Lodger uses Jack the Ripper as a backdrop for an amusing meditation on suspicion itself.

Mud Season Mystery: The Lodger wrings out every capability of Zoom, including an application of breakout rooms that involves, of all things, a dose of suspense. The performances are live, and the audience is present through chat. A few willing volunteers get a direct role in the show. Now that we've all spent a year learning how to mute and unmute ourselves, here's a comedy to celebrate the online idiom that kept us together. It's time to use it to laugh.

In 1911, Marie Belloc Lowndes wrote a short story called "The Lodger," inspired by the Jack the Ripper murders, and later expanded it into a novel. It forms the rough scaffolding for Brenda Withers' play, which keeps the story in Victorian London but frames it with a contemporary narrator, who's made a modern pinup board of victim photos with that maybe-as-crazy-as-the-killer vibe of the obsessed.

The tone is light and funny, and the real quarry here is not the perpetrator of the 1888 Whitechapel murders but the theater's fourth wall. Ronnie, the narrator, starts the show by asking viewers where they're from, and the chat panel immediately bursts with place names for Ronnie to riff upon. It's nearly a person-by-person welcome, and the audience is woven into the show.

The typical murder mystery invites the reader to solve the crime. Withers makes the crime an afterthought and challenges viewers to be sure of the conclusions they're drawing. The focus is on an ingénue who could be the next victim, and she's surrounded by clichéd menace. Taking everything at face value seems to be a trap, as the clever Ronnie continually warns us. The chat bubbles with theories throughout the show.

The real quarry here is not the perpetrator of the 1888 Whitechapel murders but the theater's fourth wall. tweet this

Each of the four 19th-century characters uses Victorian wallpaper as a Zoom background. Daisy is an aspiring actress, currently relegated to a chorus role in a sentimental musical but thrilled to seek her big break in London. She lives with her aunt, Mrs. B, who frets about money and Daisy's lack of practicality. At the very least, Daisy shouldn't be walking home after the theater now that a brutal murderer has been dispatching young women late at night.

The answer to Mrs. B's financial woes comes knocking in the form of a Mr. Sleigh (say it out loud) who'd like to overpay for lodgings in an attic room. He's suspiciously unburdened with luggage and suspiciously partial to shadows. The final caricature is Joe, who introduces himself to Daisy on the street as a police detective concerned for her safety. He seems to know an awful lot about her nightly performances and relishes painting a picture of nighttime danger.

If the abiding tension of a serial killer's rampage is boiled down to the shortest list of suspects, the vaguest of motives and the shallowest depth of character, it's to make room for another focus altogether. It's wit that makes the play tick, wit based on the deceptions both theater and criminals share. The audience is swept into the story as the actors test and tease viewers about trusting their own perceptions.

Director Jess Chayes adds buoyancy to stereotypes so weighty they would sink a less playful director. The performers exaggerate their hackneyed dilemmas while letting just enough honest emotion flicker behind the overacting. Imagine five people inflating balloons, each knowing just how big and silly they can go before bursting the bubble.

As Joe, Grayson DeJesus uses every inch of his Zoom box, peering close in the frame and fixing the viewer with a fiercely arched eyebrow. His hard-boiled policeman has a vivid working-class accent and a penchant for philosophy. "We crave fear. We trust it," he says, inviting the audience, as well as the imperiled Daisy, to ponder when to yield to suspicion — suspicion that might well be trained on Joe himself.

Satomi Hofmann plays Mrs. B as a woman shuffling a deck of rationalizations and always finding a card to her liking. The lodger seems sketchy — but isn't prepaying the rent a sign of something good? Hofmann's mobile expressions zip between fretting for Daisy and smiling with glee at the girl's theatrical success. When she pets her real live cat, Zoom takes on drawing-room domesticity.

Gracie Winchester is all heart as Daisy. She is earnest, trusting, sweet and, of course, quite possibly doomed by those very qualities. Winchester nearly floats with eager naïveté yet never gets too sugary as she sprinkles her clever quips with just enough irony.

Jason O'Connell, as Mr. Sleigh, unnerves the other characters by popping out of the shadows, no mean feat on Zoom. Lighting and camera switching do part of the work, but O'Connell's dark presence seals the deal. He packs a lot of menace into an idle "Oh?" and keeps us guessing, especially when solemnly lecturing Daisy on theater's deceit.

As Ronnie, Moira Stone maintains direct contact with the audience, and her improvisation skills shine. She's a charming host, and her only flaw might be keeping the pace brisk when her interactions could be slowed down and savored. When not administering instant polls or checking the chat, Ronnie gets to ponder the nature of guilt, including a surprising way to sidestep it.

Northern Stage maintains its professional standards, with first-rate costumes, sound, music and props. If the show offers only a tissue-thin mystery, it shakes every theatrical possibility out of the virtual platform. Laughing alone at this inventive use of live performance is the next best thing to laughing together in an audience.

The original print version of this article was headlined "Screen Savers"