Theater Review: Much Ado About Nothing, UVM Theatre 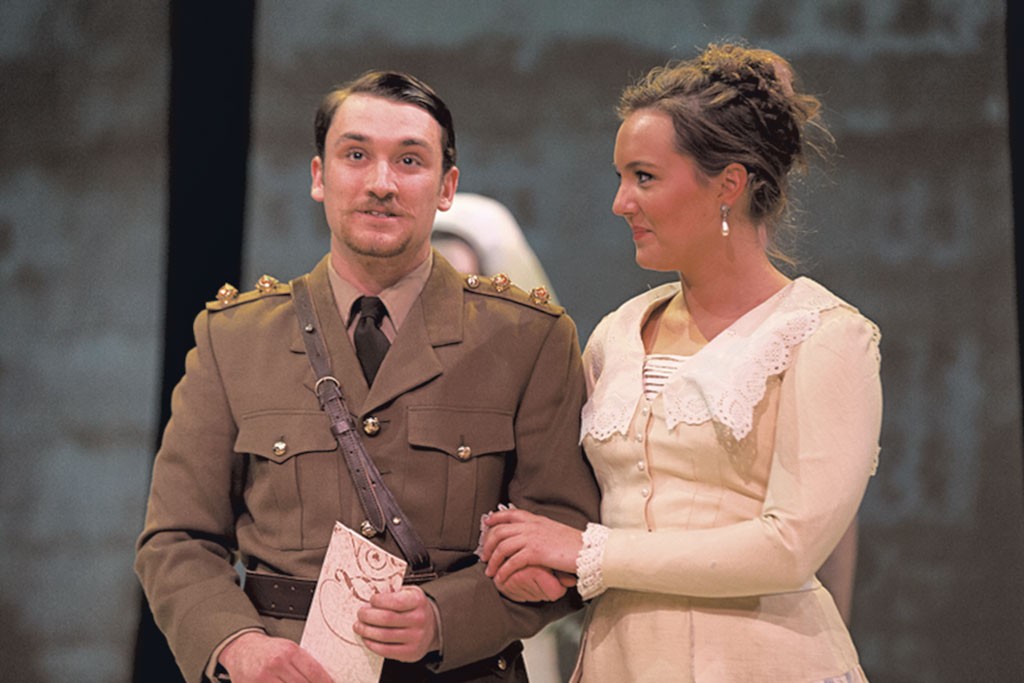 From the title alone, Shakespeare hints that Much Ado About Nothing will celebrate — and ridicule — the fanciful language of lovers and courtiers. The characters strive to make each witty exchange appear offhand, even as they're straining for effect. With that mild level of fraud as the base, Shakespeare goes on to build a tall tower of deliberate deception, some of it spiteful, some sweet.

After a war, victorious soldiers are returning home, and one group led by Lord Peters pauses at the happy household of Lady Leonora (Leonato, the governor of Messina, in the original), whose daughter, Hero, and niece, Beatrice, are in residence. Dashing officers Claudio and Benedick are ready to savor their leisure after distinguishing themselves in battle.

What follow are three deceptions, one kind, one cruel and one comic, all designed to alter the natural course of events. The friends of Beatrice and Benedick conspire to make them fall in love, even though the two are ostensibly at loggerheads. Lord John, the ill-tempered brother of Lord Peters, plots to ruin the wedding of Claudio and Hero by tricking Claudio into believing Hero is unfaithful. And the hapless constable, Dogberry, and his men manage to catch some culprits without precisely surmising their crime.

The happy ending is always much in view, but when Lord John plants the poison of false jealousy, the mood grows dark indeed. Still, the play is perhaps Shakespeare's most reliably entertaining comedy, not least because it pioneers the pattern used in everything from screwball films of the 1930s to the rom coms of today. The secret is simple: Make the lovers the last to know they're in love.

Such a story can be convincingly set in any time or place; there's not a high school hallway or drawing room that hasn't witnessed something similar. Director Mark Alan Gordon set his University of Vermont Department of Theatre production in 1917 England, which gave the audience the especially pleasing spectacle of some gorgeous late-Victorian gowns and stirring military uniforms. Shakespeare set his play at the conclusion of a war; this production, which ended last weekend, takes place before the end of World War I, and it's puzzling that such a grim note was left to hang over the proceedings.

The love story begins with Beatrice and Benedick loudly proclaiming their lack of interest in love, or each other. Gordon stopped at the superficial meaning of their banter, without directing the actors to show any initial attraction between them. This pair needs all the nudging the text allows, garnished with Gordon's nice tricks of staging.

The central conceit is getting each to overhear the very useful lie that the other is already in love with him or her. The stories are hoaxes, but they're also just depictions of a possible future. Released from his cool, distanced attitude about Beatrice, Benedick is free to shout in soliloquy, "I will be horribly in love with her!" Beatrice is likewise transformed. 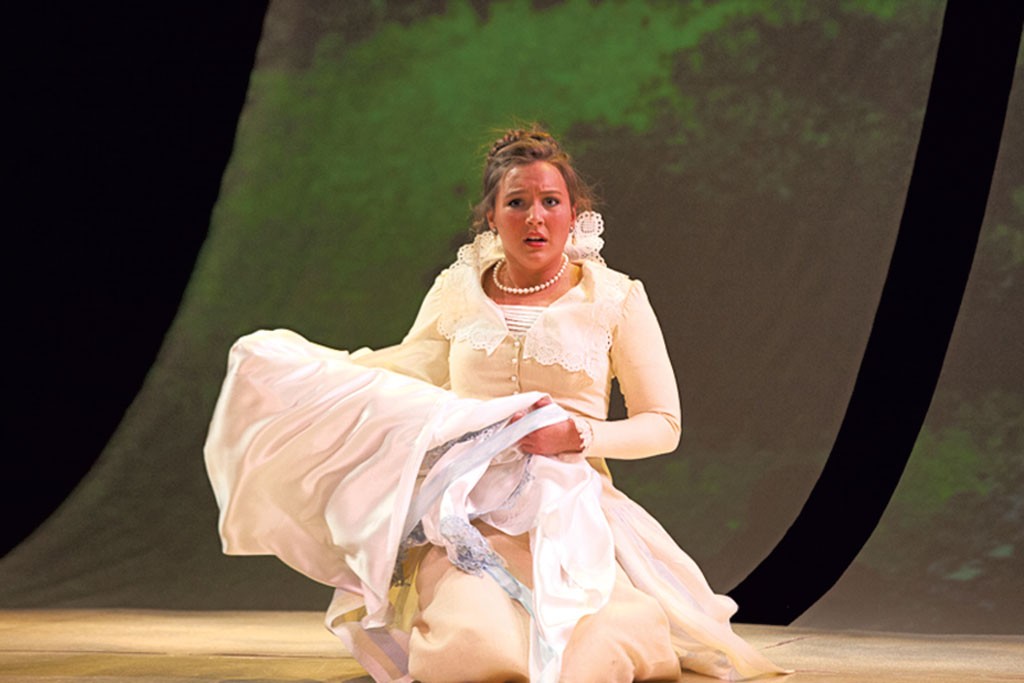 The staging included neat visual jokes that complemented Shakespeare's humor. When Benedick overheard Leonora, Claudio and Lord Peters discussing Beatrice's love for him, Gordon didn't hide him behind a hedge. Instead, he capitalized on the notion that servants are always hidden in plain sight, as the footman Borachio has already complained. Benedick swiped the footman's tailcoat and serving tray so he could hover "unseen."

The performances varied in depth of interpretation, but the overall effect was a polished, tightly paced show. Shakespeare's language is light and intoxicating in this play, and if this production didn't always soar, it did earn some very smart laughs.

Brice Guerriere, as Benedick, moved neatly between gliding confidence as a confirmed bachelor and halting zeal as a lover laboring over a terribly bad love poem. As Beatrice, Lida Benson was in nearly too much deadly earnest when sparring with Benedick, but began to glow when seeing herself as the object of his affection. The two didn't have the ideal chemistry to show how hard Shakespeare's couple fight their passion for each other from the moment they lock eyes, but they did come to life once a courtship was afoot.

Julia Zephir perfectly conveyed the romantic lightness of Hero, especially in a giddy scene with her maid Ursula, played with winning charm by Elizabeth Callahan. Cato Crumbley, as Lady Leonora, was a smooth manager of her young charges, and got to shine in a comic exchange with Constable Dogberry. Ian Dunn, Avery Muzikar, Jake Marks and Brendan Kelley as the constable and men of the watch were richly funny without overplaying their gags. John Hughes showed shimmering conviction as the priest who works to right a wrong.

Martin A. Thaler's costume design was magnificent. The officers appeared in regular and formal uniforms, and the regal beauty of these instilled a lovely correctness in the actors' bearing. Thaler not only captured the play's buoyant mood in the women's dresses, he also gave each actress a striking visual basis for her character. No detail was missed; from servants to ladies to bumpkins to officers, the costumes had just the right beadwork, boots and flounces to help tell the story.

All 15 women's dresses were made in the UVM costume shop, and most were designed specifically for this production, while a few were re-fitted and re-trimmed from previous plays designed by Thaler. Thaler and student Alyssa Korol made the spectacular hats for the show. If "Downton Abbey" has made us connoisseurs of wartime English fashion, it's even better to see it on vivid display in live theater.

The set, designed by Jeff Modereger, used the full thrust potential of the theater, with a fairly steep rake down from three wide banners upstage that served as screens. The lighting design by John B. Forbes was effective, but his choices for image projection on the screens were often far from the true themes of the play. Clare Devlin's sound design was unimaginative, particularly when using the "Masterpiece Theatre" theme music to summon up England.

The trick of happy endings is to make them appear at least a little bit impossible for at least a little while. Shakespeare plants good obstacles for his two pairs of lovers, and this production honored them faithfully. With just enough doubt about how everything can be set right, the play allows the audience to spend the evening bobbing on a little buoy of hope. It's the next best thing to "loving horribly."

Much Ado About Nothing by William Shakespeare, directed by Mark Alan Gordon, produced by the University of Vermont Department of Theatre. February 18 to 22 at Royall Tyler Theatre, UVM, in Burlington.