Theater Review: 'Much Ado About Nothing,' Stowe Theatre Guild 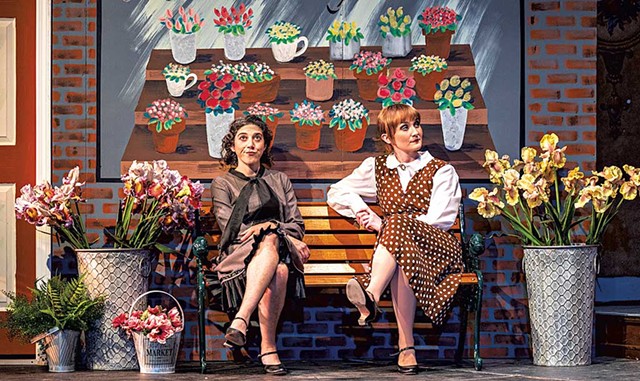 They say all's fair in love and war. But the adage falls apart when we take power and gender into consideration. Stowe Theatre Guild's production of William Shakespeare's Much Ado About Nothing heralds the romantic comedy as a battle of the sexes. Though the play's female characters may triumph in skirmishes of wit, they never have a chance to win the long game.

Much Ado is as much about the joy and beauty of love as it is about truth. But when social hierarchies and deep-seated insecurities work to obscure the truth, truth and love often end up at odds, just as the play's male and female characters do.

The story begins in the wake of a successful military campaign when a group of soldiers, led by prince Don Pedro (Jack Bradt), arrive in Messina, Italy, for a monthlong sojourn. Governor Leonato (Adam Silverman) welcomes them into his home. Among them are pompous Benedick (Dominic Spillane), lovestruck dum-dum Claudio (David Rapp) and "plain-dealing villain" Don John (Tim Sheridan), the prince's bastard brother.

Meanwhile, Claudio gushes over Hero and vice versa. Quickly, they're set to marry. But Don John, rogue that he is, plots to break them up for no reason other than that he's a self-admitted dickhead. Perhaps living in his brother's noble shadow has soured his outlook, but his motives are never explained.

Similarly meddlesome but more well-intentioned is the coalition of Don Pedro, Claudio, Leonato, Hero and her lady-in-waiting Margaret (Ramona Beskin, in a hybrid role combining Margaret with another character, Ursula). They scheme to pair up the dueling Beatrice and Benedick.

After some farcical deception, things take off for the bickering duo. Of course they've been secretly in love for years, only needing others to point it out. Meanwhile, Don John's smear campaign against Hero's virtue destroys Claudio while besmirching Margaret in the process. Hardly questioning the lies he's told about Hero's alleged infidelity, Claudio reacts viciously and makes a public spectacle.

Spoiler alert: Even though villains are punished at the end of Much Ado, there's no true accountability for the women's suffering. Most of the women in the play, Hero and Margaret in particular, are at the mercy of the men around them. It's frustrating to watch women written without much agency. But it's not fair to hold a 400-year-old play to modern standards, and what riles us up is also what makes Much Ado a perfect conversation starter.

Director Joanne Greenberg nodded to the play's original Sicilian setting by placing her production in New York City's Little Italy neighborhood. She also set the show in the 1920s, a choice with important implications.

The anxieties of that era, when people were grappling with the aftermath of the First World War and the 1918 flu pandemic, parallel our own. In addition, in the 1920s women were redefining their roles in society, and suffragists and flappers alike were defying norms. A look at Texas' current abortion law may inspire us to ask how far we've really come a century later — another timely conversation topic.

Matt Bacewicz's set conjures a quaint neighborhood street corner, where bloomers and other underthings hang from clotheslines. A flower shop and produce stand flank a central townhouse façade, which is equipped with a sizable stoop and patio. You can practically hear an ink-stained ragamuffin with an armful of newspapers shouting, "Extra, extra!"

This set design distinguishes the Stowe production from the familiar film adaptations of Kenneth Branagh and Joss Whedon, who set the play in a pastoral expanse and a private mansion, respectively. Staging scenes instead in a public thoroughfare primes the audience to expect that the characters' secrets will be poorly kept. Everyone's business is literally out in the streets.

Other elements make Stowe's Much Ado a winsome production. Amy Papineau's costumes — sequined frocks, mid-calf skirts, kitten heels, double-breasted blazers and vests — are vibrant and colorful. Intermittently played recordings of '20s tunes such as "Ain't Misbehavin'" and "I Can't Give You Anything but Love, Baby" anchor the setting.

The show's lead actors, real-life spouses Spillane and Langdon Spillane, are suitably matched. Almost exactly the same height, neither has the upper hand physically. The characters' power in the story, too, tends to be on par.

Outdoor theater reigned in the summer of 2021, but the shift to indoor theater as winter approaches is bound to be bumpy. Much Ado is a case in point: Stowe Theatre Guild had to cancel the show's first week because of a "close call" with COVID-19, according to a public announcement. Even though audience members are required to show proof of vaccination and wear masks while in the building, breakthrough infections are surely on people's minds.

With capacity already reduced from 180 to 100 heads at Stowe Town Hall Theatre, the play's opening night had only about 30 attendees. A small crowd can't generate much palpable energy, and that deficiency seemed to transfer to the onstage action, which could use a bit of tightening here and there. The production shone in its ensemble scenes, however. And whenever opportunities for physical comedy arrived, the actors seized them with great success.

Much Ado is most beloved for its beautifully crafted dialogue. Its characters' tongues dance nimbly in pun-infused banter, expounding on love in many ways. Some obsess over it and others decry it, but everyone wants it — even if they can't admit it.

The original print version of this article was headlined "Suffering Love"

Theater Much Ado About Nothing Stowe Theatre Guild William Shakespeare