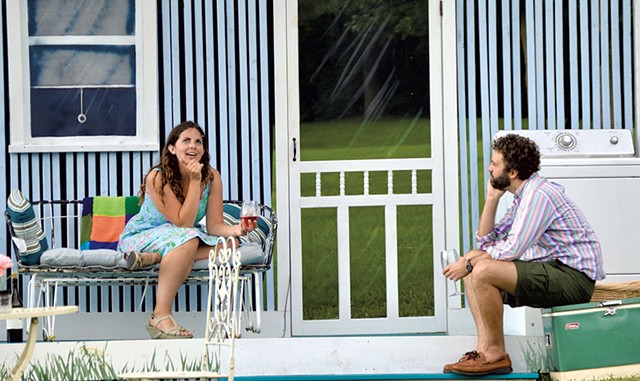 Loneliness can sometimes be a choice. But it usually doesn't feel that way. People reason themselves into isolation, erecting sensible, load-bearing walls to protect their heavy hearts. The characters in Southern playwright Audrey Cefaly's two-person play Maytag Virgin, usually experts at keeping themselves safe, are just beginning to feel their carefully constructed bulwarks crumble.

Vermont Stage's production, performed outdoors at a private residence in Williston that the company is calling Blue Heron Pond (buy a ticket to learn the address), depicts these characters' slow process of coming together and finding new reasons to embrace love.

Jack has come to teach physics at Lizzy's school and get some distance from his shell of a life back in Biloxi. On a leave of absence from teaching after her loss, Lizzy has plenty of time to criticize his slow move-in pace. Boxes clutter his yard, gradually receding as the play progresses.

But what really sticks in Lizzy's craw is the clothes dryer — presumably a Maytag — that Jack keeps on his porch. A proud clothesline purist, she finds the unit as much an eyesore as it is unnecessary and rejects the notion that she should ever use one. As the two get to know each other, the appliance becomes more of a nuisance to her.

The play repeatedly shows its characters as outwardly different yet internally similar. tweet this

Just after moving in, Jack finds a cache of love letters belonging to the deceased elderly couple that used to own his house. As he and Lizzy learn more about the couple's marriage, they share more of their own stories. Just as the former occupants' relationship was full of secrets, so Jack's and Lizzy's married lives were far from simple.

Both Jack and Lizzy speak with heavy Southern accents and seem to adhere to conventional values. Lizzy is overly formal, calling Jack "Mr. Key" throughout the show. She delivers a homemade pie to him as soon as she can after he moves in — apologizing for not being there just as he arrived, as if it were her womanly duty to greet him.

Jack is traditional, too, but less uptight — suggestive but not pushy. His wardrobe says basic bro, all cargo shorts and unflashy short-sleeved plaid shirts. Even when he's letting loose with a cheeky "Kiss the Cook" barbecue apron or a hideous Christmas sweater, the choices seem right for a "regular" dude.

For her part, Lizzy is low-key bohemian, rocking floral prints, embroidered tops and cropped yoga leggings. Costume designer Suzanne Kneller shows that the wardrobe of contemporary drama, while not the grand spectacle of period ensembles, can subtly say a lot about characters.

In the production's pastoral surroundings, set designer Jeff Modereger's side-by-side bungalows look like a pop-up micro-neighborhood, a nearly believable enclave sprouting by the tree line. Lizzy's home, a warm peach color, is decorated with folk art and wind chimes. Jack's, an unshowy blue, is minimally adorned. His only tchotchke is a statue of the Virgin Mary, a nod to his Catholicism and a contrast to Protestant Lizzy.

The play repeatedly shows its characters as outwardly different yet internally similar. At times, Lizzy suffers from diarrhea of the mouth, filling silences left by the laid-back Jack. Steinhoff manages to underscore Lizzy's tightly wound persona with a muted sadness, which comes out in her facial expressions and askew glances. It's as if she feels responsible for keeping things humming along, lest a quiet moment reveal what's underneath her façade.

Despite some irritation with Lizzy's excess, Jack is clearly smitten right away. Rackliffe exposes Jack's keenness with sly grins and intense eye contact. It's only after months of patient waiting that his bemused annoyance becomes full-fledged frustration. Meanwhile, the particulars of Lizzy's history — recent and ancient — begin to explain her romantic reluctance.

Over the course of a year, Lizzy and Jack discover what it means to be open and intimate at a place in their lives where they never thought they would be. Though they look back on their marriages differently, they've both landed in the same space, metaphorically and literally. And they may be the ones to help each other move forward.

Maytag Virgin is a perfect play to see in a natural setting, since it takes place entirely on Jack's and Lizzy's lawns. Jess Wilson's sound design, full of chirping cardinals, cooing mourning doves and buzzing cicadas, blends seamlessly with the real-life birds and insects chorusing on the property. Transition music hums with Southern twang, grounding the folksy sounds near the 31st parallel.

Sensory experiences are front and center in the play, as in the production. The characters relish discussing their favorite foods, Southern staples such as shrimp and grits, sweet potatoes, and homemade butter pecan ice cream. They dine al fresco, letting the sultry evening air sweeten their meal. They chug apple pie moonshine, a concoction so strong that a wine chaser goes down like water. At one point, Lizzy lets the pouring rain drench her as she succumbs to an emotional breakdown.

At roughly two hours, the production could benefit from some gentle pruning. That's mostly due to a marginally overwritten script, though, not to director Cristina Alicea's choices or Steinhoff's and Rackliffe's performances.

The actors' chemistry keeps the show from dragging. Will-they-won't-they is a trope explored to death by decades of romantic comedies, but as the nuances of these characters' situations reveal themselves, a palpable attraction bolsters their believability.

Maytag Virgin shows that, while love may be patient and kind, it's also messy and often inaccessible — that is, until we confront our own choices. Only then can we find a way forward.