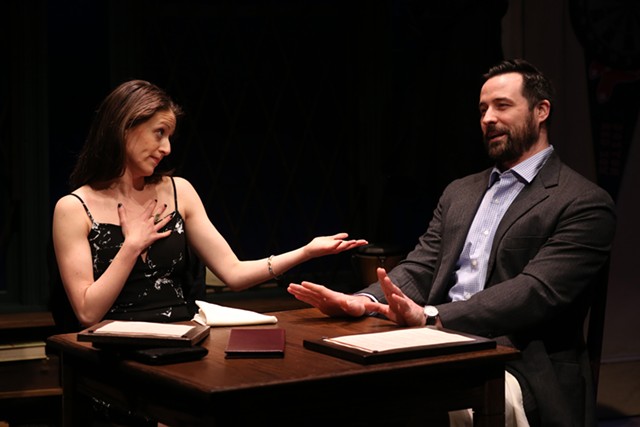 Romantic love rests on the delusion that one's true beloved is a rarity, never mind how many sexual partners are available. How does such a premise survive a surplus of hookups?

In Mad Love, now in a world-premiere production at Northern Stage, Hanover, N.H.-based playwright Marisa Smith answers that question with abundant wit and endearing characters. Millennials may have less need for romantic self-deception, but Smith suggests they still need romance. Thursday's preview audience laughed through each sweet and sour twist of the play, which Northern Stage first presented as a staged reading in 2014.

Brandon is playing the field, giving marriage and parenthood such a wide berth that even a suggestion that he become a sperm donor makes him anxious. He's both witty and wary; no woman is going to pin him down. Working as a middle school teacher, he harbors no other ambitions.

Sloane has life all figured out. At 26, she decides she needs to have a baby before she's 30 so she can still wear a bikini after the birth. She's upbeat and businesslike, with a prestigious job in a cosmetics company. Brandon would never guess that a woman who can name a new perfume "Tumescence" would have past sorrows haunting her. Perhaps that's because they're close enough to sleep together but not enough to share any other intimacies.

Two delightful characters become the recipients of the disclosures that Sloane and Brandon won't make to each other. Brandon's younger brother, Doug, is first seen shuffling about their shared New York apartment in bathrobe and boxers, plunging his spoon into a bowl of cereal. He has the bright-eyed, shaggy look and unfocused enthusiasm of a golden retriever as he flops onto their sloppy couch, eager to hear about Brandon's day.

Doug's good nature survived a traumatic brain injury that resulted from a stupid fraternity escapade, though he's compromised intellectually. Now his earnest manner is matched by pinpoint assessments of people; he knows what Brandon and Sloane need from each other even if they can't see it themselves.

Katerina is a house-call hooker whom Brandon engages for Doug. Fresh from the Ukraine, she has mastered walking in skyscraper heels but not speaking English. That doesn't tie her tongue — Katerina makes no effort to conceal her thoughts, and her chutzpah makes it seem likely she'll succeed in her pursuit of a green-card marriage or a rich man from "the Goldman Sachs." She may have her schemes, but she's nurturing; she brings Doug soothing soup, complete with firm instructions on topping it with sour cream.

Mad Love's subject matter has a sexual dimension, but Smith's humor is more witty than bawdy. Her characters are realistic, and the plot twists include quirky but essentially plausible oddities, such as a money problem that might be solved by a rare baseball card.

The real challenge for each character is growing up. How much cynicism do you need to be an adult? How much naïveté can you retain? Doug's brain trauma freezes him in a certain youthful innocence, while Brandon's laissez-faire attitude toward sex is a guilt-free college kid's endless summer. Katerina was tricked into immigration and sex work, yet she maintains a sunny disposition as charming as it is unlikely. And if these three seem to need a dose of hard-nosed realism, Sloane is awash in maternal and career calculations that are not making her happy.

For all the characters, the trick seems to be keeping enough optimism in the tank for the long journey of life.

Smith constructs the story with barely a puff of traditional exposition. She dives right into scenes, starting them just before they reach an emotional peak, and resolves each with a flourish that keeps viewers curious about what's next, even as the moment crests to provoke laughter.

Maggie Burrows directs with sharp instincts for the rhythm necessary to make verbal comedy soar. The script's humor requires realism, and Burrows gets the details of space and movement just right. She keeps the all-professional cast working in high-energy harmony, the better to focus audience attention and to wring a laugh from the smallest gesture or the biggest comic reaction.

Alex Trow plays Sloane in a career-conscious hurry but never lets the character grow brittle from her single-minded striving. Trow suggests the chinks in Sloane's armor with secret little moments of self-doubt — a pause, a gulp, a loss for words — that make the portrayal funny and warm.

From his sparking eyes to his relaxed manner, Thom Miller presents Brandon as charm personified. The actor makes Brandon easy to root for even when he tussles with his brother or shuts down Sloane. Miller and Trow have wonderful comic rapport, and they prove capable of depth when the story requires it.

As Doug, Daniel Patrick Smith is a sweet bundle of goofiness. His performance looks effortless, but it's sturdily constructed from concentration on his fellow actors and sharp comic craft.

In a rich cameo, Laurel Casillo astutely finds the middle ground that makes Katerina both fascinating and funny. She doesn't ham it up, but neither does she deprive us of the character's wacky intensity.

The production values at Northern Stage are impressive. Costumes by Allison Crutchfield neatly demarcate the characters' styles and classes, and the well-appointed set by David L. Arsenault cleverly morphs into multiple settings.

The play flies by without intermission. The scenes are brisk, as Smith economically establishes her characters. By the end, when real feelings emerge, Miller and Trow show us the courage love takes. They may stop playing it safe, but they don't stop being playful.

The original print version of this article was headlined "Love, Actually"