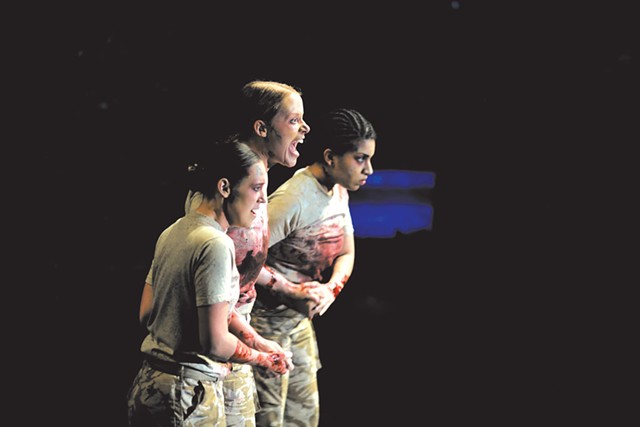 Disorientation may be the ideal way to liberate an audience. In his bold vision of Macbeth, director Stephen Brown-Fried uses surprise to help viewers see the play anew. Northern Stage's production is not merely a modern-dress spin on a classic but a novel way to experience its emotional depth.

Shakespeare's story of a man shedding his morality in a quest for power is a complete psychological portrait that can be set in almost any context. Brown-Fried selects a dystopian future in a world at war, and he succeeds in turning abstract need into visceral hunger. Spurred by his own ambition and his wife's determination and deluded by a sense of invulnerability, Macbeth murders those who stand between him and Scotland's throne.

Brown-Fried's surprises are enlightening parallels that give Shakespeare's images fresh power. The three witches first appear as combat casualties, then as hollow-eyed battlefield medics. Banquo's military training sustains him as a ghost who still firmly squares his turns as he marches. Macbeth and his wife conspire in a kitchen of soulless stainless steel in which the only wall decoration is a security video.

In Shakespeare's text it is hallucination, not magic, that propels Macbeth. Brown-Fried amplifies this idea. "Double, double toil and trouble" becomes a meth-cooking recipe, and Macbeth's crazed desire to see the future is best realized by shooting up. In a play of unsatisfied appetite, the addict is king.

The production is dark, literally and figuratively. White theatrical lighting is unsoftened by tinting gels. A bank of fluorescent fixtures creates a hospital room; portable worklights illuminate battles; candles flicker at a dinner table and in a dark hallway. Finally, the only lights are the flashlight beams mounted on gun barrels. The darkness is complete.

But the production is so alive with emotion that these somber tones only enhance the intensity of the characters' needs. Macbeth and Lady Macbeth begin conjuring happiness as they envision political success. Violence is a means to an end. Their scenes together have a charge of sex and power, and when they touch, theirs is not a delicate caress but the firm grip of brutal resolve.

Scenic designer Bill Clarke creates a disturbing, fascinating world. Packing crates, TV sets and an industrial fan stand in disorder on top of rocky rubble strewn around the stage. The audience sees the theater's backstage doors and wire-covered utility lights. The TVs on the ground are joined by a turret of televisions, strapped together, that rises to the ceiling, ready to beam out picture and sound.

Littering the stage with TVs might sound like old performance-art news, until you see what video designer Alek Deva and lighting and projections designer Dan Kotlowitz have done with them. The video images aren't simplistic commentary on the action but integral to it. A soap opera replaces Shakespeare's porter scene. A scandal concerning the first Thane of Cawdor unfolds on the TV news, and the resolution of the witches' prophecy takes us back to the days when the Vietnam War appeared in America's living rooms each evening.

The use of video isn't overdone. This production masterfully combines blank screens, abstract patterns and recognizable TV idioms to push Macbeth's story into multiple dimensions. The wash of pixels that occasionally flickers over the entire set becomes both scene transition and, it seems, a chance for the characters to clear their heads and wake up from a nightmare.

The battle scenes work on a contemporary audience with the power that Shakespeare presumably sought to achieve 400 years ago. But our experience of violence has changed in those centuries. Today, we're at once overfamiliar and under-experienced; for most of us, knowledge comes from screens rather than life. Brown-Fried's theater production has the power to unsettle us as movies can't, with sound that shakes the room and light from its source, not from pixels.

The performances suit Brown-Fried's daring vision by contrasting almost ofhand realism in physicality — pausing for a smoke, kicking off shoes — with the emotional intensity of the language. Superimposing day-to-day gestures on characters in turmoil summons up the banality of evil. And this easy naturalism invites the recognition that we share Macbeth's psychological contours: No matter how repellent, he is emotionally and morally comprehensible.

Robert David Grant portrays Macbeth's eventual madness effectively but sheds less light on his internal journey there. With excellent vocal skill, Grant gives the speeches nice rhythms, yet he rushes past Macbeth's doubts before they register.

Hollis McCarthy as Rosse and Bradley Anderson as Lennox convey Shakespeare's subtle sarcasm as lords watching Macbeth's rise to power. As Macduff, Avery Glymph reveals the character's dignity as he suffers both physical and spiritual wounds. Kim Fischer's Malcolm shrewdly tests those around him.

Rigel Harris, Carene Rose Mekertichyan and Virginia Ogden are mesmerizing as the three witches. They interact powerfully as a group with its own code and secrets, and radiate cunning and mystery.

Moria Sine Clinton's costumes are arresting. Military camouflage depersonalizes Macbeth as a soldier, and his business suit is yet another uniform of control. Giving the lords flak jackets over their suits conveys a state of unending war.

Macbeth's pursuit of power repels but also attracts. One of the most appealing contemporary narratives is single-minded drive toward a goal. We might venerate a TV character with such zeal or imagine ourselves in his or her place. Shakespeare and Brown-Fried turn up the volume on that channel a little and show what happens next.