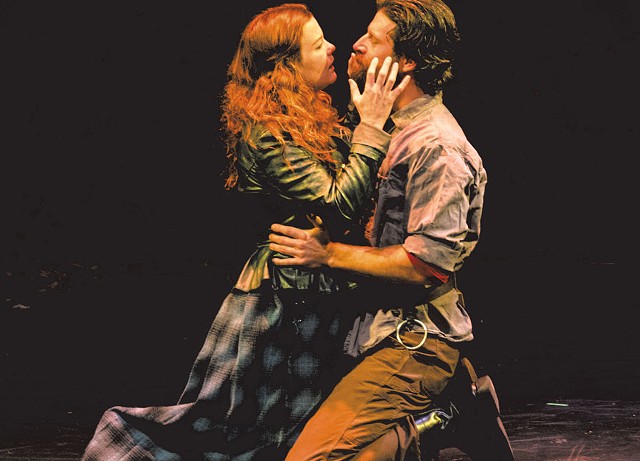 Shakespeare created 25 characters to populate Macbeth, but it's the story of two people. As Macbeth discovers his capacity to cast off scruples to seize Scotland's crown, and Lady Macbeth craves greater power for her husband, both characters become windows into the human struggle between desire and conscience.

In the Middlebury Actors Workshop's production, the violence Macbeth employs is ugly but never as disturbing as his own moral bankruptcy.

Macbeth can be reduced to a few of its parts and still offer the audience real riches in the form of two of Shakespeare's most fascinating characters. Director Melissa Lourie approaches the play like a contemporary psychological portrait and focuses her production on Macbeth's mental journey from valiant soldier to paranoid monarch. Supporting characters and the outward conflicts of the plot receive less attention here than do the internal struggles of the couple at the heart of the play.

The result is two impressive individual performances nestled within a less-than-satisfying overall production. Craig Maravich's portrayal of Macbeth's voracious quest for power is built with nuance, and Chris Caswell's vision of Lady Macbeth fuses weakness and strength in a riveting display. But Lourie doesn't investigate the drama beyond the core characters, and the final effect is a lack of coherence, with no connection between the psychology explored in some scenes and the external events occurring in others. It plays as if Shakespeare's story were interrupting a personal dilemma rather than triggering it.

The range of acting skills displayed by this large cast defeats a singular vision. Some actors substitute emphatic delivery for emotion and can only empty out the words. Such limitations are forgivable in a cast of 20, and a community production of a worthy play is as much an experience for the actors as the audience. Still, this thoughtful presentation delivers the play's mood and events.

After proving his courage on the battlefield, Macbeth encounters three witches who tantalize him with a prophecy that he'll become king, a possibility equally alluring to Lady Macbeth. Now that he believes he's seen the future, he cannot wait for it to unfold and begins to make it happen. With his wife urging him on, Macbeth murders King Duncan and takes the throne after Duncan's heirs flee.

But gaining the crown doesn't produce the happiness he and Lady Macbeth imagined. Now they're locked in a struggle to hold on to power against enemies real or imagined. Lady Macbeth can't endure her guilt, and Macbeth succumbs to paranoia laced with a crazed belief in his invulnerability. In the end, his fearlessness is a type of psychosis and his ambition, mere brutality.

Lourie seeks to showcase the psychological underpinnings of Macbeth's willingness to steer himself by his yearnings, not his conscience. Lady Macbeth has an equally complex journey, and what's especially poignant about this production is the way it shows the couple becoming stronger by plotting together — only to lose each other as the tide of violence sweeps away their marriage.

Lourie's blocking has mixed success. It's a brilliant choice to have the army attacking Macbeth's castle face the audience to speak, then execute a forceful military turn upstage — thereby flipping the audience's point of view, so we now confront the besieged Macbeth. On other occasions, however, Lourie moves large groups unimaginatively, spacing people in dull lines and missing opportunities for movement to do the storytelling.

The director stages the soliloquies as direct addresses to the audience, not as internal musings we witness. It's an approach that stops time, suggesting that the thought processes behind the speeches are over. When the actor isn't caught in the act of discovering what to do next, the speeches feel like decisions announced, not thoughts overheard.

Despite the false intimacy of acknowledging the audience, Maravich handles his soliloquies marvelously, especially the "tomorrow and tomorrow" speech. This is usually performed as an elevated wail of despair, but Maravich gets to the molten core of it: The sorrow lies in being too numb to feel sorrow. Throughout the production, he conveys the energy of a warrior who cannot quiet his own imagination, and cannot trust it.

Caswell polishes every facet of a complex Lady Macbeth. She roots the role in youth, making the character both impulsive and fearful, letting nervous gestures convey the recklessness of immaturity. When Lady Macbeth summons courage in the "unsex me now" speech, Caswell makes her tremulous, uncertain she can actually do what she intends.

And when guilt overwhelms her, it takes the concrete form of compulsive hand washing, a gesture that Caswell rescues from becoming a simplistic outward symbol and turns instead into an agony. This Lady Macbeth regresses to infantile raving, but Caswell takes her there in a frightening downward spiral of losing and regaining her composure.

The set is simple but powerful. Scenic and lighting designer Matthew Stone fills the back of the stage with a small, stunted forest. The dry leaves seem to quiver as eerie red and blue light plays across them, and fog rises when the witches are afoot. Suspended above the stage is a vast circle spiked with lights. The audience's first vision, then, is of a crown hovering above a natural world in decay. It's a magnificent conception and execution.

Costumes, designed by Angela Brande, are a jumble. Trying to keep the period ambiguous shouldn't lead to cargo pants, and trying to honor traditional Scottish dress shouldn't result in work shirts over shin-length skirts that are more blankets than kilts. In every instance, the costumes detract from characterization.

The fight scenes are well choreographed by Paul Ugalde, especially the climactic one that pits Macbeth against Macduff in a duel to the death. The sequence fully conveys the strength and daring needed in a sword fight. Indeed, all the violence in the play is given an ugly inhumaneness, with throats slit by swift and callous gestures that steep the story in cruelty.

The production never embodies a complete world formed by Macbeth's words and deeds. It remains a set of scenes, many of them wonderfully rendered; missing is the solidity of a single vision. But Lourie has guided Maravich and Caswell to explore the depths of their characters, and these two actors never let the words do all the work. Shakespeare's brilliant language holds the ideas; Caswell and Maravich convey their effects on the soul.

The original print version of this article was headlined "Power Couple"