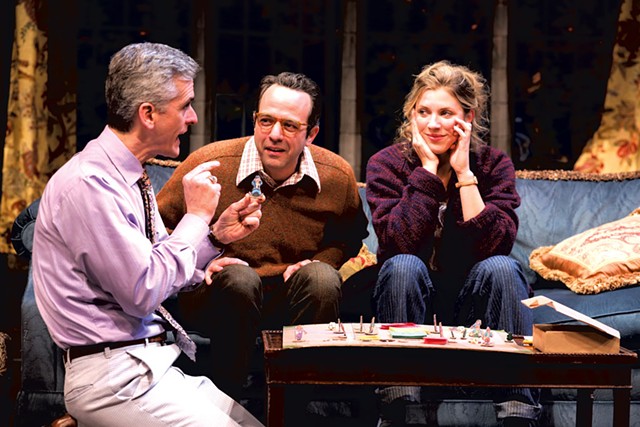 The firmly British characters take disappointment hard in Living Together, one third of Alan Ayckbourn's clever room-by-room trilogy, The Norman Conquests. All three plays are set over a single weekend in July, each occurring in a different location around the same country house. The characters move, but the audience doesn't — we're left to imagine what's happening offstage, taking our cues from snippets of exposition and the characters' changing moods on each entrance.

Ayckbourn's dovetail joinery makes each play stand on its own, but the full composition is even more satisfying.

Three of Vermont's professional theaters have joined forces to produce the complete trilogy this year. Northern Stage leads off, running Living Together through May 8 in its new Barrette Center for the Arts in White River Junction. The torch then passes to the Dorset Theatre Festival, which will stage Table Manners from June 16 to July 2. Weston Playhouse will offer the final play, Round and Round the Garden, July 21 to 30. The same six actors appear in all the shows, but each theater uses a different director.

The highly regarded 1973 trilogy celebrates a free spirit who counts on love to make everyone happier. Living Together begins with the titular Norman rapturously pouting. He's come to pick up his sister-in-law for a secret holiday tryst, but now the deal is off. Instead, he'll be stuck for the weekend with her and four others at the country house where she cares for her invalid mother.

Norman is a flirt but not really a cad. Seduction is his default condition, but his romantic conquests seem less like expressions of lust than the work of a philanthropist offering the only currency he has. "I must be magnetic," he tells his wife, Ruth.

Yet this slight, scruffy-bearded librarian is hardly debonair. He becomes a ladies' man by dint of will and with a conviction that all women crave a little romantic attention.

The people around Norman surely need some cheering up. His sister-in-law, Sarah, tut-tuts with tedious moral rectitude, boasting of her perfect family while moaning about all they require of her. Sarah's husband, Reg, is a British blockhead in the clueless John Cleese tradition, refining amiability to the vanishing point. Reg's sister, Ruth, is grimly consumed by her career.

Reg and Ruth's other sibling, Annie, still lives at home and cares for their mother, reluctant to make the high dive into life and love. The local vet, Tom, would be a fine match for Annie if only he noticed her as keenly as he stares at the cat stuck up a tree in the garden.

These characters hoard each disappointment in a private scrapbook of frustrations. When Norman stirs things up by flirting with all three women over the weekend, he unleashes a tornado of jealousy and insults. Once they start to scuffle, glare and screech at each other, their miseries are at last a reason for action instead of brooding.

Director Peter Hackett smoothly stages all of this. At last Friday's preview performance, the production earned as many laughs from Hackett's physical gags as from Ayckbourn's drily witty lines.

Richard Gallagher conveys all of Norman's charm and manages to make immaturity positively enchanting. His drunken dance from floor to sofa is a triumph of unself-conscious wiggling, while his puppy-dog looks would melt glaciers. Gallagher gives the show a warm, beating heart.

As Sarah, Caitlin Clouthier has the comic timing to make each crack in this ice princess' composure hilarious. In comedy, taking control away from a control freak might be the English national pastime, and this Sarah suffers grandly. Clouthier gives her a piercing glare, then lets her gaze melt under Norman's attention.

David Mason amplifies Tom's haplessness, creating a fool. The portrayal gets lots of laughs, but of the easiest kind. With each long, indecisive "umm," the actor earned a titter, but a Tom this incompetent is more caricature than character.

Jenni Putney's mobile expressions and earnest shrugs make Annie easy to root for, even as the character keeps floating between half-hearted flirtations with Norman and Tom. Putney makes Annie's fear of commitment so matter-of-fact that her jealousy is a thrilling explosion.

Mark Light-Orr gives Reg a dotty bonhomie that's both cringe-worthy and adorable. Light-Orr is such a keen listener onstage that he helps focus a scene simply by the attention he pays to his fellow actors. By giving Reg a secret struggle to remain composed, Light-Orr nails him.

Stuart Duke's lighting captures the passage of time while bringing out all the fine points of the set and evoking the changing light through the window. Charles Schoonmaker's costumes showcase everything we miss — and all we might regret — about 1970s fashion.

It's rare for any theater to stage all three of these plays in a single season, so this opportunity to see the entire trilogy is worth seizing. Because different directors are involved, we may see slight changes in characterizations or style, but the six actors are the crucial constant in this experiment.

Northern Stage's production makes the play as fresh and fun as it was in the '70s. Clothing styles and attitudes about sex may have changed, but Ayckbourn's foolish characters endure.