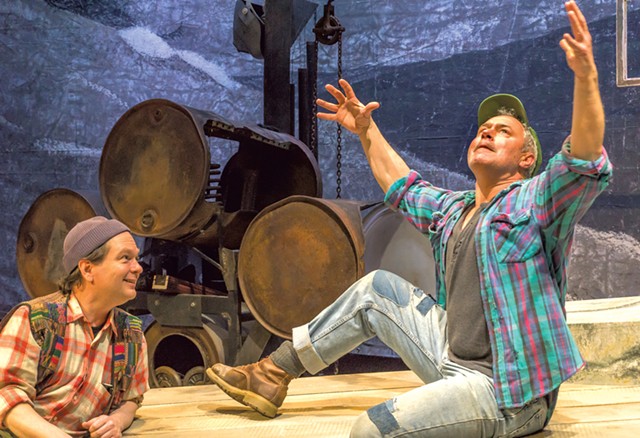 David Budbill's Judevine is drama with the harmony of a choral work; poetry built of clothing, posture and accent; spectacle found in the jumble of a junk shop's wares; tragedy bolted to poverty and comedy born of haplessness. It's swearing, bitching and moaning, some of it aimed right at its Vermont setting. It's the humor of petty gossip and a dozen daily battles against insensitivity that finally allow compassion to drive itself up like spring's first crocus.

Lost Nation Theater starts its 40th season by revisiting a play it last produced in 2007. Some of the actors in this production have been performing Budbill's work for 25 years. Director Kim Allen Bent calls it a labor of love, made poignant by the poet-playwright's death last September. Budbill's fictional characters were inspired by the rural Vermonters he met while living in the Northeast Kingdom, brought to life with plainspoken clarity.

The play is a montage of monologues and small scenes as six actors portray about two dozen characters living in the fictional Vermont town of Judevine. A seventh actor plays David, the author himself, who moves into town with a notebook in his breast pocket and boots suited for working alongside local loggers.

Many events are described, not enacted, but the emotional energy comes to life in the telling and in movement that serves as a stylized echo of the action. David takes turns narrating with the entire ensemble, while some scenes play out in full dialogue and action.

Antoine, a French Canadian backwoodsman, opens the play with a caterwaul. "Shit-a-goddamn" is only the first of his baroque curses, and his complaint but one of dozens aimed at the forces arrayed against the folks in this small town wedged in the mountains. But, as cold, poor and witless as they are, Budbill never lets their humanity sink out of sight.

Bent directs with an eye for clear, focused movement across the set's dynamically angled platforms. He uses stillness to center each story on a few telling physical details, such as the expression of a contented couple, the parting glance of a woman who's reduced to looking for housecleaning work, the crouch of a deer hunter.

Lost Nation demonstrates all its theatrical strengths and its interest in Vermont stories. Ben Ash, Robert Nuner, Abby Paige, Scott Renzoni and Mark Roberts all return to roles they've inhabited in prior versions of Judevine. Newcomers Sean Gregory and Ashley Nease meld with the veterans to create a strong ensemble, most of whom portray multiple characters.

Nuner's acting shows the difference between being a character and performing some traits. As Arnie the logger and the work-averse Conrad, Nuner disappears into his characters much as Budbill himself lets the simplest descriptions bring real people to life. Nuner's portrayal of Raymond, alongside Abby Paige's Ann, truly glitters. Raymond and Ann have grown old loving their farm and each other. Nuner glows with a bright little fire of contentment that sees him through loss with grace.

Roberts sinks deeply into his all-heart characters. With a solid sense of justice, Jerry runs the combination gas station, store and restaurant. Doug finds physical joy in roller-skating. And Roy, the welder, has an ecclesiastical power to save anything made of metal, finishing a job with the benediction, "That oughta hold it."

Paige chisels out the details of her characters, like the delusional Lucy's earnest passion. As Alice, the proprietor of a secondhand store, Paige raises an eyebrow and tugs on her vest to show the character's firm command of her chaotic store. For Ann, Paige lays bare the depth of the character with facial expression alone. She makes each character memorable, even the tourist skier who glides by with vacuous pleasure.

Ash gives Antoine a devilish mix of crab-like hops and expansive gestures. He exaggerates just short of cartoonishness, and it suits the exuberant Antoine. When Antoine realizes he is, after all, an "aklaholic," he runs through a gamut of emotions before settling on what proves the making of him. Ash also portrays Guy DesJardins with rubber-jawed glee and a knack for imitating the sound of engines in sickness and in health.

The stories are only vignettes, but if they don't go deep, they always go somewhere. We follow Tommy (a quiet, steely Gregory), the Vietnam vet who hunts with a scary fervor after the war as he succeeds and fails at adjusting. We learn to cluck at the tricks the Hopper family pulls, to root for Antoine to get his "wommens" back, to hope that poverty will spare Grace (the versatile Nease) from complete despair.

Cora Fauser's costumes root the production in authenticity. These are the true buffalo plaids, rubbed-thin flannels and last-legs jeans. Lighting by John Devlin is a delicate counterpoint in each scene, setting the mood but never overwhelming the action. And when Devlin closes a scene by invoking the sun or sky, there's a hint of how the natural world itself inspired Budbill.

Donna Stafford's set design supplies a sense of movement and change, with a cascade of platforms whose angles have a beautiful visual balance. Plank decking stripes some with diagonal lines, while granite veins mark the others. For a backdrop, Stafford painted three immense images of mountains near Bent's youthful haunt in Braintree.

Budbill periodically calls for the actors to mimic the sounds of birds, animals or wind. The effect truly makes the theater vanish as a sense of the outdoors arises, with sounds coming from different distances and directions. As a bird calls and a tree rustles, the faint noises summon up the experience of being in the woods, surrounded by the limitless and the trivial. That's what Budbill's story celebrates in people, and in place.