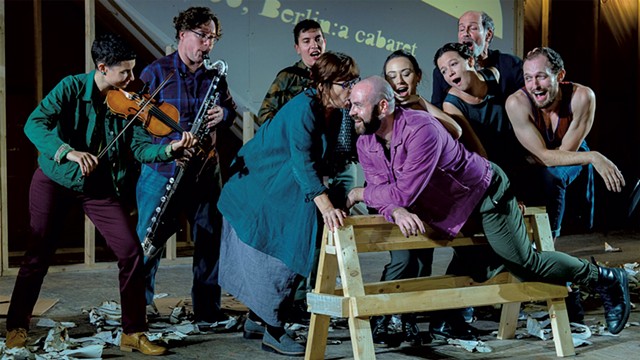 When it surprises, theater gives us fresh eyes. When it repeats patterns, theater nudges us to make connections. The Weston Playhouse production of Paula Vogel's Indecent is stuffed with surprises in its inventive staging, and it makes the most of a script that sneaks up on viewers by repeating elements until they snap into sharp focus. This production is moving when we least expect it to be, and physically fervent from start to finish.

It's a play about the urgency of staging a play. On a rough-and-tumble set that looks like a construction site, seven actors take on not only the roles in a Yiddish play called The God of Vengeance but also all the ones necessary to dramatize the staging of that play over the first half of the 20th century. Based on a true story, Vogel's 2015 script ripples outward from that little Jewish play to touch on nativism, assimilation, immigration, homosexuality, censorship, oppression and religious intolerance.

Indecent starts with a rough, authoritative gesture: An actor writes the play's title across a 4-by-8-foot sheet of wood, scouring the surface with bold pencil marks. The play is summoned to life by being named, and the substance used to tell it will be any scrap materials the troupe can scrounge. The actor finishes writing and speaks to the audience, assuming the role of narrator. He's come to explain why a play changed his life.

Sholem Asch's 1907 play The God of Vengeance tells the story of a brothel owner who repudiates his daughter when she falls in love with one of his whores. The passionate lesbian relationship is expressed as exalted fulfillment, and both women revel in their attraction without shame. Vogel dramatizes the play's productions and follows Asch's life. He not only strives to make homosexual love beautiful, he also wants to tell Jewish stories, in Yiddish, to give his people a sense of identity.

The literary circle in Asch's native Warsaw condemns the play for its treatment of both sex and Jewish character, so the playwright heads to avant-garde Berlin. Here the play is embraced as a foundation of Yiddish theater, and various actors tour with it throughout Europe. In 1920, Asch immigrates to New York City, and the play is widely performed in small Lower East Side theaters.

In 1923, a producer wants to bring the popular play uptown to Broadway, but demands changes for a mainstream audience. The cast struggles to master pronunciation of the English translation. The main scene of lesbian tenderness is cut. But a kiss between two women is not, and the New York police shut the show down as indecent.

The actors render time, place and mood with stunning economy. tweet this

As a play, The God of Vengeance sounds melodramatic when quoted, in keeping with the heavy-handed theater of the time. Its merits are cultural, not artistic. Vogel is wise not to enact too much of Asch's play, leaving its value in the eyes of the actors beholding it onstage. The theater troupe finds purpose in the play, and their commitment can excite the audience, but if a viewer decides to find the play within the play worth scorning, the whole premise is shattered.

Director Jordan Fein stages the show so viewers won't be tempted to mock Asch's play. The immediacy of the performances is echoed by the use of the homeliest of props, chief among them an overhead projector that's wheeled around the stage, extension cord trailing behind. Actors take turns using the clunky old projector to flash up captions framing the scenes, and its fierce white light is part of the ambience.

A three-person klezmer band accompanies all the action. The violinist (Zoë Aqua) is elbow to bowing-elbow with the actors; the accordion player and music director (Ira Khonen Temple) drives the life-affirming music at the edges of scenes; and the clarinetist (Jason Gresl) matches the bright and melancholy klezmer tunes he plays with expressions of tenderness for the actors among whom he strolls.

Scenic designer Kimie Nishikawa and lighting designer Oona Curley make the stage look bare-bones but have subtly created a space with power of its own. Stud walls and a sloped ceiling of joists resemble a house under construction, suggesting both a theater's backstage and a perpetually unfinished artwork. To show the need to create, the stage becomes a blank page.

The acting style is simple and plainspoken, with the directness of a documentary. Actors take on multiple roles, but the characters are often briskly stated iconic representations, not slow-to-bloom psychological portraits. Indecent's storytelling doesn't have time for that. Staged with stylized furnishings, such as sawhorses and planks standing in for a table, the show relies on actors to convey the physical reality.

In the style of Bertolt Brecht, a projection states: 1906, Warsaw: Madje Asch reads The God of Vengeance in bed with Sholem Asch. Bock, playing Asch, leans languidly on the edge of a table, turning on his elbows like a man in bed. Carden, as Madje, sits on a board, wiggling against his impatience as she finishes reading. Here and in dozens of quick episodes, the actors render time, place and mood with stunning economy.

Theatrical realism is cast aside in favor of symbolic artifice: Pulling up a shawl turns an actor into a new character. All the performers are adept at finishing a scene with a pause or gesture that solidifies each fleeting moment the play depicts.

The actors maintain a poised formality for much of the play. A sense of ritual remembering impels them. By the play's dramatic end, viewers are holding a piece of those memories after watching one group of artists transformed by one play. Like a proof of theater's transcendent power, Vogel's play affirms the necessity of art.