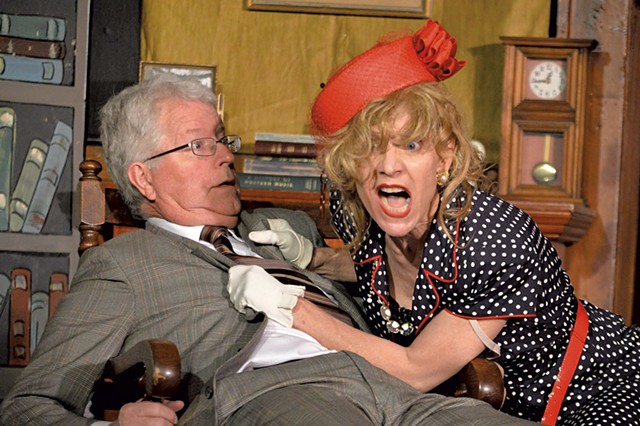 An invisible rabbit helps everyone in Harvey see the value of human kindness, and a community theater gives audiences and actors a way to celebrate it. Goodness isn't hidden in Mary Chase's Pulitzer Prize-winning comedy, but most everyone in the cast of characters has better things to do than stop to care about others, as the oddball Elwood P. Dowd is inclined to do. Elwood slows down; they hurry up. The 1944 play sketches bygone social norms but ever-present human flaws.

For their 40th season, the Valley Players are reviving six of the 119 shows they've staged during their long tenure in the Mad River Valley. In 1979, the group selected the heartwarming Harvey as its very first play, performing it in the Fayston Elementary School gym. The company secured the Odd Fellows Hall in Waitsfield for its second production and has presented plays and musicals in the circa-1830s brick building ever since.

Harvey uses a little bit of magic to highlight eternal human qualities. The play is filled with sweet lessons the guileless Elwood can teach folks who are so caught up in themselves that they miss the point of living. The year is 1944, when dropping by the tavern was sociable and locking someone up in a nuthouse was a way of saying he didn't fit in. Though no weighty tract, the play is ultimately about an individual resisting conformity and touching people enough to bring out the goodness inside them.

Elwood (Doug Bergstein) is an amiable, middle-aged tippler with the pleasant eccentricity of actually listening to other people. He's generous, warmhearted and honest. What gets him into trouble is his best friend. That would be Harvey, a 6-foot-3-inch-tall white rabbit who's invisible to the audience and nearly everyone onstage.

To Elwood's social-climbing sister, Veta (Rachel Natvig), the rabbit is an embarrassment and a hindrance to her efforts to advance the marriage prospects of her daughter, Myrtle Mae (Ann Naumann). The wealthy family has tried to keep Harvey a secret, but Elwood is keen to introduce his best friend to strangers.

After Elwood commits one rabbit gaffe too many at one of Veta's parties, she decides to place her brother in a mental institution. Founded by Dr. Chumley (Jack Bradt), the sanatorium is now largely in the hands of young Dr. Sanderson (Wes Olds). Sanderson is keen on proving himself — unless it interferes with flirting with nurse Ruth Kelly (Mikki Nucci).

When Veta attempts to have Elwood locked away, Chase turns the tables, to high comic effect. Snap judgments about mental fitness — particularly when stuffed shirts tag quirky people as crazy — give the playwright a way of showing what society really values. This vastly oversimplified version of psychiatry has been mined for comedy in dozens of stories, from this play to the 1962 book and 1975 film One Flew Over the Cuckoo's Nest. Involuntary commitment was once a fun plot device, and Chase's script runs with it.

Harvey is perhaps best known as a 1950 film, starring Jimmy Stewart as Elwood. He was the fourth actor to take on the role in the play's three-year Broadway run. The play has been revived many times, most recently in a 2012 Broadway staging with Jim Parsons in the main role.

The Valley Players rounded up some excellent costumes that take the viewer straight back to the 1940s. Veta's wardrobe is positively showstopping, and all the women get impressive hats and accessories, including a few vintage fur pieces that suit the period. The sanatorium personnel glow in sterile, pure white. In a dull gray sport coat and gray trousers, Elwood doesn't get a costume to match his magnetic charm, which seems like a missed opportunity.

The set design by Nucci splits the proscenium stage right down the middle, creating the well-appointed Dowd living room on one side and the antiseptic Chumley Rest Home on the other. Only lighting separates the spaces. The level of detail in furnishings is admirable, the finest among them a painting by local artist Dotty Kyle that captures the friendship between Elwood and Harvey.

Director Tom Badowski blocks the action with the stiff formality that a small proscenium stage often engenders. But he lets the actors loose for the play's more physically outlandish moments, and those perk up proceedings and give the actors opportunities to ham it up a bit.

As a community theater effort, the show works on most levels, but untrained performers lack certain craft skills. Chief of these is maintaining a crisp pace to support the script's intricate language and slow-building humor. Oddly enough, they could speed up in order to slow down, using pauses long enough to convey thoughts and reactions. Chase's story is about Elwood's ability to take the time to listen to others, and it's good guidance for acting as well as daily life.

Community theater actors shouldn't be judged by the same standards as professionals. Don't head to this show expecting the polish and dazzle of acting companies like Northern Stage or Weston Playhouse. The Valley Players are performing for friends and neighbors, and merit neighborly respect.

In other words, viewers are in for some overacting and bad choices in accents and vocal mannerisms. But they're also in for a chance to see live theater created by a group that's been entertaining Waitsfield and neighboring towns for 40 years. And there are plenty of well-played comic moments, especially Natvig's wide-eyed, wild-limbed version of Veta's collapse.

Community theater is a labor of love, and the current group extending the Valley Players' legacy demonstrate what a company can bring to a local audience. In Harvey, the performers all convey real delight and warmth in making a play together.

The original print version of this article was headlined "Hare and Now | Theater review: Harvey, the Valley Players"