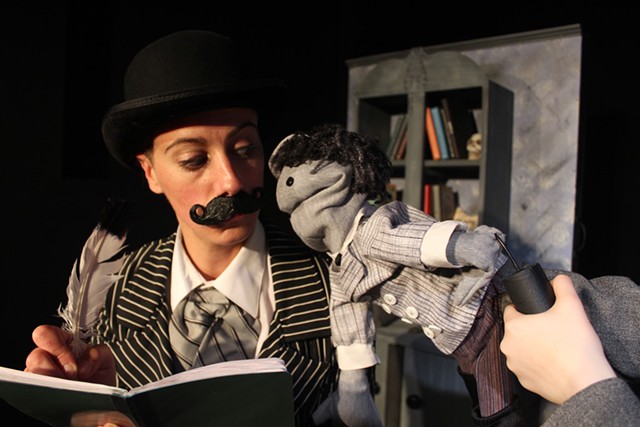 Like Halloween's safe little glimmer of menace, Edward Gorey's stories provide an ironic perch from which to peer at the creepy, decadent and dark. Stephen Currens adapted Gorey's work for the stage, and Burlington's Saints and Poets Production Company has added puppets to the cabaret-style musical. The result is a quirky entertainment that captures Gorey's sinister whimsy. Gorey Stories is now playing at the Off Center for the Dramatic Arts.

Bringing Gorey to the stage begins with the premise that his stories, and not his hauntingly composed triumphs of crosshatched illustration, are the attraction. His surrealistic fables make offhand mention of perilous circumstances, spiked with nutty details that never explain anything yet always command attention.

Currens collects 18 stories with minor abridgment and adds charming mock-opera musical accents by David Aldrich. The biggest license Currens takes is reeling off six of the stories within the frame of a seventh, allowing the oddball novelist who appears in one story to struggle with "writing" the others. Currens' largely faithful treatment of the text is entertaining, but there's a reason this adaptation closed quickly on Broadway: Translating Gorey to the stage adds little and leaves out a lot.

But the inventive Saints and Poets have found a vigorous way to enliven the adaptation. Kevin Christopher has directed and designed the show to incorporate puppets, ending with an animated sequence using Gorey's artwork. Eight actors form a delightfully impassive ensemble, narrating or enacting the weird tales with the same unsettling composure that the illustrations imply.

Gorey's deadpan depictions sit at the edge of horror, framed to leave the corpse or the murderer just out of view. Christopher stages "The Willowdale Handcar" to create a similar effect. For no particular reason, three people take a trip on a handcar along a railway, passing various hideous disasters described by an expressionless narrator. A cast member trails by with little signs that reproduce Gorey's original illustrations, making the distant miseries appear like glimpses on a journey.

At first, the narrative thread in the handcar story may tantalize the viewer to expect an ending that brings the odd images into coherence. Gorey's humor depends on crushing such dreams and mocking conventional storytelling. Because his style evokes the sentimental narratives of the 19th century but generally ends stories in ambiguity, the joke is the juxtaposition of the overwrought with the under-delivered.

The ensemble includes several strong singers, and the group as a whole produces heavenly harmonies. Musical director Nate Venet plays keyboards and finds all the romantic humor in Aldrich's score.

Since Gorey's stories contain little dialogue, the stage presentation is generally structured with a narrator and several actors enacting events, with or without puppets. Much in Gorey's style, these enactments are often confined to single, emblematic gestures or references to offstage action. The set includes a rotating Victorian wall, projection screen, and reproductions of a Gorey urn and settee.

The staging often turns on the half-hidden. The unseen reaches a peak in "The Curious Sofa," an emotionless narrative of wild debauchery, recited without expression and enacted for the imagination. The actors dart behind walls and reveal only their suggestively frolicsome arms and legs.

Gorey's visual tone is detached, and what happens to his characters may be macabre but is always viewed from a dispassionate distance. This production makes reckless disregard for misery a central feature. The eight performers aim everything directly at the audience, and the artificiality of theater coats every gesture.

Cael Barkman pastes on a spectacular mustache to portray a suffering novelist and magnifies all her characters' emotions with bold recoils of surprise or lunges of frustration. Kaitie Bessette's roles include children able to annihilate others with weapons-grade side-eye. Andriana Chobot is especially good playing doomed eagerness, and Patricia Julien inhabits her flapper costume with airy enjoyment of cigarette holder and upper-class disdain.

Karlie Kauffeld narrates several pieces and lets a sweater and calm voice conjure Mister Rogers even as her text catalogs menace after menace. Stella Pappas is brilliant at leaving her own expression locked in innocence while her puppet characters commit heinous acts. Erika Polner's bright eyes and boater hat show she's at home in society and perfectly oblivious to peril. Syndi Zook, whose singing voice is divine, sneaks menace into her roles as trustworthy grandmothers and imposing matriarchs.

The puppets, designed by Chris Caswell, Meghan Dewald and Christopher, include a nattily attired hand puppet couple, plus shadow puppets that put Gorey's recognizable art on a projection screen in silhouette. In "The Doubtful Guest," two people operate a beaked creature that arrives at a grand mansion and engages in odd behaviors. One puppeteer's gloved hands serve as feet and keep the creature prancing on long, hinged limbs; the other steers the birdlike body into unsettling encounters with members of the household.

An animated sequence by Jess Wilson, Alec Julien and Lori Roberts renders Gorey's "The Gashlycrumb Tinies" as GIF-like movies built from the original illustrations. It's a rhyming alphabet that initially seems as soothing as Mother Goose, but every letter stands for a child who died an absurdly dreadful death.

Costume designer Catherine Alston works with a palette of grays and blacks to summon Gorey's pen and ink. Like Gorey, Alston spans Edwardian and 1920s styles and lets dress become the extent of personality.

Gorey's humor combines meticulous drawings of vacant Victorians, text that juggles archaic vocabulary and unseen terror, and a graphic presentation that maroons the characters in vaguely hostile spaces. This show's puppets, costumes and set pieces channel his visual style, while the ensemble renders his accounts of misery, eroticism and brutality with the weirdly unflappable tranquility of his stories. The play grants permission to laugh at horror and to see how easily the ominous can pierce the veneer of normalcy.

The original print version of this article was headlined "Frightfully Fun"