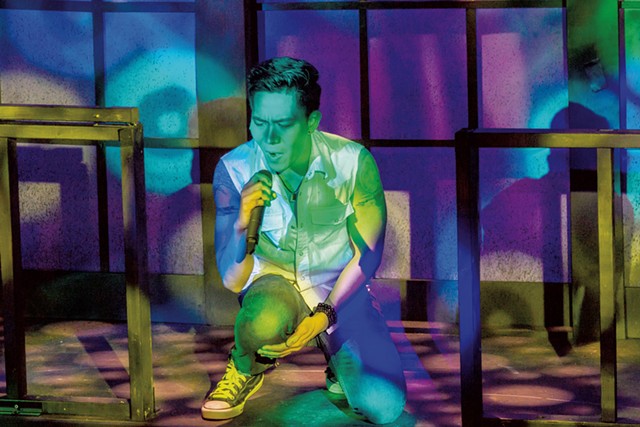 Musical comedy operates somewhere between pretending the microphone isn't there and brazenly showing it off. Godspell picks a side and emphasizes performance itself. Though the story encompasses the life of Christ, it centers on a group of followers discovering the joy of bonding together — and singing at the top of their lungs about it.

Plot is incidental; the focus is on 10 actors singing, dancing and looking for laughs by juxtaposing contemporary human nature and sacrosanct stories. In the ArtisTree Music Theatre Festival production at the new Grange Theatre in South Pomfret, the cast brings youth, energy and solid comic skills to a musical that plays like a glee club concert.

John-Michael Tebelak wrote the original version of Godspell in 1970 as a student project at Carnegie Mellon University. With new music and lyrics by Stephen Schwartz, the show made it to Broadway and has been a high school drama club favorite ever since.

The cast enacts parables with comic and larger-than-life flourishes. When Jesus separates the sheep and goats, the actors baa and bleat on hands and knees, then show anthropomorphic anxiety about being picked for the team. The prodigal son whoops it up like a contemporary bro; the Good Samaritan downs a shot of whiskey before using the alcohol to clean the traveler's wounds. The humor is broad and good-natured and includes some fourth-wall-busting audience interaction.

The Grange Theatre stage is shallow but has a second level the actors can reach by ladders on each side. Carl Tallent's set design aims for an urban feel with handbills on brick walls. A sprawling musical wouldn't fit too well in this newly renovated space, but the sketch-comedy quality of Godspell suits it fine.

The characters are never called upon to embody Jesus' teachings through action, so the musical lacks interpersonal drama. Instead, the performers sing and stage gospel stories, touching serious moments only when enacting the Last Supper and the Crucifixion.

With song lyrics largely derived from hymns, the score roams through a variety of musical styles, including folk, vaudeville soft shoe, rockabilly and some mild R&B. But it's anchored in the rock-musical style. Upbeat and danceable, Schwartz's music is notable for its surprising combinations, such as turning the invocation "Prepare Ye the Way of the Lord" into a jazzy foot stomper.

The musical was designed to be adapted by each company, with changes to highlight current events and opportunities to showcase the talents of particular cast members. This production stuffs in some Vermont references and shows off one performer's tap-dance skills and another's on aerial silks. The parable of Lazarus and the rich man features a Donald Trump imitation salted with current catchphrases. Notably, the libretto for the show has suggested Trump as the go-to rich guy since at least 2011.

Abstract ideas such as income inequality and profligate behavior don't make great targets for satire, but specific people manifesting them do. And if there's no time to create characters within the story, plucking some from popular culture is expedient. According to music director Josh D. Smith, the equivocal musing on sexual morality in "Turn Back, O Man" originally invoked Mae West and, later, Madonna. ArtisTree's incarnation features a singer in a Katy Perry-ish plaid skirt who ends the number by diving into the arms of fellow cast members and cooing, "Oops! I did it again," à la Britney Spears.

Smith has also updated the music to keep the show fresh, adding a hip-hop beat to a chant and weaving a hint of disco into a song. He sings one number and enthusiastically plays electric piano onstage. Occasionally, a door slides open to reveal a polished pit band backstage: Brent C. Mauldin (keyboards), Norm Wolfe (guitars), Mike Conerty (bass) and Ken Swinkin (drums).

The show includes memorable numbers, and the '70s hit "Day by Day" remains hummable and hopeful. Triumphant set pieces have a big feel in the small theater space, thanks to the beefy sound system and bubbly cast.

Alas, that mighty sound did a little more harm than good at Thursday's preview. The performers wear microphones, the better to stand up to instruments played at full intensity. But the mix on Thursday unfortunately swallowed the vocals. The booming rhythm section and adroit guitar and keyboard lines sounded great but overpowered the lyrics.

Director Joey Murray uses the vignette structure to present a broad range of visual ideas. The literalness of each parable enactment varies, but the common thread is a fast-break pace that keeps the musical flying but not frenetic.

Cute puppies can be adorable or irritating, depending on your frame of mind. The same is true of a musical that chirps about being good. This production offers a perky rendition of a popular show, but it's only for audiences in the mood for fluff. Godspell is Christianity lite: "Turn the other cheek" is the answer to a sentence-completion game, not a moral challenge. Finding the feel-good in evangelicalism means going no further than a joyous laugh.

Correction, September 21, 2017: An earlier version of this story misstated the full name of the ArtisTree Music Theatre Festival.