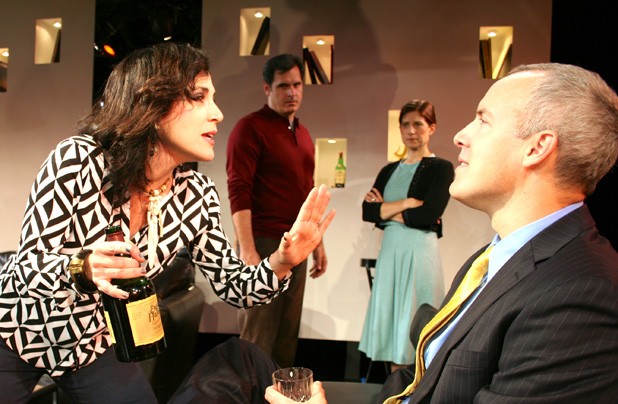 “Don’t judge me while I’m busy judging you,” an underlying theme of “polite” society, has never been more perfectly and comically illustrated than in God of Carnage. Yasmina Reza’s 2009 Tony Award-winning play is currently being performed by Northern Stage in White River Junction.

When the play begins, it seems like nothing more than an updated version of some early-’60s sitcom, such as “The Dick Van Dyke Show.” The plot has all the familiar trappings: upper-middle-class parents, a problem between two of their children and the inevitable “civilized” meeting of the adults to discuss the incident.

Then, like a runaway train car on a long, downhill grade, the satire slowly picks up speed. There are curves where the train threatens to tip over, then rights itself and races even faster and more out of control. Although viewers can predict the inevitable crash, there’s no way to know just how big the destruction will be, or what pieces might be left at the end.

And on this ride, there is no stop — no intermission — to allow audience members to catch their breath. The densely packed, 90-minute piece flies by, as Reza engineers the breakdown of conventions and the collapse of the play’s four parents.

Northern Stage’s playbill quotes Reza as saying this of her work:

I would say that, above all, my plays are about people who are well raised but who lose control of themselves. My characters are for the most part impulsive by nature. You could describe my plays as being a theater of nerves.

Reza satirizes society in ways that would make Molière and Oscar Wilde proud, and she has had a highly successful international career doing so. Her works have been produced worldwide and translated into 35 languages — from the original French — and have won numerous awards. (Vermont Stage Company recently reprised her popular 1994 play Art.)

The flow and quality of Reza’s writing could keep any audience laughing. “I have no sense of humor, and I have no intention of acquiring one,” says serious and self-righteous Veronica Novak, mother of an injured 11-year-old boy. In this clean and simple plot setup, the boy has been struck with a stick by the 11-year-old son of Alan and Annette Raleigh. It happened in a park near their upscale neighborhood in Brooklyn. The fight itself is not unusual among young boys, but the blow has caused a fat lip and two broken front teeth, prompting a parental discussion.

The two sets of parents meet in the living room of Veronica and Michael Novak. As Northern Stage set designer Georgi Alexi-Meskhishvili has created it, it’s a stylish, chrome-and-glass-appointed room that is precisely arranged, right down to the placement of the large art books on the central coffee table. This is the backdrop for the slow but relentless disintegration of the characters — and the room itself will not go unscathed.

Reza’s characters are both stereotypes and unique individuals with personal issues. For example, Michael Novak’s underlying blue-collar, man’s-man persona is complicated by his phobia of rodents — in this case, a hamster named Nibbles, whose fate is an important and hilarious subplot.

Even with intriguing tangents and sharp, rapid-fire dialogue, the play requires a capable director to elevate it above a mere dark comedy. Fortunately for Upper Valley audiences, this God of Carnage benefits from the always-strong comic direction of Catherine Doherty, Northern Stage’s producing director, as well as from a cast of experienced actors. Together they expose every level of comedy and social commentary in the play.

Joe Gately’s conciliatory and upwardly mobile Michael is a perfect foil for the always-ethical Veronica, played by Northern Stage veteran Kathryn Markey. At first their contrasts seem complementary, but soon enough the pair is deftly throwing daggers at each other. Their timing is a joy to watch.

Lena Kaminsky, as the meeker and more dependent Annette, slowly emerges from her shell, spurred by the words and actions of her high-powered attorney husband, Alan. Gregory Jones superbly delivers Alan’s arrogance, selfishness and condescension.

The play’s final moment involving a cellphone is a satirical climax of epic proportions in the hands of this exceptional foursome.

Audiences may leave this play chuckling, but also shaking their heads and thinking a bit about what just happened. As Northern Stage artistic director Carol Dunne puts it succinctly in her playbill notes, “As I watched the first rehearsal, I couldn’t help turning to one of my colleagues, giggling, and saying, ‘Oh, dear, it’s actually all so true!’”

The original print version of this article was headlined "Parent Trap"