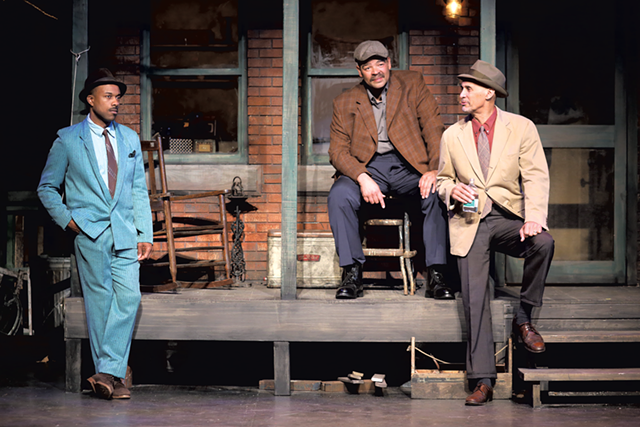 August Wilson's Fences is a play to listen to as much as watch. The very rhythm of speech defines characters and reveals emotion, and Wilson's words express cultural truths through individual stories. The language is colloquial, the setting a backyard in a poor neighborhood in Pittsburgh, but the speeches ascend to turning-point intensity.

JAG Productions has chosen to begin its planned presentation of Wilson's 10-play Century Cycle with Fences. The playwright's ambitious Cycle is a view of the African American experience in the 20th century, with each play set in a different decade. Most take place in the same Pittsburgh neighborhood.

Written third, Fences falls at the chronological midpoint, in the late 1950s. It premiered in 1985 and won the 1987 Pulitzer Prize for Drama and Tony Award for Best Play.

Troy Maxson is a 53-year-old African American garbage collector, unremarkable on the surface. Wilson invests him with a raconteur's self-confidence and a fierce streak of resentment. Then he surrounds him with a friend and family who take pleasure in being his audience and hope, in different ways, for a bit of his love. But duty and regret make Troy too tempestuous to dole out much.

He gives his adult son, Lyons, a hard time about his lack of a steady job, willfully ignoring the joy the young man finds in music. Or does he? Because, as much as Troy scolds him, Lyons ends up with the $10 he asks to borrow and takes in his dad's long lecture with a smile on his face. If Troy is frustrating, he is also fascinating.

Friends and family have to make peace with the best and the worst in him. His old friend, Bono, likes to share a bottle of gin and listen to Troy's stories, but he can't condone his friend's philandering. Troy's son Cory is in high school and shows an aptitude for football, but Troy blocks a recruiter from opening the door to college football. His brother Gabriel sustained a head wound in World War II that left him mentally impaired, and Troy both champions and exploits him.

Troy and Rose take great pleasure in their marriage, but it's built on a fragile balance of sacrifice and need that only love could bring into equilibrium.

Troy fights, drinks and womanizes, but no single deed defines him. He fights, all right — against the sanitation company that keeps him picking up garbage and not driving the truck. He fights his dreams, as a former Negro League baseball star who came along before Jackie Robinson and never got to the majors. He fights his father, and then his son. If it can be believed, he once fought the devil himself, but that's just how Troy talks, always surrounded by people who will listen.

Troy makes a myth of himself — the only way a person of so many contradictions can cohere. He's a family man who missed his first son's childhood while in jail; he's devoted to his wife, Rose, but eyes every woman in his path; he's charming and cruel, a dreamer and a realist, self-aware and self-deceived. The miracle of this play is that Troy remains riveting even at his most reprehensible.

Fences is constructed of one-to-one relationships, but this production is at its best in the monologues that showcase individual characters. The friendship between Bono and Troy fades without a great sense of loss, and the tension between father and son has more outward fury than inward anguish. But in Troy's expansive stories, Rose's realizations and the supporting characters' reflections, everyday struggles become captivating.

Brian Anthony Wilson, as Troy, has the large stature and melodious voice to give the character commanding presence. Wilson enters with a swagger and a stiff hip, a physical contradiction that exemplifies Troy as a paradox. The actor summons majesty from his voice and fire from his presence.

While Troy rants, Rose peels potatoes. Danielle Lee Greaves captures Rose's tunnel-vision optimism with an easy smile that can break into radiance. As Lyons, Nathaniel J. Ryan stretches his fingers wide to show his father how little it would take to lend him $10. Within that gesture, and his relaxed slouch against the porch, Ryan conveys the son's acceptance of what little his father will give.

Ralph McCain plays Bono with stately dignity. He creates an aura around Troy just by listening intently but isn't afraid to answer back when the time comes. Jolie Garrett, as Gabriel, hits the play's final note with transformative power.

As Cory, Gabriel Jenkinson is at his best sorting out just what his father gave him as he sings his dad's favorite song with a blend of melancholy and happiness. Third grader Celia Graham shows fine stage presence as Raynell and makes her reactions look real, not rehearsed.

Director and company founder Jarvis Antonio Green places the characters in languid comfort in that simple backyard, as if they had all the time in world, then lets the story and his skillful blocking trigger their confrontations.

The set, designed by Carl Tallent, is richly detailed, down to the power line slung between two row houses. The sharp lines of the house and porch stand out in relief against the blur of a decaying city, a visible testament to Troy's pride and struggle.

On a nicely realized tree in the yard hangs a baseball on a rope, with a bat leaning against the trunk. Troy takes away his son's dream but leaves his own hanging in the air, a baseball to hit, or to hate. Wilson's play is an eloquent statement of a character's need to control attention once the ability to control events is lost. If you listen to Troy Maxson, you'll hear his pain and his power.

The original print version of this article was headlined "Fighting Words"