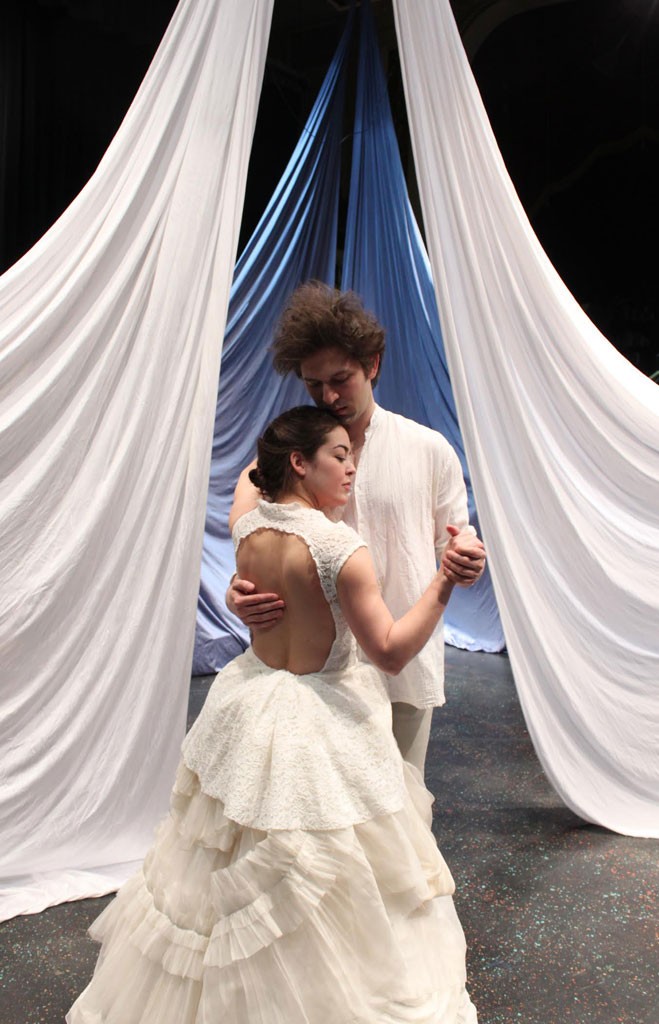 The myth of Orpheus and Eurydice is elemental: love, death, a desperate wish granted, then a simple human mistake that leads to permanent loss. In playwright Sarah Ruhl's imaginative retelling, the focus is on Eurydice, and the tone is at once dreamy, funny and profound. Love and loss are universal, and Ruhl's approach beckons audience members to project their own experiences onto the ethereal world she constructs.

The playwright's text is deceptively simple — so open that it invites the interpretation of each director and the reflections of each viewer. At Montpelier's Lost Nation Theater, director Eric Love gives the production powerful theatrical effects that showcase live performance. A play that moves freely between the underworld of the dead and life on Earth needs clever visual conventions, and Love builds his show around movement.

Drawing on the physical skills of Kate Kenney (Eurydice) and Christopher Scheer (Orpheus), Love occasionally has the performers climb, spin, balance and slide on aerial silks. Hanging from the ceiling, the silks are two columns of wide fabric, thick as ropes but easy to loop into knots that steady the climber or to spread into billowing arcs.

Performing aloft lets the actors do the equivalent of bursting into song — show their feelings with vigor and daring while climbing and entwining with each other or emoting alone. The audience experiences a circus-like thrill, but the aerial work here is not a gimmick; it's an enhancement of the characters' experience. Friday's spectators couldn't resist clapping after the first up-in-the-air routine, but they soon learned to refrain. These aren't stunts begging for applause but visual metaphors.

In the myth, Orpheus and Eurydice marry happily, but she soon dies. Orpheus yearns to bring her back and charms the lord of the underworld into releasing her. But there is a condition: Orpheus must walk out without looking back at her. It's a test of faith and patience, the very qualities he has. Yet he fails.

To the central story of two young lovers separated by death, Ruhl adds a new character. Eurydice's father is dead, but has dodged the typical immersion in the river of forgetfulness. He can watch his daughter and compose heartfelt wishes to her, simultaneously mourning his distance from her and rejoicing in her happiness. When Eurydice dies on her wedding day, she arrives in the underworld without memory, and cannot grasp the tragedy of her separation from Orpheus nor recognize her father.

At first, Eurydice cannot speak — when she opens her mouth, we hear radio static. But a chorus of nine beings called Stones teach her to concentrate on speaking "as if the pores of your skin opened up and talked." Death brings new rules for speech and reason. Ruhl is adept at mixing images such as these into sensations; the play's power lies in making you realize you can feel without analyzing.

The dual focus on Eurydice's love for Orpheus and for her father sends the myth in a new direction. Ruhl wrote the play after her own father's death, and what she works out about the nature of grief will be emotionally familiar to anyone who's lost a parent or a child. Eurydice's father lovingly helps her reconstruct her memory, story by story, word by word. It's a stunning parallel to a parent's gift of life.

Meanwhile, Orpheus struggles to find Eurydice, even as she settles into a new connection with her father. The bereft husband's resolve makes itself manifest in his letters to his beloved — thoughts both deep and shallow with a comic overtone — and in another bout of aerial climbing. While in the air, Orpheus resolves to pursue Eurydice, even as she floats with parallel movement on another aerial silk.

When Orpheus descends to the underworld, he not only slides down his silk but spreads its two columns into a heroic cape that masks him — then snaps the sides shut and appears to vanish in a thin column, as if plunging below. It's a breathtaking moment and an example of Love's deft use of the theatrical power of acrobatics and the shapes of the silks.

In outstanding performances, Kenney and Scheer emphasize the simple clarity in Ruhl's distinctive language. They play lovers without irony and suffer without artifice, giving equal weight to the play's humor — it rains in the elevator down to the underworld — and its dreamy lyricism.

Kenney distills the experience of a young lover to its essence: all hope and joy. Her aerial poise is so lovely that it's easy to forget she's working as hard as a dancer up there, and achieving similar effects. She crisply finishes each airborne movement, pointing a toe or holding a horizontal suspension with precise awareness of her body in space. When Eurydice reaches the underworld without her memory, Kenney assumes a different energy. Eurydice labors to feel anger at those dull, solid, unfeeling Stones, and works harder still to sift through a feeling of loss so huge she can't define it. The sight of her, visibly powerless, lingers as the play's understated expression of grief.

Scheer is a charming mix of ardent and offhand. His love never needs its flames fanned — he has simply discovered a powerful truth and doesn't need to embellish it. Orpheus is a celebrated musician, but Scheer plays him modestly low-key. With endearing charm, Scheer conveys his love of Eurydice while reminding us how he remains preoccupied with the melodies in his head.

On the silks, Scheer goes from brisk motion to dead stop, resting his foot on a loop, then shaking the knot loose to climb higher or shift from vertical to horizontal. When he walks out of the underworld, Scheer moves with beautiful calm, eyes focused far away. We want so badly to believe he's incapable of the mistake of looking back.

The nine young actors playing the Stones achieve a polished synchronicity in movement and speech. The script calls for three Stones, but Love's decision to amplify them allows for more dance movement and more vocal resonance.

Robert Nuner, as Eurydice's father, conveys simple nobility in his heartache, never overdramatizing. Though his figure is slight and he moves gently, he becomes a commanding presence as he methodically reveals Ruhl's poetics of death. Director Love himself appears in the play's two quasi-devil roles, and plays the cello onstage to represent Orpheus' musical passion.

The play is a dream world where the biggest human emotions are not clichés. Ruhl's unconventional language offers us the freedom to feel love and to wonder at the deep mystery of death. It is a stimulating mesh of the real and the unreal, and a rewarding theatrical experience.

The original print version of this article was headlined "Dead Reckoning"