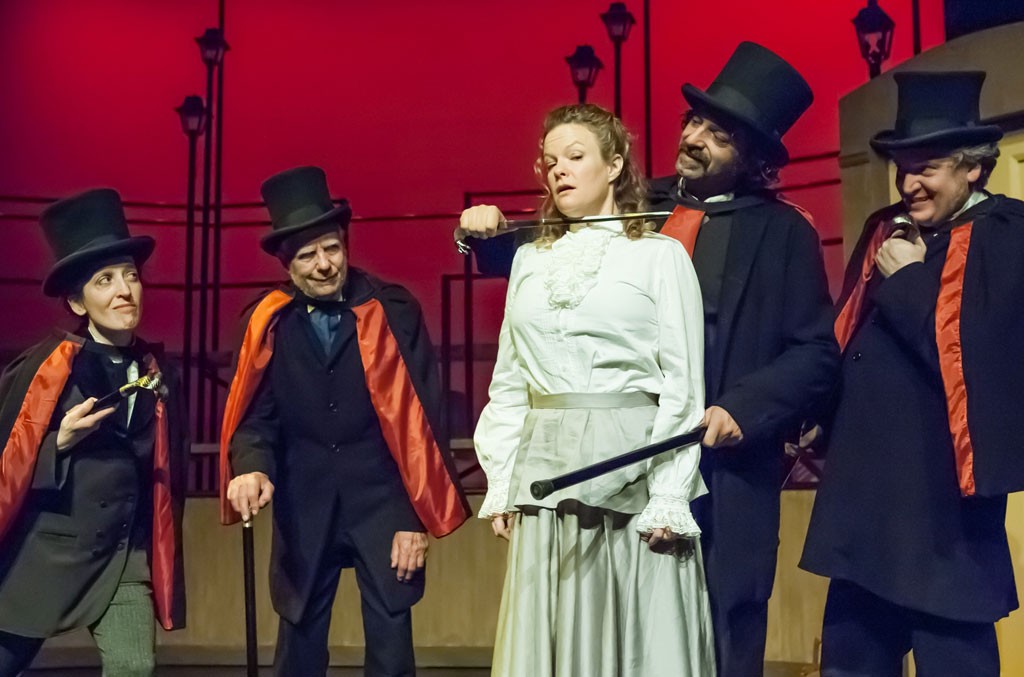 Against a blood-red backdrop, rows of gas lamps set on slender poles suggest a stylized, and unsettling, 19th-century London. A freestanding door of convincing detail stands center stage, and the action begins with a hand breaking it down to enter a room. Throughout the play, that door, spun on casters to reveal its interior or exterior face, is a bold expression of the duality of inner and outer that forms the landscape of Dr. Jekyll and Mr. Hyde. The door is a boundary, and also an entrance.

Jeffrey Hatcher's 2008 adaptation of Robert Louis Stevenson's story uses a few new tricks, and the Middlebury Actors Workshop production makes the most of Hatcher's modern, rapid-fire storytelling. Under Melissa Lourie's direction, there's a gliding flow from scene to scene as the cast of eight emphasizes Hatcher's interest in fantasy over psychology.

Hatcher uses one actor to portray Jekyll and four to play Hyde. The transformation is no Bruce Banner-to-Hulk agony, but a subtle pas de deux, or an offstage event. Sometimes Hyde appears alone, but the play often manifests Jekyll's Hyde-side with a primary actor surrounded by a chorus of three others, one of them female. Hyde's brutish aspects radiate outward, like ripples on a pond, while Jekyll's silky goodness resides in a single, repressed figure.

The convention is interesting theatrically, though it doesn't carry Stevenson's story to any new heights. Hatcher takes the essential premise — a potion that causes a man to externalize the extremes of good and evil within him — and then counts on it to carry the entire show. It's a powerful metaphor, but insufficient on its own to create characters or plot.

Building the play in brief episodes, Hatcher doesn't so much tell the story as allude to the audience's familiarity with it. His best innovation is finding flaws in Jekyll and balancing them with virtues in Hyde. Jekyll essentially becomes the play's villain, stifling the life force of Hyde and coming up with schemes to send the police after his untraceable alter ego to save his own skin. Hyde, meanwhile, is given a love interest, though the play really staggers when trying to reconcile Hyde's bloody batterings of whores with his vaguely wholesome affection for a chambermaid.

The emotional peaks occur when Jekyll and Hyde voice their mutual contempt for each other. Hyde calls Jekyll "the great, gray corpse that carries me to my pleasures," and Jekyll sums up Hyde by saying, "He is his appetite, bound into a red fist." Their confrontation never goes further than seeing themselves, but the personification of human duality is powerful.

Stevenson's enduring premise is that all of us contain demons. The big decision to be made in staging this tale as a play is how extreme the outward manifestations should be made. Inflate Hyde too big and he's no longer an aspect of personality but an unthreatening caricature. Shrink him too small and he's nothing but a bad mood. In this production, Lourie aims for the middle ground, adding splashes of stylized violence.

Paul Ugalde, as Jekyll, spends much of the play as the serene master of his transforming potion. Ugalde might be a little too comforting — his gray-haired Jekyll is so righteous and capable that his eventual descent is more abrupt than gripping.

As the main Hyde, Jordan Gullikson is feral, loose and magnetic. His Hyde is no campy, heavy-breathing ape, and yet emotional nuance is impossible in this role. What's impressive are Gullikson's physical power and moment-by-moment concentration onstage.

Chris Caswell plays Elizabeth, the maid who captivates both Jekyll and Hyde. This thoroughly implausible character strains the bad-boy theory of female attraction to the breaking point. Still, Caswell gives her scenes urgency and power, and nearly makes up for the material. Patrick Clow plays one Hyde plus a range of supporting characters, polishing each with outward traits to make up for the lightweight text. Tacking on superficial tics works well in most cases, but giving the nasty Dr. Carew swishy mannerisms falls somewhere between demonizing gays and settling for easy laughs.

J. Louis Reid may look like a charming grandfather, but he provides Hyde's most blood-curdling growls. Marianne DiMascio is quite effective as the female Hyde and as Jekyll's dutiful servant. Cody McGlashan and Kate Tilton portray background characters with fine focus and intensity.

The first hour of the 90-minute show feels slow, despite frequent scene changes. This production can't inject a lot of life into Hatcher's labored scenes, imbued with stuffy Victorian manners yet played as abbreviated sketches. But after intermission, the storytelling and performances grow wonderfully energized. Once Jekyll begins his inevitable downward spiral, the production is riveting.

The set by Ellie Friml presents three worlds: simple risers that serve as a hospital operating theater, a vast backdrop for light projections that express pure mood, and a foreground of richly detailed furnishings that wheel in and out to define interiors. Using just enough furniture to evoke a room, Friml creates full pictures, from Jekyll's lab of bubbling beakers, eerily lit from below, to a single stool that conveys a private investigator's office.

Christopher Belanger's lighting is designed to pinpoint moods and focus the audience's attention spatially. The rapid scene changes occasionally got ahead of the light cues in Friday's performance, but the ambitious effects made up for the mistakes. When those effects work, as in the background drenched in hellfire red or the dark corner of a London alley, the lighting adds depth to the production.

The detailed period costumes by MaryKay Dempewolff contrast nicely with the set's abstraction. All the costumes are excellent, and the sharp red bands on the capes worn by the various Hydes provide perfect visual punctuation.

Hatcher's use of multiple Hydes and a slippery Jekyll trying to get away with murder is a new twist, but the story always comes down to personifying the struggle between good and bad impulses. Though Lourie's staging is visually strong, the characters lack the psychological depth to make that battle compelling. The performances have true professional polish, but the shallow script limits the play to a simple dichotomy whose power begins and ends with visual statements. Wisely, this production capitalizes on strong presentation — so much so that Hyde's hungry gaze may burn a long time in your memory. m

The original print version of this article was headlined "Gruesome Twosome"