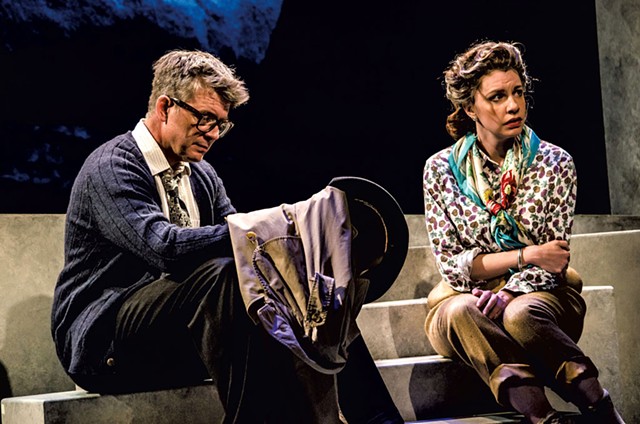 Dorset Theatre Festival is presenting the regional premiere of Sarah Ruhl's 2012 Dear Elizabeth, a play drawing on the 30-year correspondence between poets Elizabeth Bishop and Robert Lowell. Ruhl confines her text to selected letters and a few of their poems, inventing no dialogue of her own.

Bishop and Lowell's 450-some collected letters were published as Words in Air (2008). The duration of the correspondence may say more about the friendship between these two poets than any given letter does, and no biographical volcano erupts in Ruhl's dispassionate distillation. In Dorset's production, director Adrienne Campbell-Holt mixes realism in the actors' reading of their letters with resonant, nearly mythic physical staging of the poets' few encounters with each other.

The stage is duly divided into three parts: a writing room with desk and window for Bishop, a desk and massive bookcase for Lowell, and a liminal space in the center. The props and details in the writing rooms are quirky yet realistic, while the center of the stage is an immense gray frame, its horizon slyly tilted, above asymmetric stairs. The frame holds tidy title slides to set scenes, plus projections that spill out beyond its borders to show clouds, planets or landscape fragments that seem to flood from the characters' imaginations onto the wall.

The play counts on the audience's familiarity with core biographical facts about Bishop and Lowell. It's fine to dispense with tedious exposition, but only if it's to make room for narrative that's more powerful. In this case, Ruhl handles Bishop's drinking by having her pull a bottle from a drawer, drink from it and then drop it in a wastebasket — hardly a full picture of her struggle with alcoholism. Lowell's bipolar disorder is depicted, by turns, via a title slide that announces he's at McLean Hospital and, later, with blocking that places him asleep atop his desk, a pose that makes mental illness merely an interruption that suspends his writing output. Ruhl chose no letters to shed more light on these major events.

How these two people produce magnificent poems while coping with such problems could be a biographical play's essence. But the letters Ruhl selects do not constitute a full portrait and give few hints of what animates the characters. Instead, we savor their wit and the tang of gossip about their literary contemporaries. The letters include compelling moments, such as Lowell's thoughts on becoming a father and Bishop's reconciliation to her loneliness. But a good bit of the play is expended on details such as letting us know that Bishop just got a toucan and that Lowell left a lighted cigarette in his coat pocket. The texture is lovely, but it never forms a story.

Ruhl has something else in mind, and she doesn't indulge in simplistic psychological portraits. She stands at a bracing distance and lets the letters disclose the largely superficial facts of the characters' lives without any hoary "what it all means" moments. Though she dangles an obligatory what-might-have-been through a Lowell letter wondering why he didn't propose to Bishop, sexual tension is not the theme of the play.

The playwright's open-ended structure gives Campbell-Holt occasions to use sound, movement and setting to meditate on the nature of communication itself. To Ruhl's metaphor of a wire strung across the stage to ferry a postcard from Bishop to Lowell, the director adds her own touches: a stylized hesitation before they holds hands during a walk on the beach, various conventions for the physical delivery of letters and objects, and faintly surreal pantomime of the moments when they met in person.

Bishop's dry wit and keen self-knowledge come through clearly in the letters. But it's Andrea Syglowski's gorgeous search for the nooks and crannies in this character that rivets attention. Ruhl's choice of letters doesn't give her much to work with. But Syglowski's steely look before responding to Lowell's description of his new girlfriend with "I am glad the lady is beautiful; that really cheers one a lot" is all we need to know about how she handles jealousy.

Syglowski uses subtle changes in voice, posture and movement to show her character aging. It's not merely the loop she attaches to hang her glasses from her neck, but her careful movement as she fits on the chain that suggests she's in her sixties. Syglowski gets the play's strongest statements about making art, and she exhibits just the right amount of urgency when Bishop startles herself by asking, "When does one begin to write the real poems?" Her nuanced performance irrigates the dry desert of the material.

As Lowell, Chris Henry Coffey is splendidly rumpled and plays the expansive, restless poet with earnest humor and rakish desire. Both he and Syglowski make the poets ordinary physical figures, without glamour or grace. In Lowell's case, Coffey portrays the poet's engagement with the world by bending his tall frame in curiosity and moving with impulsive energy.

Dropped lines marred his performance on opening night, a problem worth remarking on only because the crucial rhythm of a two-character performance failed to materialize. The lost lines were surely recovered in subsequent shows, but will these two actors communicate as perfectly as Lowell and Bishop did?

That's the central question of the play's potential. Ruhl's subject is connection, and that demands two actors working in harmony. Stylistically, Lowell's confessional poetry is far from Bishop's formal, objective precision. Perhaps the most fascinating part of their friendship is how much each valued the other's opinion, even though their work was so different. The mesh of two minds is the crucial story here, and on Friday night, a performance without a shared tempo to unite two actors didn't express it.

The letters don't form a story, but they do pay homage to friendship, and to writing itself. In the end, the play is a landscape painting, not a battle scene. Gaze upon it expecting comfort and some humor but little rapture.