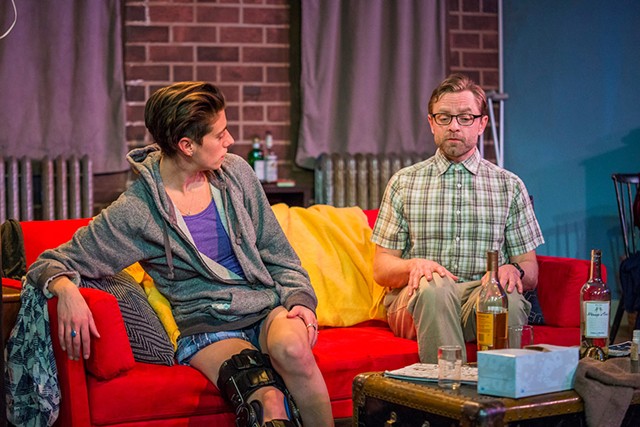 Mark St. Germain's comedy Dancing Lessons takes a simple romantic arc and makes it memorable with great humor and fascinating characters. The two-person show now playing at Vermont Stage serves up the most feel-good message of all: Change is possible, even when chances look bleakest. It's the best kind of bittersweet.

Senga is a Broadway dancer with a leg injury that keeps her from working and seems the definitive excuse for self-pity. Her apartment neighbor, Ever, is a prominent college professor of geoscience whose Asperger's syndrome is no detriment to intellectual achievement but has crippled him socially.

Senga's problems seem to be repairable, while Ever's brain will stay wired as it is. Each is broken, but their ways of coping couldn't be more different, and if Senga's depressive approach seems more normal, Ever's weirdly emotionless problem solving might be healthier. He's come to Senga to buy a dance lesson so he won't embarrass himself at an upcoming awards dinner dance. She's not interested; he won't give up. And so another kind of dance begins.

The play is a romantic comedy, but it includes moments of such sharp tenderness that it's easy to forget they're wrapped inside a formulaic plotline. This production elevates the story to reveal its poignant core, without neglecting the comedy along the way.

Cael Barkman (Senga) and Andrew Butterfield (Ever) don't take the easy, maudlin route, working instead to create roles with depth. Director Cristina Alicea nestles the humor within a pace slow enough to disclose character. Comedy often favors a roller-coaster approach, but Alicea has designed a lovely carousel, the better to show how the protagonists change and grow.

Change is at the heart of Dancing Lessons, but the obstacles to it are especially high in this story. The cure for Senga's injury poses too great a medical risk for her, while Ever, as much as he's reconciled to his condition, lives on the fringes of society, afraid to touch or be touched.

The performances are grounded in physicality. Ever is hunched up, arms clamped to his sides, constantly plucking at his pant seams. His hollowed stomach and rounded shoulders visually portray his ongoing retreat. Senga wears a leg brace that defeats grace, but the strength and harmony in her body remain evident. She demonstrates all the beauty of someone who knows how to make movement ripple from head to toe, and it's easy to imagine the past stage triumphs she now mourns.

Along with the clenched posture, Butterfield gives Ever a loud voice and rat-a-tat speaking speed. These bold signs of difference can be a bit distracting, and even raise the question of how accurately they evoke a person on the autism spectrum. But fidelity is not the question — as the script itself notes, everyone with autism is different.

Theatrically, Butterfield's choices hammer so loudly that they create an exaggerated gulf between Ever and what he calls "neurotypicals." There's a risk of caricature when an actor enlarges a quality in this way, and Butterfield's performance includes some Mork-like comic oddities that almost contradict Ever's success as a high-functioning "Aspie." Overall, though, it's an impressive and thoroughly engaging portrayal.

Barkman is a comic powerhouse with gorgeous timing and an ability to use her whole body to tell a joke or wrench out a tragic insight. She uses luscious pauses to release rejoinders that lean toward the savage and settles her character into languorous, bitter contemplation of her dance career's end.

After reluctantly agreeing to teach Ever how to behave on a dance floor, Senga gives him a range of smooth moves to copy. He mangles them into stiff little paroxysms. "Pretend you're enjoying it," she encourages. "It's dancing, not waterboarding." While the scene includes about the worst dancing you'll ever see onstage, it's filled with need as well as humor. The entire play strikes a successful balance between making us laugh at something and helping us understand it.

Barkman and Butterfield give us a chance to see the armor on their characters slowly fall away. Alicea keeps the comedy in the forefront; laughs accompany even the tender moments. When Ever and Senga investigate touching each other, it's not a realistic progression — a fear like Ever's might not be overcome at all, much less within a single evening. But it is a beautiful story nonetheless.

Several times during Thursday's performance, a rapt hush fell over the audience. Dancing Lessons elicits plenty of laughs, but it's easy to get lost in the serious side of these sympathetic characters.

Directorially, it's tough to build a scene from a woman sunk in despair and a man who avoids her gaze, but Alicea handles it. She sometimes stations the actors far apart to emphasize Ever's aversion to touch, but she skillfully keeps a sense of pursuit in the blocking and steers the focus from one character to the other.

Kate Fulop's costumes capture Ever's conspicuous search for the inconspicuous, with tucked-in plaid shirts and buttoned-up polos. His boxy glasses hit that nutty sweet spot between Warby Parker cool and don't-know-any-better hopeless. For Senga, Fulop provides workout shorts that reveal the leg brace and sloppy bathrobes that say she's all but given up.

The first step in a romance is rarely easy, but Ever's plunge is especially precipitous, and Senga needs to find the courage to exorcise deeply hidden demons. The play is a respectful, if not entirely realistic, look at a person living with autism. Factual accuracy is hardly the point, though — what's true here is the human heart.