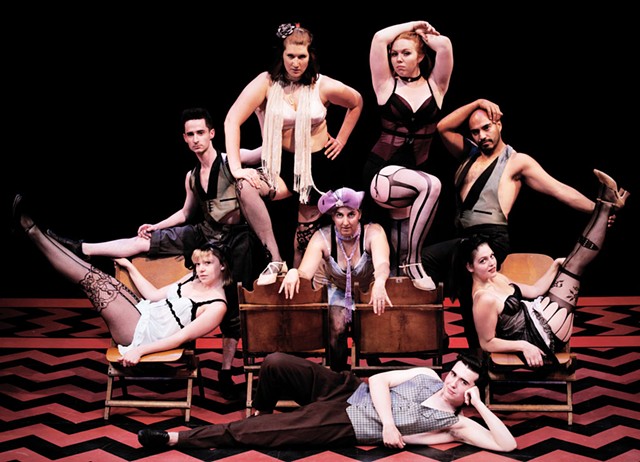 The human impulse to seek shelter from a storm can kick in just as strongly when the gathering clouds are political, not literal. Artists and entertainers — reliable purveyors of escape from the daily grind — created legendary safe havens, in fact and in fiction, from the horrors of 20th-century war. The dadaists had their Cabaret Voltaire in Zurich during World War I. The 1942 film classic Casablanca finds Europeans lingering at the oasis-like Rick's Café Américain while they await their chance to flee the Nazis during World War II.

The politically turbulent and economically dismal interwar period in Germany, infamous for fostering Adolf Hitler's rise, is the setting of the beloved 1966 Broadway musical Cabaret, a production of which is currently running at Lost Nation Theater in Montpelier.

Musical theater may not stand out in the popular imagination as the go-to genre for penetrating interrogations of cultural conscience, yet Cabaret has endured as a testament to the human need to seek refuge in the company of others. The musical's main setting, the Kit Kat Klub in Berlin, is the ultimate safe space — a world within the world, beyond the reach of right-wing politics and moral judgment. The show's opening number couldn't make its invitation to the audience any clearer: "Willkommen! And bienvenue! Welcome! / Fremder, étranger, stranger."

The night seems eternally young inside the Kit Kat Klub. Cabaret's legions of fans know, however — and LNT's audiences can discover for themselves — that the sense of limitless freedom and unfettered hedonism is as ephemeral as a summer vacation. LNT's staging presents both the party life and the impending hangover with zeal and dramatic conviction, framing Cabaret as a stark before-and-after look at German life as the Nazis seize power.

The iconic status of the show's opening song no doubt owes much to Joel Grey's turn as the Kit Kat Klub master of ceremonies in the popular 1972 film adaptation of Cabaret. Playing this role, renamed Emcee, in the LNT production, Bailey Forman carries the torch confidently, which is to say overconfidently. And that's not a criticism. This impresario's invitation is more like an insistence. He struts about the stage with a provocative leer, occasionally venturing into aisles as if to drag someone off the street. Forman sings strongly as he moves, giving Fred Ebb's lyrics and John Kander's music enough dramatic flair to set the show's mirthfully transgressive tone.

Under Tim Tavcar's direction and Taryn Noelle's choreography, this Kit Kat Klub hesitates not a beat in delivering on the Emcee's promise of a naughty good time where almost anything goes. Dance numbers feature high-energy, high-kicking, high-heeled performers in racy, revealing costumes and routines that make optimal use of the theater-in-the-round stage.

The stage floor is painted in red-and-black zigzag patterns that evoke German expressionist scenic design of the period. Per Travis George's scenic concept and James McNamara's lighting design, the stage remains uncluttered throughout the show, the lights giving way to shadows at the perimeter. A small table with a single chair sits in each corner, holding a telephone by which patrons can call someone who has caught their eye across the room. When action moves outside the Kit Kat Klub, an ottoman and day bed carried onstage suggest modest living quarters.

Despite the set's muted tones, the mood is ebullient and gay, the sense of immersion in the scene intensified by the live seven-piece band directed by Patrick Wickliffe. Their crisp playing sometimes yields to a looseness that mimics a nightclub's boozy ambience.

The Cabaret story begins in earnest when Pennsylvania novelist Cliff Bradshaw, played by Sam Balzac, arrives in Berlin in search of inspiration. He's guided to the city's best hot spot by fellow train passenger (and smuggler) Ernst Ludwig, played by Adam Woogmaster. Although Cliff is a stranger in Berlin, he's no stranger to the temptations of places like the Kit Kat Klub. On his first visit there, just hours after his arrival, he bumps into an acquaintance named Bobby, played by Jack J. Dwyer, with whom he apparently hooked up at a bar in London.

He also meets British chanteuse and Kit Kat Klub headliner Sally Bowles (Noelle). She becomes his intimate companion when she shows up, uninvited, at the flat Cliff rents from Fräulein Schneider (Kathleen Keenan). The lonely landlady has a neighbor, the widower and fruit vendor Herr Schultz (William Pelton), who gradually wins her affection through companionship and gifts of fruit scarce in the economically dismal Weimar years.

The relationships among these principal cast members give Cabaret its emotional heft, particularly as seismic political shifts put increasing strain on them. Curiously, though, throughout the first act, one sees only glimmers of the cast's depth and range.

Balzac and Noelle, in particular, are both talented actors with mature singing voices. One expects from their first encounter that their characters will form a romantic pairing, yet precisely what they see in each other is obscured by the razzle-dazzle of song and dance numbers; their connection comes across as more automatic than motivated. 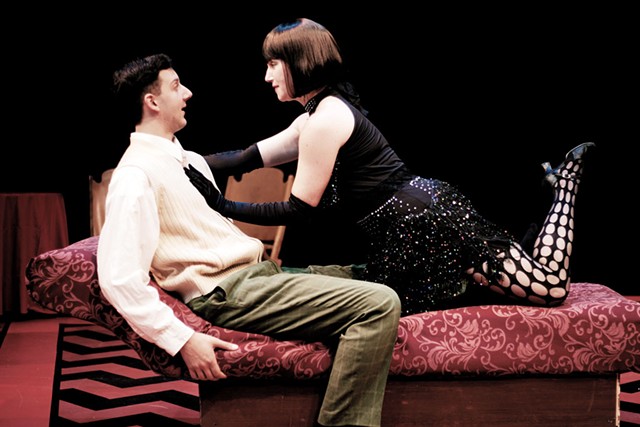 The contrast with the second act, in which deeper personal story lines mute the merriment, is stark — and welcome. As Cliff and Sally contemplate their future together, one finds greater nuance in the actors' performances. Balzac's aw-shucks author adopts a more jaded bearing and a more jaundiced eye as he grapples with his faltering financial circumstances and his fickle lover, who is not his lover alone. Noelle, for her part, plays up Sally's tragic dimension, from which she seeks salvation in Cliff. At last, there is something at stake for these expats adrift.

Likewise, the budding romance of Fräulein Schneider and Herr Schultz is accented by almost palpable tenderness. If Cabaret initially drew us into a pleasure dome where nothing mattered, now we witness vulnerability to the wicked forces of an outside world where everything matters. In a turning-point scene, Ernst Ludwig reveals his allegiance to the Nazi party and effectively draws a dark line separating those who belong in the new world order from those who don't.

At this juncture, each major character faces a difficult decision. For Cliff, it's whether to remain in Germany or return to the U.S. For Fräulein Schneider, it's whether to go ahead with her engagement to the Jewish Herr Schultz, a dilemma evoked movingly in Keenan's solo number "What Would You Do?"

In this way, the LNT production of Cabaret gains a different kind of dramatic momentum as it approaches its resolution and distances itself from its frothy introduction. The show's strongest, most poignant scene is its last, the details of which I won't disclose here, save to observe that it departs from what came before — in costumes, lighting, music, mood. Forman's Emcee and the dancers were there to frame the story as it began, but their ultimate role is not to invite revelers to a party. Instead, they usher in, as Cliff intones in his own bookending lines, "the end of the world."

Cabaret is a complex work of musical theater that evokes important themes linked to the dark drama of postwar deprivation, nationalism, fascism and anti-Semitism. In two distinct acts, this ambitious LNT production reminds us that a happy place is a welcome respite in troubled times — but doors and walls can't hold history at bay.