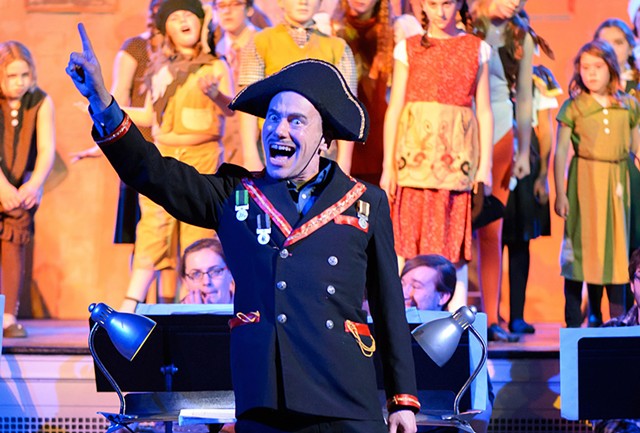 An extraordinary production of the 1938 Czech-Jewish children's opera Brundibár is taking place this month at Burlington City Hall Auditorium. While the opera tells a story of victory over oppression, its performance history is a far darker tale.

By way of an introduction and opening act, Randolph-based No Strings Marionette Company gives a puppet presentation of another Czech work, the 1920 serialized story The Cunning Little Vixen. Performed without speech, the fable tells of a forester who adopts a cute but misbehaving fox. The forester's wife finally shoots the animal dead. Yet the fox, returned magically to the forest, revives and lives again.

Vixen, which faithfully follows Rudolf Tsnohlídek's original tale, helps prepare the audience for another happy ending, in Brundibár, that only exists onstage. Hans Krása's opera tells the story of young Aninku and her brother Pepicek, who rally the children of an entire town to drive out Brundibár, an organ grinder who is also the town bully. The real events surrounding the opera's early productions, however, leave no reason to cheer.

Krása wrote Brundibár for a Jewish boys' orphanage in Prague but missed its premiere when he was imprisoned in Theresienstadt, a Czech concentration camp. The Nazis used Theresienstadt, aka Terezin, as a fake model ghetto, allowing its prisoners to pursue cultural and artistic projects before deporting them to the death camps. There, Krása reworked the opera using a score smuggled in by a musician.

Brundibár received its Terezin premiere in September 1943, became a camp favorite and was performed 55 times over the following year. Visiting Red Cross dignitaries were shown a performance in 1944, and the final one was filmed for the staged Nazi propaganda film Theresienstadt: The Führer Gives the Jews a City. Krása and most of the children who performed were subsequently gassed at Auschwitz.

The Burlington production is a collaboration of In Tandem Arts, Trish Denton's "social arts agency" (Denton directs), and Theatre Kavanah, an organization dedicated to producing Jewish works. At last Saturday's matinée, Sharon Panitch — who, with fellow Kavanah founder Wendy Stein, produced the show — did not dwell on the opera's grim history, suggesting instead that audience members learn it from the program notes. That allowed the many children present to enjoy the driving, upbeat energy of the performance. (Brundibár and the Holocaust is the focus of two local lectures this week by Anna Hájková.)

Panitch's 11-year-old daughter, Zoe Hecht, plays Aninku opposite Nathan Brown as Pepicek. (At least five parent-child pairs participate in the production.) Both are convincing as distraught, fatherless children whom the doctor sends to town to buy their ailing mother some milk, even though they have no money. Using head mics — sound artist Kurt Thoma helps overcome the auditorium's difficult acoustics — the children sing their backstory in folksy, less-than-straightforward tunes. In between, they speak in rhymed verse.

Denton used Tony Kushner's translation of the original libretto by Adolf Hoffmeister, despite its prohibitive costs. In a phone interview, the director said she passed up a cheaper version she could have obtained from an acquaintance of Robert De Cormier, the former Vermont Symphony Orchestra Chorus conductor who organized the VSO's Terezin Remembered Project in 2010. (That work is centered on the camp's performance of Verdi's Requiem.) Denton said she preferred Kushner's attention to the cultural specificity of the Czech original.

Kushner wrote the translation for a 2006 Broadway production of Brundibár, collaborating with author Maurice Sendak. The pair also wrote a 2003 children's book based on the opera.

The story continues with Aninku and Pepicek arriving at the town market, where a baker, ice cream maker and milkmaid, all played by adults, hawk their wares. The music and direction both become complicated here, with rhythmic irregularities performed without incident. Conductor Yutaka Kono, well-known for his patience with younger musicians, and In Tandem choral director Rebecca Mack helped clarify the score for the cast and 10-member pit orchestra. The latter includes pianist Annemieke McLane and members of the University of Vermont Symphony Orchestra, which Kono conducts.

Stumped by the inviolable rules of capitalism — no money, no wares — Aninku and Pepicek soon take note of the money that townspeople throw at Brundibár simply for turning the handle of his organ. The children hit on the idea of singing songs for money, and a number of set-piece duets follow.

Burlington cartoonist and graphic novelist James Kochalka landed the opera's title role accidentally when he accompanied his son Eli (who sings in the secondary ensemble) to the auditions. But he might have been created for it, so thoroughly does he relish the part. Dressed in an oversize Napoleonic hat much like the one in Sendak's drawings in the book, Kochalka puts his years of rock performance to work, strutting and bellowing his lines and songs like a true (but entertaining) bully.

After the children sink, defeated, into sleep, they are visited by a magical sparrow, cat and dog, and the rebellion is born. Those creatures are played by Taegen Yardley, Emily Friedrichsen and Maxwell Lorber-Lew, respectively — some of the production's oldest youth.

In the next scene, the singers and the animals convince some 30 more children, from the ensemble and a community chorus, to skip school and help Pepicek and Aninku sing for money. That entails hounding Brundibár out of town. The cast makes frequent and fun use of a path between the chairs, at one point barreling en masse through the audience led by a shouting Kochalka, who is positively in his element.

Kochalka said in a phone call that, while backstage at rehearsals, he occasionally became "teary-eyed" thinking about the children who performed in the original productions. (Their powerfully sung finale can be viewed on YouTube.) Yet those children must have felt — if only for the duration of the performances — something similar to what audiences of this local production surely feel: a sense of exhilaration and brief triumph over oppressors.

The original print version of this article was headlined "Children's Crusade"