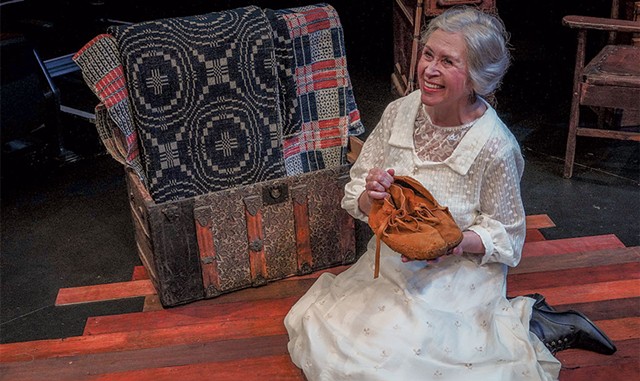 When a person achieves legendary status, they inevitably lose control of their own story. Their life and achievements become the partial property of their adoring public. Living legends have big questions to grapple with: How much am I willing to give up? What will it take for me to reclaim what I've lost?

In Vermont playwright Jeanne Beckwith's new work, Both Eyes Open: The Annie Oakley Story, the titular character takes a shot at setting the record straight about her life and achievements as a markswoman as she rose to international prestige. A rags-to-riches, self-made woman with impeccable aim and a charming persona, Oakley (Maura O'Brien) gazes back at her life, homing in on the turning points and chance encounters that shaped her storied career.

Oakley is the only character to appear onstage, recounting her tales to an unseen Will Rogers, another celebrity entertainer whose career peaked at the transition from the 19th century to the 20th. Based on an actual encounter between the two in 1926, the one-person play gives the audience a fly-on-the-wall opportunity to hear the superstar's unfiltered remembrances.

Oakley was born in 1860 into a Quaker family and endured an early life filled with struggle, including years spent essentially in indentured servitude to an abusive couple to whom she refers only as "the wolves." Hardened but not broken, the future luminary grew up with a rifle in her hand, because "knowing how to shoot meant survival," she tells Rogers.

Continuing her narrative, Oakley introduces the audience to Irish "shootist" Frank Butler, whom she saw as the ticket out of her one-horse Ohio town. After besting him in a shooting contest, she married him. Together, the two became performers, dazzling crowds with their precision. They eventually joined Buffalo Bill's Wild West show and traveled the U.S. and Europe.

Oakley spins yarns for approximately 90 minutes. She talks about her friendships with "Buffalo Bill" Cody and Sitting Bull, the Hunkpapa Lakota leader who also performed in Cody's show. She recalls hobnobbing with dignitaries and royalty, including Queen Victoria, and muses on rivals such as Lillian Smith, a younger upstart who joined Cody's show and, according to Oakley, stole some of her thunder.

Near the end of her account, Oakley digs into her messy feud with newspaper magnate William Randolph Hearst. The mogul tarnished her reputation by falsely reporting that Oakley had been caught stealing — and fiending for cocaine. Though she paid far more in legal fees than she won in damages, she proudly declared victory in all but one of the many lawsuits she brought against Hearst.

Oakley died in 1926, roughly six months after her encounter with Rogers. At the end of the show, the sharpshooter ponders death and the hereafter. She seems ready for whatever comes next, having lived life on her own terms even though it often meant being the "exact opposite of American womanhood."

Beckwith wrote the play with O'Brien in mind, and, reciting her words, the actor embodies Oakley with care and sass. Prickly one minute and silky the next, she imbues the character with vitality. Her words land with gentle humor, eliciting many chuckles between the show's more serious moments.

One-person plays are tricky to pull off, but director Kathleen Keenan, also Lost Nation's long-serving producing artistic director, uses the talents of her production team to pull off an engaging watch despite the dearth of action. Beyond the production's obvious cohesion, Keenan's efforts manifest themselves in O'Brien's metered consideration of her words and her strategic navigation of the set.

Oakley's home is cluttered with ephemera, a tantalizing collection of items arrayed by scenic designer Kim A. Bent and properties/set dressing designers Laura Gist and Ann Harvey. As someone who loves things, stuff and junk, I had to restrain myself from jumping out of my seat to paw through the markswoman's heaped treasures.

Lighting designer Samuel J. Biondolillo creates a rig that Keenan employs with a keen sense of detail: subtle greens as Oakley reminisces about connecting with nature in her youth; a slight dim as she describes her father's death from pneumonia; a serene blue shift as Oakley and Butler traverse the Atlantic.

At its core, Both Eyes Open is about staying true to oneself in changing times. Though she was never a suffragette, Oakley talks about her experiences with activism and her commitment to teaching women her trade.

She also discusses a transformation in how people consumed entertainment — namely, the move from live performance to cinema. Oakley and other celebrities of the era lived in one of the most transitional moments of human culture. Modernity meant losing some of the grandeur and spectacle of live entertainment, as moving pictures flattened the three-dimensional experience of watching people perform. Oakley didn't know it at the time, but she was most likely one of the last greats to make their name exclusively through unfiltered connection with an audience.

Both Eyes Open is full of quick wit and bon mots. Early on, Oakley clarifies that she never closed one eye when taking aim, as many people assumed any shooter worth their salt would do.

"If you can see with one eye, wouldn't you see better with two?" she asks.

The statement exemplifies her no-nonsense approach to life. Oakley was a straight shooter (pun intended) who, in Keenan and Beckwith's vision, fought to be herself until the end of her life. Fame and success meant far less to her than staying true to herself and retaining as much control over her legacy as she could.