Noël Coward wrote Blithe Spirit in six days while on holiday, calling it an "improbable farce." It is that, but its underlying elegance requires the characters to stay poised as the farcical elements attempt to derail them. Armed only with good posture and ready wit, they must withstand the haunting of a house and the potential collapse of what Coward considers the flimsiest of structures, a marriage.

Socialite and popular novelist Charles Condomine invites the dotty clairvoyant Madame Arcati to conduct a séance at his house, in hopes of picking up ideas for his next book. She unwittingly conjures up the ghost of Charles' first wife, Elvira, whom only Charles can see. And Elvira isn't budging; she takes up residence, wishing the décor hadn't changed and that she could still enjoy all the pleasures of life.

When the temperamental Elvira tries to disrupt Charles' marriage to Ruth, his second wife, the husband and his wives past and present find new ways to woo and wound each other. Many scenes take advantage of Ruth's inability to see or hear Elvira, with Charles taking liberties as translator and shifting his alliances freely in what amounts to a spectral love triangle.

In Northern Stage's production, a brisk tempo and the assured precision of skilled actors get the conceit off the ground easily, and once aloft, this comedy simply glides. Coward's wit endures, nearly 75 years after the play's premiere in London during the bombings of World War II. It was a diversion in a grim time then, but remains a silky joy.

Director Lillian King, working with a wide and well-appointed set, moves the actors so gracefully that their poise is always uppermost. This allows for a few nice moments when equilibrium is ruptured: Charles briefly darts into hiding behind the divan on first seeing the ghost of Elvira, and Ruth sneaks a cigarette when she's left alone to worry about besting her ethereal rival. But the norm is stylish, complacent movement, always pretty as a picture.

King and the actors construct smart but unchanging characterizations of each role. Madame Arcati (an effective Amelia White) is ever the eager, curious spiritualist; no matter what the setback, she remains happy and hopeful. She moves a bit like a large, friendly dog, and even roams the room sniffing for the telltale scent of ectoplasm. Without showboating, White displays Arcati's eccentricities like a genial grandmother handing round grandkid snapshots.

As Charles, Sam Gregory is the picture of cheer and complaisance. He seems just as serene with one wife, two or none. Gregory brings the lithe step of Fred Astaire to his portrayal, and his lovely full-body recoil on each morsel of bad news is beautiful, especially paired with the prompt, adorable recovery that pulls him upright again. With twinkling eyes beneath brows arched in mild perplexity, Gregory knows just how to convey comic urgency while retaining all his character's breeding. 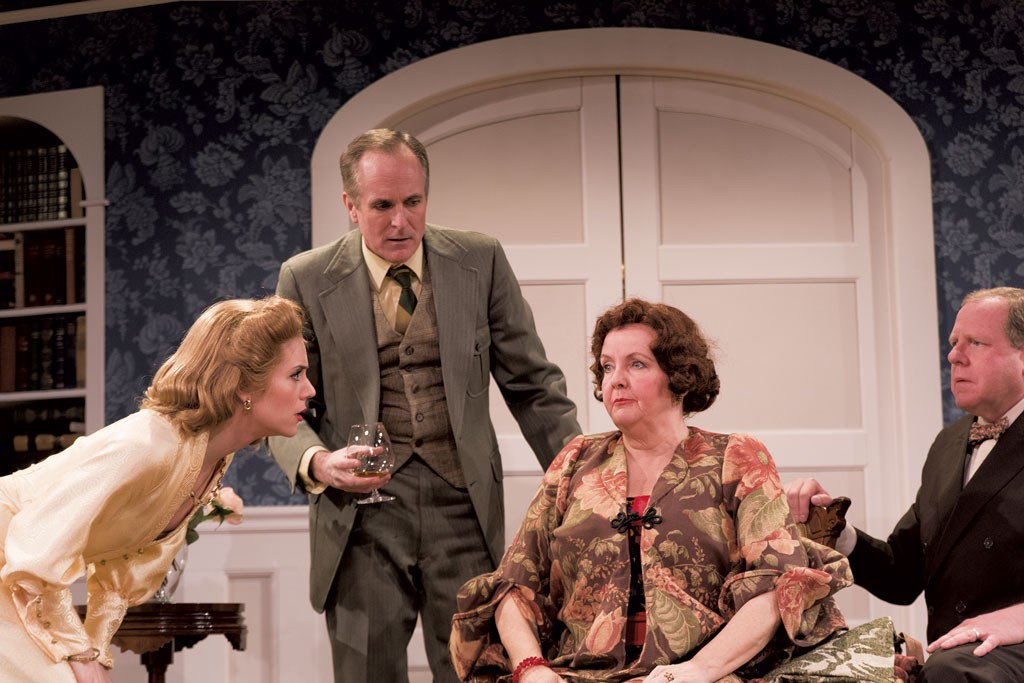 Alexis Hyatt gives Ruth a mannered comic presence that underscores the laughs sharply, sometimes at the expense of making her slightly brittle. Ruth seems always "on," bright to the point of harshness. It's a solid approach that seizes every joke, but it doesn't allow Ruth to experience the subtle changes in the story, as her interests conflict or align with Charles'. Hyatt shows Ruth growing rattled, letting her stare with wide-eyed anxiety, but ultimately she takes Ruth's role as straight man so seriously that the character becomes a bit steely.

The decision to make Elvira (Jenni Putney) something of a pouting brat is potentially a clever way to underscore the youth of Charles' first wife, now dead 11 years and fixed in her late twenties while Ruth and Charles have reached middle age. Making her young is one thing, but letting her become intolerably sulky is another. The comedy nearly compensates, but in the end Charles wouldn't mourn a wife this shrewish, gorgeous or not. Putney has an impressive ease on stage, and it's fun to watch her make an unseen ghost take over a room, but her bow-lipped, little-girl petulance grows stale.

Rachel Brawley's physical comedy as the maid earned plenty of laughs from Friday's preview audience. The bits King devised for this poorly trained servant don't always make sufficient sense; her difficulty handling certain objects is too stylized to be human. But Brawley's engaging energy is charming.

As séance guests and neighbors the Bradmans, Kay Morton and Mike Backman do credit to their smaller roles. Morton has a fine, buoyant excitement about the séance, and Backman gives Bradman an affable, self-satisfied air.

The stunning set, designed by Jordan Janota, welcomes the audience to a world of genteel elegance. The intricate marquetry floor dazzles, while the richly papered walls are crowned with details like cornices, sconces and recessed bookcases. The layout and furnishings support the action beautifully and provide just the right stuffy perfection to let the comedy of manners bloom.

Costumes by Collette C. Benoit establish the 1941 period, emphasizing a bit of the wartime strain over elegance. Ruth sports trousers, perhaps to suggest the tussle she and Charles are having about who's wearing the pants. Madame Arcati's costume is a bright jumble of patterns with just enough reserve to keep her from being ridiculous. The letdown is the lack of dinner jackets. While Charles clings to normalcy by proclaiming, "I always dress for dinner," he and Bradman never get to in this production.

Blithe Spirit lifted London's wartime mood by mocking death, but its real subjects are marriage and jealousy. Coward punctures each character's composure and interweaves three-part conversations that become surrealistic collages as Elvira rants, Charles snaps back and Ruth assumes his comments are directed at her. Setting loose a character someone else on stage can't see allows Coward to build a ziggurat of misunderstandings that rises higher and higher. The laughs keep coming, and this polished production keeps Coward's wit shining bright.