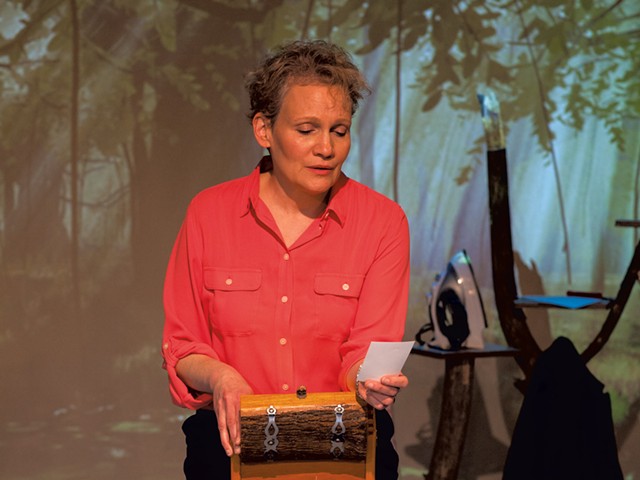 In Blackberry Winter, playwright Steve Yockey subverts the artistic dictum "show, don't tell." Showing isn't any more powerful than a character with a strong need to tell, and Yockey taps that drive in creating Vivienne, a fortysomething baker whose mother is descending through dementia. Vivienne speaks to make sense of her mother's decline, and of her own reactions to it. The play explores her struggle to be honest with herself, and, in Vermont Stage's production, Karen Lefkoe's riveting performance invites audiences to connect with a resolute and moving character.

Vivienne addresses the audience with the deadpan humor of the self-aware as she talks about Rosemary, her mother. Rosemary has Alzheimer's and is getting worse. "Of course it's getting worse," Vivienne says. "What a stupid thing to say. That's all it can do."

Vivienne shares the stage with two mythic animals of her own imagination, which become additional manifestations of her thoughts. The animals speak occasionally, but the majority of the story is told in monologue. Vivienne addresses the animals and the audience, and the animals occasionally react to her. Yockey's adroit script and Lefkoe's gentle manner give the audience every reason to trust Vivienne. Besides, any woman with a killer coconut cake recipe isn't going to lie to us, right? Or to herself.

Vivienne's impulse to reveal her feelings drives this story and this character. The casual, passive heroism of every caregiver begins with having no choice. Vivienne's unceasing smile and civility are her armor. She can pretend all she likes to the world, but she won't deceive herself. Acknowledging the grim topic of Alzheimer's, Vivienne tells the audience we're free to go and she won't be offended. "More accurately, you won't be able to tell I'm offended because this smile ... is made of granite."

The subject matter of Blackberry Winter is serious, yet the tone is far from bleak. Yockey doesn't prettify Alzheimer's, nor does he bludgeon the viewer into misery. Instead, he shows the emotional reserves needed to cope with the disease in a loved one, and lets us laugh, too.

The setting is an abstract world. A row of three rustic stools stands in front of a tidy set of tree limbs, mounted vertically and furnished with little platforms that hold objects: a piggy bank, two balloons, scissors and other items. These are props for the story and are always on view, as if to prove that Vivienne has no tricks up her sleeve. A flat white back wall reflects light with an artificial, museum-like quality. It's an antiseptic display of common and uninteresting objects.

Artifice floods every crevice of the play's presentation, but this only creates a vacuum in which Vivienne's bluntness and humanity can shine. Yockey gives her a craving for metaphor, and so she fashions what she calls a creation myth for Alzheimer's. Vivienne's parable plays out through verses the animals speak on stage and is reinforced by animation projected on the back white wall. White Egret strives to protect memory, while Grey Mole's incessant digging destroys it.

Director Jordan Gullikson stitches the ensemble together to make a coherent whole of colloquial monologue, symbolic props, stylized animals reciting a verse play, and animation that operates like illustrations in a children's book. He excels at distilling the story into moments when actors, and audience, can pause to take in a discovery. The production unfolds with a rhythmic, gliding pace that Gullikson accents with moments of stillness.

Lefkoe takes such easy, gentle command of the audience that it's possible to mistake her offhand naturalism for a simple performance. She spans several octaves here, winning over viewers with self-deprecating humor and then showing Vivienne battling herself to remain honest. Throughout, she holds back any trace of rage or sorrow. The bedrock of her performance shows the cost her character pays to maintain such composure. And at every turn, Lefkoe brings to life Vivienne's courage to carry on.

Sarah Mell uses gorgeous physicality to animate White Egret. Her eager, dancing egret moves with the same halt-and-flow rhythm of a bird that's alert to the world; she pauses to swivel her head and train her gaze upon something that, after a beat, registers as a source of joy, curiosity or worry. White Egret supplies the play's entire ration of optimism, and Mell's smile is deep enough to give hope an anchor. White Egret moves impulsively and seems always to be struggling to please — or even save — Vivienne.

As Grey Mole, Nicholas Caycedo spends the play with a thick rope binding his upper arms snug to his torso and a blindfold he tugs on and off his eyes by bending his head to his hands. Caycedo gives him a calm demeanor; his only interest is slow and steady digging, not frantic tunneling. The mole is stuck personifying the evil of Alzheimer's, but Gullikson and Caycedo resist projecting a moral overtone by emphasizing animal innocence. The only trouble is, Yockey's construction leaves Caycedo with little to do and no chance to balance White Egret, who's busy radiating human emotion.

The uncredited animation is cutesy — pretty much Disney's big-eyed Bambi without the copyright infringement. It's plausible that Vivienne's personal aesthetic might be sappy enough to give the mole an underground bed, nightstand and quilt, but that doesn't make the mawkish projected images any less distracting. But the background projections work wonderfully when limited to forest scenes that go gray as an echo of Rosemary's failing memory.

The arc of the play is downward, but Vivienne grows stronger with each step. What she's facing takes courage, and it's ennobling to watch her prepare, without flinching, for all that lies ahead.