Theater review: 'As You Like It,' Plainfield Little Theatre 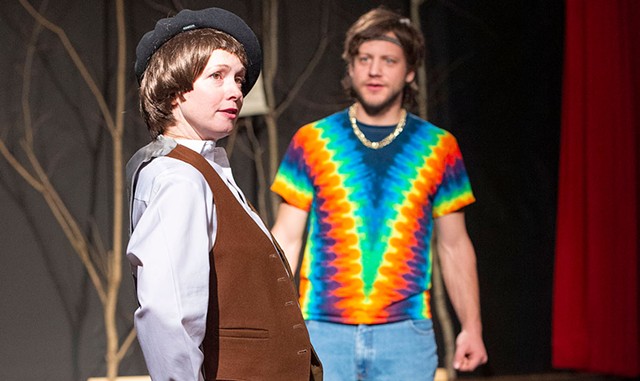 While many of William Shakespeare's most frequently produced plays are set in regal locales — the courts and corridors of power and intrigue — some of his most magical moments take place in the wild. Dark woods are where fairies and spirits romp in such plays as A Midsummer Night's Dream and The Tempest. In the comedy As You Like It, a production of which continues this week at Plainfield Town Hall Opera House, the Forest of Arden is a destination for the banished. Although magical beings are absent from this realm, the most potent magic of all still rules there: love.

Produced by Plainfield Little Theatre and directed by Tom Blachly, this lively staging of As You Like It pays loving tribute to the company's own rural setting. In a program note, dramaturge Robbie Harold cites Vermont's back-to-the-land movement of the 1960s as an inspiration for the production's hippie-chic costuming — the handiwork of Carol Rogstad-Meunier. This choice, Harold writes, connects Shakespeare's vision of the "healing powers of nature" with the countercultural rejection of "mainstream society and its consumerist, militaristic values, its hungers for status and power."

Unlike Vermont's back-to-the-landers, few of the characters in remote Arden are there by choice. Duke Frederick (Carl Etnier), having deposed and banished his brother, Duke Senior (Clarke Jordan), now exiles his niece, Rosalind (Sorsha Anderson), to Arden. Meanwhile, Orlando (Richard Littauer), son of the late Sir Rowland de Boys, finds himself locked in bitter sibling rivalry with his brother Oliver (Jesse Clayton). He flees to Arden after hearing that Oliver is planning to burn down his house.

Arden is no one's happy place — not exactly Woodstock (the music festival or the town). Still, the principal characters' survival, redemption and connection all depend on their goodwill and peace-loving nature.

Some Shakespeare productions use an anachronistic setting to illuminate the durability of the plays' themes over time or to testify to the Bard's preternatural vision of the human condition. Other directors simply hope to offer contemporary audiences easier access — through familiar costumes and sets — to Elizabethan-era culture. In the Little Theatre production of As You Like It, the costumes are the only such contemporizing elements. The production has no set fixtures save for a bench at downstage center and a row of trees lining the upstage wall.

Characters wear the production's only notable adornments, and that choice neither amplifies the persistent relevance of Shakespeare's work nor draws clear parallels between the play's era and rural Vermont of yesteryear. The tie-dye, headbands and peasant skirts, while a touch distracting, mainly serve to add welcome color to this spare production.

The dash of gaiety was especially welcome on a winter night that called to mind The Tempest. (If Shakespeare had lived to see the internal combustion engine, he surely would've dramatized the rigors of driving in freezing rain.) But the production has appeal beyond its love beads and peace-sign pendants. The uniformly strong acting outshines even the grooviest getup.

The cast is strongest where the play needs it most: its lead roles. Playing Rosalind, Anderson shows laudable emotional range. She is convincingly besotted as she pines for Orlando. Her clear affection for cousin Celia (Pollaidh Major), with whom she has traveled to Arden, gives the two of them vital confidante chemistry. When Rosalind takes the male guise of Ganymede to test Orlando's love for her, she shifts to sternness, her fair appearance doing nothing to mute her ferocity.

Anderson's performance sets up a compelling contrast with the object of her affection. Of the entire cast, Littauer's Orlando wears the tie-dye the most convincingly. A paragon of mellowness, he is the one character who could credibly occupy both Elizabethan England and Vermont's '60s-era Tofu Belt. While he is centered almost to the point of being blissed-out, Anderson's Rosalind is more volatile. But both performances exude desire, and the actors demonstrate core confidence in their choices.

Shakespeare's language can create energy of its own, dazzling an audience with clever turns of phrase and penetrating insights. A cast that embodies that language with nuance and sensitivity invites a full appreciation of the work. In part owing to its minimalist production design, the Little Theatre's As You Like It makes plenty of room for Shakespeare's verbal gifts. And the play's supporting cast delivers them as skillfully, if not as prominently, as the lead actors.

Among the more notable turns is Major's portrayal of Celia, Duke Frederick's daughter. A deft wing-woman to Rosalind, Celia is, by turns, mirthfully complicit in her friend's plot to win Orlando's heart and gently concerned by some of Rosalind's tactics. Playing Jaques, one of Duke Senior's melancholy aides — the speaker of the famous "All the world's a stage" monologue — David Klein tinges the character's jaundiced worldview with enough curmudgeonly charm to maintain an upbeat mood.

Matthew Grant Winston plays the trickster Touchstone, a jester in Duke Frederick's court, with unfettered impishness. His physicality goes over the top here and there, but Winston brings solid acting chops to the play's broadest comic role. Other light touches, such as Jessica Della Pepa's ukulele numbers in the role of Amiens, one of Duke Senior's entourage, add buoyancy to the production.

As You Like It might not be Shakespeare's profoundest or most whimsical work. But its dramatic commentary on rivalry and love is no less resonant than that of his other plays. Local audiences may particularly relate to the notion that wild spaces offer sanctuary from conflict while fostering affection. As a theatrical world within the world, the Little Theatre production offers an inviting haven for audiences seeking warmth and light on a cold, dark winter's eve.

The original print version of this article was headlined "Where the Wild Things Art | Theater review: As You Like It, Plainfield Little Theatre"