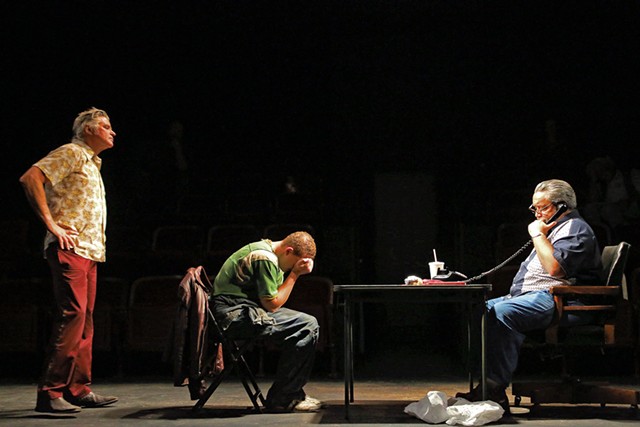 Live theater is a new experiment each night. The actors are the primary variable, but the collective mood of an audience asserts a little gravitational pull that the cast doesn't experience until the seats are filled. At Dorset Theatre Festival's production of David Mamet's American Buffalo, some of those seats are onstage. In Thursday's preview, viewers in the house and on the stage responded so strongly to the play's humor that they may have missed its darker notes.

Mamet builds plenty of bleak humor into his hard-hitting 1975 play — written during a recession — but it's the depiction of lost American dreams and marginalized men that resonates strongest. American Buffalo opened to immediate acclaim, winning the 1975 Obie Award for best new play in its showcase premiere and the 1977 New York Drama Critics' Circle Award for best American play when it moved to Broadway.

Director John Gould Rubin has a brilliant cast to make the most of it: Broadway and film star (and Vermont resident) Treat Williams, actor and Pulitzer Prize-winning playwright Stephen Adly Guirgis, and newcomer Oliver Palmer in his regional debut. Rubin has developed them into a tight ensemble, and they render Mamet's characters with extraordinary freshness and power. But in the preview, the story was softened to a pleasant, comic tale. Did the audience's laughter do that, or did the director and actors intend it?

Life is filled with bit players, and, in American Buffalo, Mamet introduces three losers who see small-time crime as an aspirational goal. But even that may be dreaming too big for Donny, the owner of a junk shop; Bobby, a former junkie and Donny's gofer; and a low-grade hustler nicknamed Teach.

All the action takes place on a Friday in Donny's shop near Chicago. Donny plans a burglary for Bobby to execute, but Teach persuades Donny that Bobby is too inexperienced and nominates himself for the job — and a cut of the proceeds. The victim is a customer who bought a buffalo nickel from Donny the previous week.

The details of the plot are intentionally unclear, as Mamet's characters infer more than they reveal. Their criminal pedigrees are ambiguous. The ill-conceived burglary hinges on an unseen friend, Fletch, who may or may not be an ace criminal. Even exactly what they hope to steal is never explicit.

The essence of the play is talk that always pulls back before revealing too much. The characters guard their intentions by adding a "You know?" before finishing a thought. And, in this world, the others do know or at least won't admit that they don't. Mamet's theme is the use of "business" as an excuse for moral limitations, and the story turns on friendships that fray into betrayal or withstand a test of loyalty.

The virtuoso realism of Mamet's dialogue is justly praised, but the playwright does more than make an eerily faithful record of diction. His accuracy extends to rhythm and verbal hesitation, and what he writes is a record of thoughts forming. As the characters stumble, pause or overlap, their needs chafe at the limitations of speech. American Buffalo concentrates on verbal manipulation — the apology that seeks control, the profession of trustworthiness that conceals self-interest, the fear so stark it must be demeaned instead of articulated.

Rubin chooses to discard the tangible details of the junk shop and sets the show in a timeless limbo. A flimsy card table, a few chairs and some incidental props serve as Donny's store. Unfortunately, stripping away the clutter of a junk shop eliminates the visible chaos of lost dreams. The unvarying lighting leaves the onstage audience dimly in view and never evokes the passage of time, undercutting the anxiety that should mount as the robbery approaches. The focus, instead, is on a place surrounded by a void.

As Teach, Williams takes on the role's operatic verbal demands with a sawtooth rasp to his voice and an unquenchable physical drive. With jaw thrust out in defiance and shaggy hair straggling, Williams stalks around the shop with feral violence simmering beneath his gait even as his words amount to little more than bluster. That contrast of ego and weakness makes his performance transfixing. With jangly energy that shows something's gotta give, Williams makes all of Teach's choices appear both crazy and inevitable. He masterfully underplays the character's despair.

As Donny, Guirgis commands the junk shop from a battered rolling swivel chair, with telephone in one hand and cup of coffee in the other. Guirgis' performance is exquisitely contained; he moves little but flicks his eyes alertly on Teach or Bobby, then brings his glance to rest in a strong stare. Guirgis portrays Donny's anxiety by showing him strive to bottle it up. He emphasizes Donny's gentle side, and, if the sweet-sour balance is not as tart as a more intense production would require, it's still an arresting portrait.

Palmer captures Bobby by curling his shoulders down and caving in his stomach. He moves with strangled strength, slumping tight against a wall to avoid Teach or twitching with craven nervousness as he strains to earn — and hold — Donny's attention. Life has kicked a stupendous amount of shit out of Bobby, and Palmer lets it register. Palmer's coup is letting Teach and Donny wonder whether he's a desperate minion, a traitor or a fuckup.

Mamet's play can be menacing, but in Thursday's show it was coated with comic sweetness. Perhaps the audience's laughter diluted a cynical tone that may come through in other performances. For all its profanity and scorn, American Buffalo has a hopeful conclusion, but it's best if it sprouts in bitter soil. Mamet's strength is in using ruined, rumpled men to expose the goodness inside all of us.