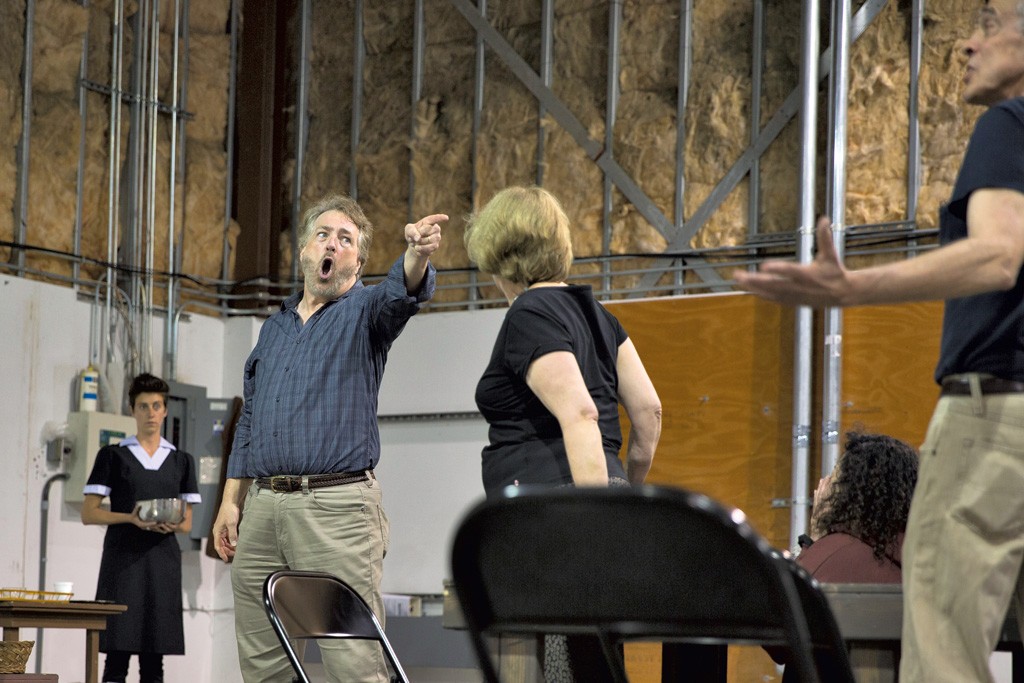 A.R. Gurney's play The Dining Room is not about eating. Rather, the American playwright envisioned a series of overlapping but largely unrelated vignettes in which 18 characters act out small human dramas. When the work premiered in New York in 1982, the term "first world problem" had not yet become a meme, but WASP — white Anglo-Saxon Protestant — was in vogue. Both terms suggest the economic class, and social conventions, Gurney had in mind.

His characters all have another thing in common: the dining room furniture. This provides the play's thematic underpinning and its exceedingly simple set.

Both the casting and the economical staging needs made The Dining Room appealing for this year's Bake Off, says Cristina Alicea. The producing artistic director of Vermont Stage Company conceived of the Bake Off four years ago as a concluding production to its regular season.

The idea is this: Take a play, divide it into three sections, hire three directors and let each of them choose their own casts. What the audience sees, then, is a tripartite work performed by three completely different sets of actors. Alicea thought of this as a way to demonstrate what directors do — that is, to show how directorial choices can shape any given play. To enhance that understanding, each night of a Bake Off production is followed by a Q&A with its directors.

Of Gurney's play Alicea says, "The Bake Off has very specific needs that must be met, and The Dining Room really meets that. There is one setting but different time periods and lots of characters, each of them very different. It's also fun," she adds. "I've established, too, that I want to pick a play that's going to be fun for the audience."

While in a normal production of The Dining Room six actors typically play three roles each, the Bake Off iteration features 18 actors.

If that sounds hard to follow, director John Nagle has a different take. "Every single vignette is a completely different family. The audience won't have to follow the track of any character," he says. "In one sense, it's like watching three one-acts."

The director of the third and final section, Nagle — who with his wife, Jena Necrason, founded the Vermont Shakespeare Company — notes that in each section, "You have to create your full characters, and the arc of the scene. It's important to treat each one fully."

And that's why no director has any more responsibility than the other two to help audiences "get" the play. Directing the first section, Jamien Lundy Forrest, who is also VSC's general manager, says she thinks the biggest challenge is "finding the right pace of the show — but it's a challenge I expected. It's important the cues are sent in the right way in the vignettes," she says.

Sandwiched in the middle, director Andrew Butterfield has made some "bold choices" (he's "taking some inspiration from 'The Twilight Zone,'" he confides) that will easily distinguish his section from the others. Does he feel any extra pressure because his actors need to "segue" twice?

"I'm approaching my section as a stand-alone play within a play," he says. "The arc of the play will still exist regardless of what I decide to do.

"I didn't choose this play," Butterfield adds. "But I believe it has some contemporary relevance. Our country is still led by old, white, rich, Christian men. The WASPs in this play represent that."

All three directors, and Alicea, say what they're most looking forward to at The Dining Room — aside from seeing how their colleagues interpret the play — is the aftermath. That is, the audience response. "I think there will be a lot of questions," says Butterfield. He adds: I'm also looking forward to just seeing my cast out there. They're doing awesome work."

The original print version of this article was headlined "Bake Off Sets the Stage, and the Table, With The Dining Room"