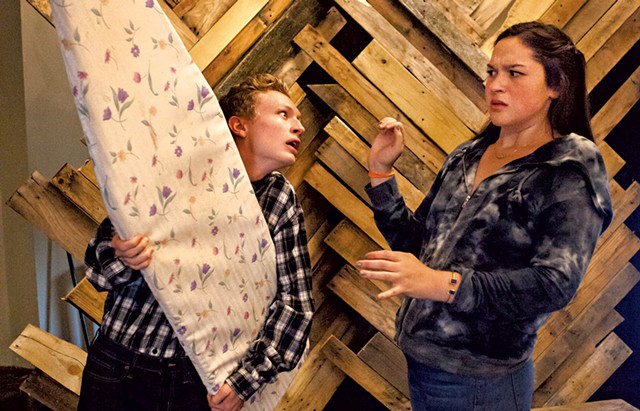 During the summer, theater in Vermont heats up in a big way. Summer stock is a given, with seasonal series or single shows around the state bringing everything from frothy musicals to Shakespearean tragedy. As it happens, playwrights are also testing the waters for new works with staged readings, comedians are flinging funny stuff left and right, and some Burlington-area thespians are gearing up for the return of the Vermont Fringe Festival. Here's a small sampling of theater news you can use. (Also see Dan Bolles' preview of the Green Mountain Comedy Festival.)

Stowe Theatre Guild is trying something new: It's presenting the first show directed, produced and performed by a young-adult cast. Granted, they're young adults who have spent most of their lives doing musical theater in Stowe. For his directorial debut, Owen Leavey, who is now studying musical theater at CAP21 conservatory in New York, approached the Guild about doing a summer production of John Cariani's Almost, Maine with community members and his friends. Some of those friends have moved on to college or jobs, but all were enthusiastic, says producer Devin Kiernan, about returning to their old stomping grounds to work together.

Kiernan, who is now studying theater and communications at Elon University, is psyched: "Owen said that he really wanted to produce this particular show, and I was really excited to get back to Stowe," she says. "It's so nice to see the same faces all the time again. It's a great community, with people who are really passionate and willing to put so much time into it. It's like a family outside of your own family."

A tale of romance and broken hearts set in the small town of Almost, this production will feature young performers whose next stop could well be Broadway.

Proud and Out Loud

The Vermont Pride Theater Summer Festival in Randolph is marking its sixth year, and two of its four plays are East Coast premieres. The works explore issues of gender identity, gender therapy, and the balance of public and private life.

Raggedy And, written by David Valdes Greenwood, was originally developed by LeapFest at Stage Left Theatre in Chicago. Billed as an "ultramodern comedy of manners," it tells a story of the first trans poet selected to read at the inauguration of the country's first female president.

The world premiere of Raggedy And happened at Chicago's Pride Films & Plays last spring, but a more developed production will open the fest in Randolph, according to Valdes Greenwood. In an email interview, he says his play is "focused on some of the pressing questions of our time, for all LGBTQ people and all citizens: Who gets to define you? What do you owe yourself and others when it comes to identity? What does it mean to be true to yourself?"

The second premiere production at Pride, Mama's Girls, presents a family's struggles with a preteen's urgent request to begin gender therapy. This will be the play's second staging, after a world premiere at SNAP! Productions in Omaha, Neb.

"Plays presented at Pride Festival are essential because of the obvious and heartbreaking tragedies we've experienced in our country regarding our gay and transgender communities," says playwright Marilynn Barner Anselmi, checking in from North Carolina. "Theater has the unique opportunity and responsibility to open up essential discussions regarding equality and respect, in ways which allow and welcome others into these lives and experiences."

Curator Sharon Rives says the Pride Festival is more important than ever: "We need it [in Randolph] more than other parts of the state. Every area in Vermont has its own particular concerns and issues, and acceptance of LGBTQ people has been more prevalent," she says. "But we need to take this opportunity, when gender is at the forefront of our national conversation, to create a vehicle to broaden minds and to enhance understanding. To break down barriers instead of building them up."

Toward that end, postshow "talkbacks" will give audiences a chance to discuss issues presented in the plays.

A New Role for Off Center,and Fringe! 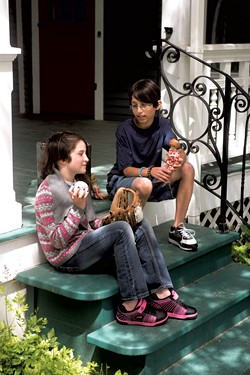 Local theater artists, heads up: Participants are wanted for the Vermont Fringe Festival in October. The event took a yearlong hiatus, but Burlington's Off Center for the Dramatic Arts is resurrecting it. Great fun for audiences, the fest allows performers to take new chances and let it rip. Whatever "it" is. All genres are welcome: solos, plays, collaborations, cabaret, puppets and ... robots?

The Fringe Festival will last four days and feature up to 20 different artists in half-hour time slots. The eventual goal is for theater artists to take over Burlington with performances around the clock in downtown venues, making the Fringe as prolific as the Burlington Discover Jazz Festival. So let's get started.

Meantime, Off Center is restructuring itself — as a community collective. The small black-box venue, which many believe is crucial to the sustained growth of creative work in Burlington, has a goal of becoming more efficient and gaining more community buy-in, while keeping rental prices low for artists. "Off Center fills a niche in Burlington — it's important that we're here," declares cofounder and president Paul Schnabel. "Part of the reason that we're able to give artists such a valuable resource to experiment with their work is that we don't have the kind of oversight other venues have — no paid staff, no artistic directors. So we're trying something somewhat unique, and we will be turning to the community to help."

Want to participate in the Vermont Fringe Festival? Email a short proposal with the subject heading "Fringe Festival" to dafschein@gmail.com by Friday, July 22. To get involved in planning the Off Center collective, email theoffcenter@gmail.com.

The original print version of this article was headlined "Summer Stages: What's at Play?"