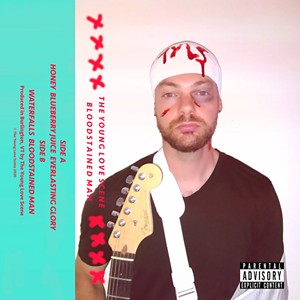 On the cover of Bloodstained Man, the debut EP of Burlington rock singer-songwriter Gordon Goldsmith's project the Young Love Scene, the artist stands as if posing for a mug shot. With cuts, contusions and his left arm bound in a sling, Goldsmith appears to have survived a nasty altercation and subsequently been brought into custody. But what was his crime? Listening through the five-track collection, one might guess loving too hard.

Emotions run deep on Bloodstained Man, which was released just a couple of weeks before the end of 2020. Each song frames its creator as irrevocably demolished by love, pinned under a massive load of feelings. His lyrics are spare, with the complexities of real-life relationships boiled down to concentrated, near-elemental forms.

Goldsmith makes no attempt to obfuscate his love of '90s alternative rock, as heard in his driving guitar riffs and blasé, almost reticent lyrical drawl. Much like the way Burlington's Edward Jahn (aka Love and Japan) reimagined the sounds of '80s post-punk and new wave for his 2020 EP Tears for Vanishing Ways, Goldsmith commands grunge and its descendant sub-sub-genres with clear-eyed strength and vision. You know, metaphorically clear-eyed. It must be hard for him to literally see with tears presumably gushing down his face as he sings these sweet, sad songs.

He name-checks the Smashing Pumpkins and Weezer on his Bandcamp page. Silverchair and Bush are appropriate comparisons, as well. Bloodstained Man is suitably hefty and solid for the style to which it aspires, and it's an invigorating listen despite its often-gloomy tone.

Except for a couple of vocal assists from singer-songwriter Jesse Taylor, Goldsmith is the sole creator of everything heard on the album, which he recorded at home. He ushers listeners in with fluid drums on opener "Honey," followed by a charged riff that curls around his breathy lyrics.

Another sonic time machine, "Blueberry Juice" transports listeners of a certain age back to mid- to late '90s proms, when slow dancing to dour, grungy rock was the norm. An outpouring of angst soars on cascades of cymbals, jacking up the drama in the song's lyrics. "Aphrodite's all in my veins and shit," Goldsmith sings in a song that seems to draw a parallel between romantic obsession and substance addiction.

"Everlasting Glory" somewhat departs from the way-back playback vibes for a more contemporary sound. A little bit shoegaze, a little bit dream-pop, the track showcases a brief transformation from alienation to wonderment.

"Waterfalls" and the closing title track escalate the EP's intensity, though Goldsmith eases the latter down bit by bit as his guitar fades out over the final two minutes. It lands the EP with tenderness, a fitting end to the passionate music that precedes it.

Bloodstained Man is available at theyounglovescene.bandcamp.com.