The Woodstocker B&B Creates a Warm Welcome for Pampered Getaways 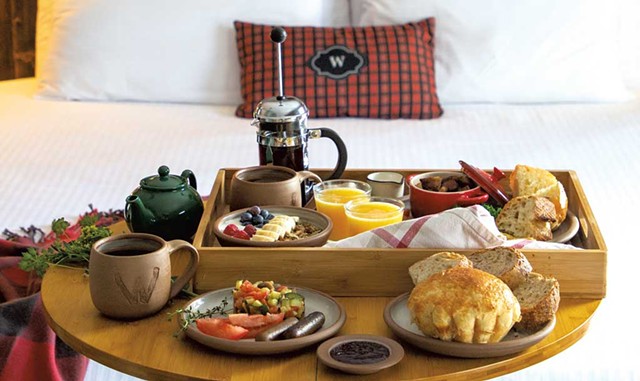 If Isabelle Chicoine and Karim Houry had been good at math, they never would have fallen in love as teenagers, broken up, then reconnected 25 years later to marry and become the co-owners of a cozy Woodstock bed-and-breakfast that serves freshly baked brioche every morning.

When they first met, Houry lived in the Paris area and Chicoine in the south of France. Their parents had enrolled the high schoolers in a summer camp to help "people who were struggling in math," Chicoine explained.

The camp was in Auvergne, a region in south-central France that, she added, "is actually pretty similar to Vermont. It has that country, big hills, low mountains kind of feel."

The sweethearts maintained a long-distance romance for about four years before they split up. "We were both each other's first love," Houry reflected. "Maybe it was too much for us so young."

Years passed, and each married someone else. Chicoine had four children. By 2009, she and Houry had landed in the New York City metropolitan area and were going through divorces.

"We just kind of looked for each other and found each other," Chicoine said. "The stars were aligned." If it had been five years earlier, she said, the timing would have been wrong.

Their first get-together, Houry said, "was like meeting a brand-new person that is so familiar." Chicoine likened it to the easy reconnection between old friends, no matter how many years have passed. "You can just pick up again," she said.

Houry and Chicoine, now 57 and 55, respectively, eventually married in 2017. But as they became reacquainted, their desire to make up for lost time was inhibited by long commutes and busy jobs — his in finance, hers in marketing communications.

"We were working an awful lot and not seeing each other at all," Chicoine said. Plus, each was itching for change. "We had reached a time in our lives where we wanted something else," she said.

The couple was on vacation in Colorado when the concept of buying a bed-and-breakfast first bubbled up. "We left a B&B there, and Karim tells me, 'You know, I could see myself doing that.' And I said, 'You're crazy,'" Chicoine recalled with a laugh.

Gradually, the idea of moving somewhere quieter and working together on their own business gathered momentum. They started looking for a property.

Vermont drew them for its steady flow of tourists. There were personal ties, too: Chicoine's mother is French, but her father grew up in Burlington and she had visited Vermont as a child. The couple had also made several trips to the state when one of Chicoine's daughters attended the University of Vermont.

Exploring options, Chicoine said, "Woodstock really charmed us." The town balanced a country feeling with a bustling village center, she explained — something "you don't find in many places."

The Woodstocker B&B seemed just right for them, too. Dating back to 1830, the property had ample historic appeal and an established reputation — but also room for Chicoine and Houry to put their own stamp on it. The quiet location offered separate owners' living quarters as well as garden space for guests, all just a short walk or bike ride into town.

After an intense two-month renovation, Chicoine and Houry welcomed their first guests in late May 2018. 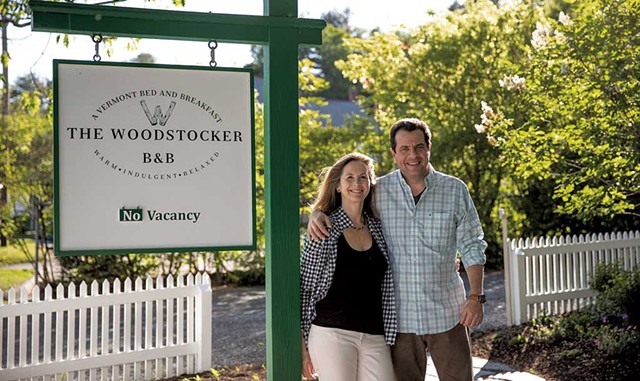 Their Woodstocker blends old-world charm — original wooden floors and rough-hewn structural posts and beams — with modern upgrades, such as infrared saunas in two rooms and a striking translucent red tub in another.

All rooms have king beds, thick terry bathrobes, complimentary slippers and gas fireplaces for cool nights. Bathrooms are stocked with locally crafted soaps and lotions, and guests are greeted with a personalized note, a vase of flowers and maple candies.

If that all sounds a bit romantic, it is. Whether you're in a freshly minted relationship, celebrating a milestone anniversary or magically reconnecting after many years, the Woodstocker caters largely to couples. It's not set up to accommodate children under 16.

The goal is to provide a relaxing, indulgent adult getaway. The couple has nothing against kids, Chicoine explained, but they change the whole atmosphere. "I had four," she said. "I know!"

Each of the nine rooms has its own personality. One boasts a private terrace with Adirondack chairs. Another is decorated with twinkly lights and resembles the interior of a log cabin. A third has a pair of side-by-side clawfoot tubs.

On a late spring overnight, the Finnish heritage of this reporter's husband dictated a room with a sauna. We checked ourselves in following clear instructions, dropped our bags in our first-floor suite and slipped into the sauna to heat up.

We weren't far from home, but many of the Woodstocker's guests hail from around the Northeast. Pre-pandemic, most would have been greeted by the innkeepers, but the flexibility of self-check-in has been a success, and Chicoine and Houry plan to keep it. 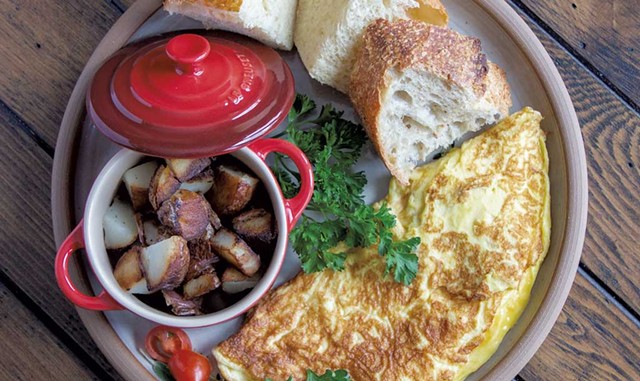 After a restorative sauna, we strolled into the village for a late dinner at Mangalitsa. The excellent farm-to-table restaurant is currently relocating to Peace Field Farm — a move that will bring the farm even closer to the table. There are several other good dining options in town, and the innkeepers are happy to advise.

That night we meandered home through quiet streets under a velvet sky bedazzled with stars and a crescent moon. We crossed the Ottauquechee River on the Mountain Avenue covered bridge and passed a white steepled church with glowing stained-glass windows before arriving "home" to fall into our comfortable, crisp-sheeted bed.

The next morning, we had a seated breakfast in the dining room. Another pandemic adaptation that will stick around is the option to enjoy a full in-room breakfast. Some guests prefer the convivial between-table conversation that percolates along with morning coffee, while others just want to focus on each other, Chicoine observed.

Houry delivered coffee and a basket of pillowy brioche rolls. His wife bakes them fresh daily.

"Brioche is the quintessential French morning bread, next to croissants," she said. "I just thought, if I was going to have a B&B, that's one of the things I wanted to do."

Houry serves breakfast while his wife cooks. They carefully considered the division of labor before jumping into bed-and-breakfast ownership — even taking a blind questionnaire to make sure they were aligned, like a newlywed game of business ownership.

The breakfast options are sourced as locally as possible, with options to meet all dietary considerations. I chose the Vermonter: a generously stuffed Plymouth cheddar cheese omelette with sausage and crisp potatoes served in an adorable mini Dutch oven. My husband stuck with his Scandinavian theme and opted for smoked salmon with scrambled eggs and sautéed zucchini.

In the summer, breakfast is also served on the patio, a favorite afternoon spot for BYOB sipping and grazing on cheese and charcuterie platters, which Chicoine can create with advance notice. She is also happy to pack picnic lunches featuring local bread, cheeses, hardboiled eggs and apples.

Such a picnic would fuel any number of activities the couple recommends to guests: maybe a hike from the Woodstocker through Faulkner Park up Mount Tom to the carriage trails of the Marsh-Billings-Rockefeller National Historical Park, or an electric bike ride toward Pomfret along quiet dirt roads. Area destinations include Billings Farm & Museum, the Rockefeller mansion and the Vermont Institute of Natural Science.

Downtown Woodstock offers plenty of shopping and, from June through October, the Wednesday afternoon Market on the Green, featuring fresh produce, live music, locally made ice cream and crafts. On steamy summer days, Chicoine directs guests to local swimming holes or Silver Lake in Barnard, "a lovely 15-minute drive away."

Sometimes the innkeepers even get to enjoy their own recommendations. Instead of 90 minutes, "My commute is 25 seconds on a bad day — when there's a headwind," Houry said with a laugh. "In the summer, we might hop on a bicycle and go into town for dinner," he said.

It all adds up to more time to spend with the one you love.