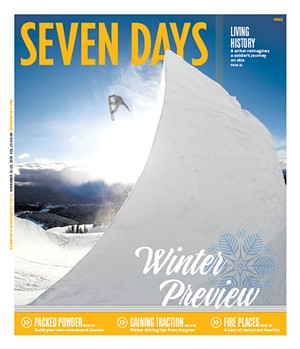 Each November, Seven Days staffers bravely stare into the coming frigid abyss to put together our annual Winter Preview issue. The idea, of course, is to hip our readers to cool new trends in snow sports, food and arts — or to cozy ways to get hygge with it in the chilly season ahead. But, to be honest, it's sometimes a challenge for us to get in an appropriately wintry frame of mind. It's not that we necessarily dread Vermont's long, cold, dark and long (and cold and dark) winters, but c'mon — we just barely finished our Halloween candy.

This year is different. Thanks to an early storm that hit this week and dumped up to a foot of snow on parts of the state, Old Man Winter has clearly beaten us to the punch. You want a 2019-20 Winter Preview? Look out the window.

Judging by the hairy state of local roads the morning after, it's safe to say the snow caught quite a few Vermont drivers by surprise. As our friends at Team O'Neil Rally School in New Hampshire told writer Ken Picard, it's tricky to go from months of summer driving to navigating wintry conditions. The instructors at that school are the folks who train cops, FBI agents and soldiers to drive like James Bond. They won't teach you those skills, but they do offer a winter driving course for civilians, and they passed along helpful tips for staying safe on the roads this winter. (Tip No. 1: Get those snow tires on, like, last week.)

On the other side of the coin, the recent storm undoubtedly delighted the state's legion of powder hounds. Chief among those is Jesse Loomis, the founder of PowderJet Snowboards in southern Vermont. Lately, Loomis has been teaching others to build their own versions of his retro-cool wooden boards.

That sounds like a fun project to us. And, as anyone who has spent a winter in Vermont can tell you, making it through with your sanity intact means finding wholesome things to do. Few know that better than writer Erik Esckilsen, who offers an essay on the backyard skating rink he builds for his kids every year.

Sometimes the best way to embrace winter is to, well, get out and embrace it. That's among the revelations that writer Sam Brakeley had when he set out to approximate the 300-mile midwinter trek of Revolutionary War soldier Henry Knox on cross-country skis for a new book.

We imagine Brakeley might find a kindred spirit in author Leath Tonino, who compiled a list of favorite literary quotes about winter. We'd strongly recommend reading that piece — or anything, really — in the glowing warmth of one of Vermont's many restaurant hearths. Among Tonino's selections is this gem from David Abram's The Spell of the Sensuous: Perception and Language in a More-Than-Human World: "In the dark winter night a story well told may hasten the coming of spring."