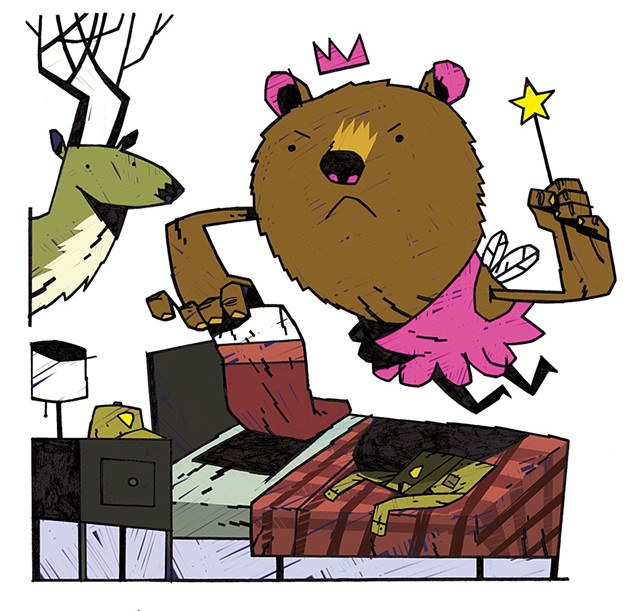 When the chief law enforcement officer at the Vermont Fish & Wildlife Department shot a bear on November 16, 2017, he didn't submit one of the animal's teeth as required by the regulations he is charged with upholding.

Eleven months later, what started with a bear tooth has mushroomed into a much larger controversy within the department. Some of the game wardens who work for Col. Jason Batchelder accuse him of trying to cover up his infraction. Six wardens who spoke to Seven Days said they've grown angry and frustrated that Batchelder has yet to face any consequences.

"The trust of our highest command is fractured and crumbling," said Sgt. Travis Buttle, a warden based in Shaftsbury. "It's extremely difficult to regain that trust."

After months of urging by some wardens, the Vermont Department of Human Resources has launched an investigation into the incident, according to Commissioner Beth Fastiggi, who revealed little else about the probe.

In a brief interview, Batchelder defended himself, saying that he followed proper protocol in addressing his mistake. "I have nothing to hide," he said. He declined to elaborate, saying the department's attorney had told him not to comment during the investigation.

Batchelder was born and raised in the Northeast Kingdom and, after a stint in the U.S. Coast Guard, joined the Fish & Wildlife Department full time in 2004. He rose through the ranks and took over as head of the state's 39 wardens in late 2014.

It was on Batchelder's watch that the department's civilian board passed the rule that would later get him in trouble. The board mandated in 2017 that hunters submit a premolar, the small tooth behind the canines, within 48 hours of killing a black bear. Other states have similar requirements.

A lab in Montana then analyzes the teeth to provide Fish & Wildlife with data about Vermont black bears, according to Forrest Hammond, the agency's black bear project leader. A tooth can reveal the age of the animal, he said, which can help determine the size and health of the population.

During the 2017 hunting season, which ran from early September to mid-November, 622 Vermont hunters killed black bears; 100 — including Batchelder — didn't submit a tooth, as is now required.

According to documents obtained in a public records request, a secretary sent Batchelder a list of the offenders in February 2018. He reviewed the list and sent in his bear tooth in mid-February. He then removed his own name and sent the list to the wardens, who were directed to issue a written or verbal warning to offending hunters in their districts. Because the requirement had been in place for less than a year, the state didn't fine hunters who failed to comply.

Fish & Wildlife Commissioner Louis Porter said he told Batchelder to remove his own name. "I told him that, as far as I was concerned, it was resolved," Porter said.

For months, the discrepancy wasn't revealed. But someone tipped off Brenna Galdenzi, an animal rights activist and president of Protect Our Wildlife, who filed a public records request on June 5 asking for all documents and communications related to "some trouble with bear hunters who did not submit a tooth as per Vermont law."

The department initially gave her just the original list with Batchelder's name, according to emails obtained by Seven Days. It was only when Galdenzi pressed the department's general counsel, Catherine Gjessing, that she received the second list without his name.


In late September, Galdenzi forwarded the records to Seven Days.

They included an email from Batchelder apologizing to his staff. It was dated June 20 — the day before the department sent Galdenzi the documents.

"I'm writing to fill you in on a situation in which I never thought I'd find myself, and to ask for your patience, if not forgiveness," he wrote. "I believe ... that Vermont State Game wardens are the epitome of ethics and lawfulness, and as your chief, I have clearly failed all of you and the public in this arena."

He had removed his name from the list, he explained, "not wanting to cause unnecessary work and worry." Batchelder did not elaborate in the email, but he did announce that Maj. George Scribner, one of his subordinates, had already completed an investigation into the incident.

The probe uncovered no evidence of wrongdoing, according to Porter. But there are no records of the inquiry, and its results were not filed in the internal system the department uses to document violations and investigations, according to Gjessing, the general counsel.

The department's standard operating procedure doesn't dictate how an investigation should be carried out, but the policy does establish the need to "insure public confidence in our ability to self investigate" and in "efficient, fair, and impartial law enforcement."

After sending Galdenzi the documents, the department also issued a press release acknowledging that Batchelder had submitted his tooth after the deadline. While Batchelder did not receive a formal warning about his infraction, the publicity alone meant that "the colonel suffered a penalty that no one else was subject to," Commissioner Porter said in an interview.

The wardens who spoke to Seven Days — some on condition of anonymity — said they were not upset about Batchelder's failure to submit the bear tooth. That was likely an oversight, they agreed. What angers them is that the infraction was hidden, an action they described as unethical and possibly illegal.

They have repeatedly asked for an impartial and transparent investigation, according to Greg Eckhardt, a lieutenant who retired at the end of September after 20 years with the department and who now works part time as a deputy warden.

At a meeting on July 12, four of five lieutenants, including Eckhardt, voted to have the department conduct an outside, independent investigation of the incident. In a "pretty heated" discussion that included Batchelder and Scribner, "we pushed pretty hard," Eckhardt said.

Eckhardt "left with the impression that the chief thought it was a good idea," he said, referring to Batchelder.

Later that month, an internal affairs complaint — unsigned, but saying it was from "many proud Vermont game wardens" — was sent to Rick Gauthier, executive director of the Vermont Criminal Justice Training Council, asking his group to conduct an investigation.

The four-page, single-spaced letter, which Galdenzi shared with Seven Days, accused Batchelder of covering up his failure to submit the tooth and called it "self-serving" and "a breach of integrity that the law enforcement division prides itself on maintaining." The wardens requested an independent investigation "before we slide even further into what appears to be a culture of corruption."

Gauthier said his agency didn't have the authority to conduct an investigation. He requested that two other agencies do the analysis, though neither did, he said. He and Porter declined to identify the agencies.

One warden told Seven Days that frustrations were "growing in volume" among the law enforcement officers. He requested anonymity, fearing repercussion for speaking up about his boss.

"How can we hold ourselves accountable in a different way than how we hold the public accountable?" the warden asked. "That's a piss-poor way of establishing ourselves to the public."

When Batchelder wasn't reprimanded, members of the department went to the press. Seven Days received two anonymous letters that purportedly came from wardens.

This newspaper was able to confirm that a warden authored one of the letters; he said he knew the authors of the other.

"There has been a systemic problem with integrity and transparency at the highest levels of the Vermont Fish and Wildlife Departments Law Enforcement Div.," one letter began.

The wardens went public in the hopes of prodding the department into taking action against Batchelder. The idea was, "If we make a big enough stink, something's going to catch," the anonymous warden said.

Porter said he hadn't seen or heard any complaints except the one sent to Gauthier. "If there are people reaching out anonymously to a newspaper about leadership in the department, obviously I'm concerned about that because I'm the leader in the department," he said.

"I wish they'd come to me," the commissioner added, noting that "there's never been any reprisal" for warden complaints during his four years in the post.

"I think people who are opposed to our mission of hunting, fishing and trapping have used this as a way to raise questions about our management," Porter said, referring to Protect Our Wildlife.

Porter said the Human Resources Department probe began in early October and that the agency would determine what, if any, consequences Batchelder would face.

Porter said he didn't know whether the results would be made public but noted that such investigations typically remain private.

Either way, the damage has already been done, according to some wardens.

"It's a black eye for us. It makes the job more difficult for the field wardens. I think we lose credibility," said Eckhardt, the retired lieutenant.

The public holds wardens to a high standard, he pointed out. "Our word is our bond," he said. "We have to be above reproach."

Correction, November 7, 2018: A previous version of the story inaccurately described the order in which Galdenzi received the emails from the department.