'The White Tiger' Is a Lush, Dark Rags-to-Riches Tale 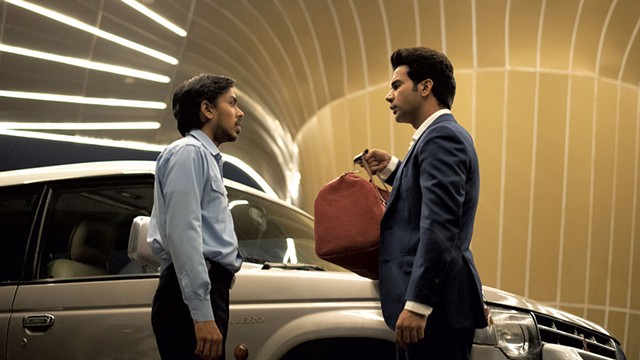 Our streaming entertainment options are overwhelming — and not always easy to sort through. This week, I watched The White Tiger, a Netflix film set in India that mashes up satire, class-conscious underdog story and crime drama with flash and style. Ramin Bahrani (Goodbye Solo, 99 Homes) directed and adapted the screenplay from Aravind Adiga's Man Booker Prize-winning novel. The author and filmmaker have been friends since their student days at Columbia University; their collaboration is an award nominee and a top-10 global hit on the streaming service.

In Bangalore, the "Silicon Valley of India," a young man named Balram Halwai (Adarsh Gourav) writes an email to the Chinese premier, who is visiting the city to learn from its entrepreneurs. Balram presents himself as a shining example of how someone from a poor, low-caste background can succeed in the new economy. As he narrates in voice-over, we see for ourselves how he triumphed over his rural upbringing and truncated education.

In flashbacks, Balram talks his way into the job of chauffeur to Ashok (Rajkummar Rao), son of his town's wealthy landlord. Ashok has recently returned from the U.S. with a glamorous wife, Pinky (Priyanka Chopra Jonas), and the young couple brings Balram to Delhi, where they often treat him more like a buddy or a pet than a servant.

But one night, when a wasted Pinky insists on replacing Balram at the wheel of their luxury SUV, things go very wrong. Having realized just how far servitude will (and won't) get him in life, Balram chooses a new path.

If the narrative framing of The White Tiger has you excited for an Indian version of Goodfellas, you may be disappointed. Bahrani has cited Martin Scorsese's film and Fight Club as stylistic influences, but the movie is less crime epic than character study. The focus is on the complex relationship of master and servant, the invisible lines that keep some people subordinate to others.

Early in the film, Balram uses the metaphor of the "rooster cage" to explain why he and millions of other people accept their fate as exploited servants to the privileged. Likening them to fowls that watch passively as their friends are sent to the stew pot, he asks what happens when someone fights back.

Balram doesn't start out a rebel; begging for a job, he's all obsequious smiles and eagerness to please. But Gourav, in an electric performance, shows us the doubts, the conflicts and eventually the ruthlessness beneath the façade.

Complicating Balram's dawning class consciousness are his fraught relationships with his employers. While the patriarch of Ashok's family (Mahesh Manjrekar) wouldn't be out of place in a mob movie, the movie-star-gorgeous Ashok and Pinky pride themselves on their humane and modern attitudes. They're "soft" antagonists, like the rich family in Parasite. But when push comes to shove, their empathy with the underprivileged crumbles.

A disillusioned Balram derides the couple's hypocrisy as weak — much like the country that shaped them, the U.S., which he dismisses as "over." The future, in his view, belongs to people like him, who have an incentive to dare all and respect nothing.

In that respect, Balram resembles the social-climbing heroes of 19th-century literature (a comparison Adiga himself has made) who reflected Europeans' conflicted feelings about industrial capitalism. By the end of the movie, it should be clear that Bahrani and Adiga aren't glorifying this neo-rags-to-riches tale.

Filmmaking choices encourage us to see Balram's rise in satirical perspective; as he grows more Machiavellian, the camera gets uncomfortably close to his face, and the basement room where he makes his darkest resolutions is flushed with sickly green light. Paolo Carnera's cinematography fleshes out his motivations by capturing the sweep and flow of Delhi streets, from squalid slums to the glittery haunts of the wealthy.

The White Tiger is a sleek and exhilarating production, but what makes it work is Balram's grubby, conflicted humanity. His escape from the "rooster cage" comes at a price that should keep us from cheering for him, but we might do it anyway.

Parasite (2019; Hulu, rentable): Fiery class consciousness animates this Oscar-winning satirical drama from Bong Joon-ho. In the same vein, but with an American setting and a surreal twist, try Sorry to Bother You (2018; Hulu, rentable).

Goodbye Solo (2008; YouTube, Kanopy, rentable): Before The White Tiger, director Bahrani was best known for quiet indie dramas like this one, about a Senegalese-born cabbie in North Carolina who forms an unlikely bond with a depressed older man he drives to the movies.