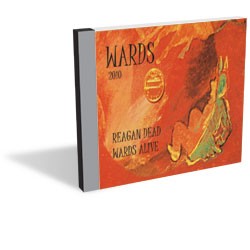 “We are the Wards, we play punk.” Such is the sneering opening salvo from Wards front man Tom Curley, introducing the latest album from the seminal Burlington punk band, Reagan Dead Wards Alive. Like the record itself, it is a straightforward declaration free of pesky contrivances such as subtext or irony. And, like each of the band’s sporadic releases since 1977, it is aggressively, defiantly lo-fi. The Wards have outlasted the Gipper, but it appears they still have some work left to do.

Clocking in at exactly one hour, over 24 tracks, Reagan is a blistering “fuck you” to … well, the same shit that riled up the band three decades ago. Ronald Reagan may be dead but, according to Curley and co., his evil legacy lives on. The ills that plagued us then — war, poverty, social injustice, yuppies — still do so now. Sadly, bands like the Wards will never run out of things to scream about. But, oh, how they scream.

“I may be old, but I ain’t shot down yet,” declares Curley at the start of “Shot Down,” just as the band explodes in a maelstrom of slobbering punk fury. The song is representative of the Wards’ ethos as a whole. Guitarists Franco and Chris Alley unleash frayed lines with ragged enthusiasm over rudimentary bass and Rick Lincoln’s frantic drums. Meanwhile, Curley snarls sub-melodically with an unhinged intensity double that of most punks half his age. It’s a sloppy, bracing mess — in other words, exactly what punk is supposed to be. Take notes, whippersnappers.

Reagan features a re-recording of the Wards signature anthem “Weapon Factory,” originally released in 1983. Though the titular General Electric plant is no longer in Burlington, time has hardly softened the song’s bruising impact. When Curley excoriates factory workers for taking coffee breaks in the midst of building weapons that “destroy the future,” it’s as poignant — that’s right, poignant — now as ever.

In an age when punk rock has been reduced to the milquetoast wailings of adolescent wannabes decked in Ramones T-shirts from Urban Outfitters, the mere fact that a band like the Wards exists at all is remarkable. That they would still be compelling and relevant 30-plus years after forming in the Queen City is a testament to the enduring promise of the genre. Or, perhaps, a sad suggestion that we never quite learned the lessons punk rock was supposed to teach us. At least we still have the Wards.