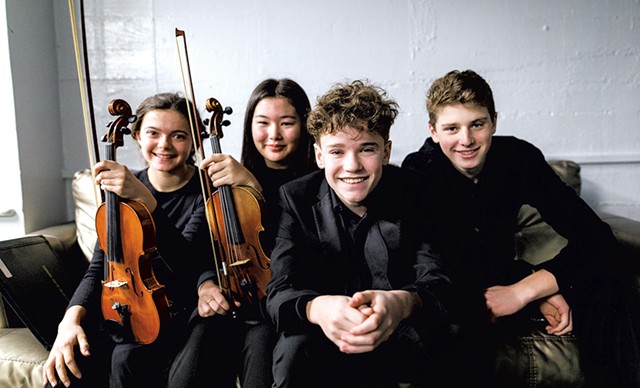 When Mark Alpizar became the new music director of the Vermont Youth Orchestra Association in July 2020, his first task was to devise a way for 80-plus students to rehearse together — including the wind instruments. The former assistant conductor of the Cleveland Pops Orchestra, Alpizar consulted a 400-page study by the National Association for Music Education on aerosol dispersion by wind instruments. Then he made a plan.

Alpizar ticked off his strategies during a phone call: "All the students wore masks. The wind players wore them until they were ready to play, and they had bell covers for the bottoms of their instruments. French horn players used gaiters [so they could still place their hand inside the bell]. The students were spread out across half a football field" — at the VYOA's spacious home, the Elley-Long Music Center in Colchester — "and divided into teams of smaller ensembles. And they had 90-minute rehearsals" instead of their usual three-hour ones.

The students crushed it. No cases of COVID-19 emerged, and all three major concerts of the 2020-21 season took place indoors, though they were livestreamed to audiences.

"You can't replicate the energy of a youth performance." Mark Alpizar tweet this

Now the VYOA is gearing up for its 2021-22 season, which audiences will be able to attend in person. The Vermont Symphony Orchestra is similarly preparing for its first indoor concert as a full orchestra since the start of the pandemic, on October 30, after a winter of mostly virtual concerts and a summer of smaller outdoor concerts around the state. Both organizations are also undergoing leadership changes.

At the VYOA, Alpizar replaced Benjamin Klemme, who left for a teaching job at Gordon College near Boston after two successful years at the VYOA's helm. This season, the new director will conduct or oversee 11 in-person concerts. Among the groups performing will be the organization's three auditioned ensembles: the VYO (orchestra), VYP (philharmonia) and VYS (strings).

The top-tier VYO will give three concerts. On October 17 at the Spruce Peak Performing Arts Center in Stowe, "A Fantastique Return," as Alpizar has named the program, features Hector Berlioz's entire 50-minute Symphonie Fantastique.

"It's incredibly difficult," Alpizar said of the piece, "but I have a very robust senior class: A little less than half my orchestra will graduate at the end of the year."

During a concert called "Something Suite," at the Flynn on February 13, violist Elizabeth Messier from Essex Junction will solo in Max Bruch's Romance for Viola and Orchestra, and Williston violinist (and concertmaster) Justin Lee will tackle Gypsy Airs by Pablo de Sarasate. (The program also features suites by the Black American composer William Grant Still.)

At the Flynn on May 1, "East Meets West" is a half Russian, half American program to which principal cellist Celilo Bauman-Swain of Charlotte will add a British piece: the final movement of Edward Elgar's Cello Concerto in E minor, Op. 85, with which she won the senior solo competition. "She plays it with such a fiery passion," Alpizar promised.

Musicians' families and friends will be thrilled to attend the concerts, but the general public is invited, too. Why go?

"It's high-quality orchestral music played very excitedly by youth," Alpizar said. "You can't replicate the energy of a youth performance." 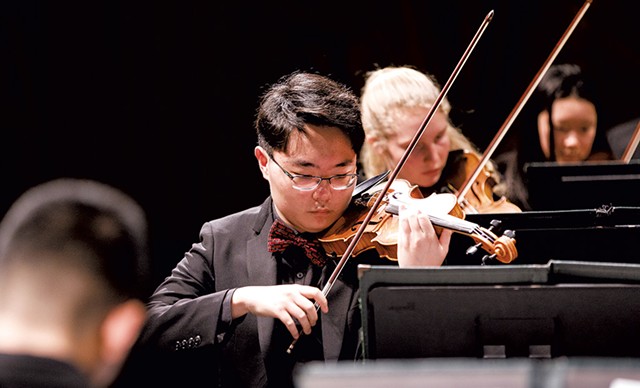 Audiences heading to the Vermont Symphony Orchestra's October 30 concert at the Flynn will hear three of those youth: A VYO string trio will play in the lobby as people enter.

"It's something we hope to do every time we're at the Flynn," VSO executive director Elise Brunelle said.

Fresh from one major transition — Brunelle came on board in May 2020 — the VSO now faces another one. After two decades as music director, Jaime Laredo retired this past May. Three of seven candidates for his position are scheduled to audition this season, starting with Akiko Fujimoto on October 30. Auditions will conclude by January 2023.

Fujimoto is a member of that still-rare species — a female conductor — with a stellar résumé. Born in Japan, she studied music at Stanford University and obtained two master's degrees in conducting, one from Boston University and one from the Eastman School of Music. She is currently music director of the Mid-Texas Symphony; before that, she was associate conductor of the Minnesota Orchestra. From 2017 to 2020, she covered for Esa-Pekka Salonen and others at the LA Phil.

At the Flynn, Fujimoto will conduct the world premiere of a cello concerto called "Sampson's Walk on Air," featuring principal cellist John Dunlop, by another accomplished woman: Jordanian Canadian composer Suad Bushnaq. Primarily a film composer, Bushnaq studied music in Syria and at McGill University. The VSO previously performed one of her compositions on a Holiday Pops tour.

Leading up to the October 30 concert, the VSO is offering a slew of events aimed at "widening and diversifying our audience," Brunelle said. A VSO Quartet will provide the music for an Adventure Dinner, created by event planner extraordinaire Sas Stewart, on October 9. Its members will play pieces by Maurice Ravel and Beethoven that are on the Flynn concert program.

In a collaboration with the University of Vermont Lane Series on October 26, Bushnaq will join several locals for a free presentation on New American music. The Vermont participants will include Winooski-based Afro-jazz singer-songwriter Irene Webster (who performs as KeruBo); Said Bulle, founder of the Burlington-based singer-dancers of A2VT, who perform fun fusions of hip-hop and their native African music traditions; and Mikahely, a Burlington-based guitarist from Madagascar who plays the valiha.

In conjunction with Bushnaq's visit, the VSO is running a statewide composition competition for middle and high school students. Contestants will compose works on any instrument based on a melody in Bushnaq's cello concerto. Finalists will then come to Burlington to work with the composer and attend the October 30 concert.

"Melody is melody, whether you're playing on an electric guitar or a string quartet," Brunelle said.

The October concert is the only classical one scheduled before 2022. Meanwhile, though, the VSO's other offerings are back: the Jukebox Quartet in November at five venues around the state, "Burlington Does Broadway" on December 31, the Holiday Pops tour and a tour pairing the Brass Quintet with vocal ensemble Counterpoint.

The VSO has additional inventive collaborations up its sleeve, including a plan for an hourlong concert in Essex accompanied by full-stage projections on a screen behind the orchestra.