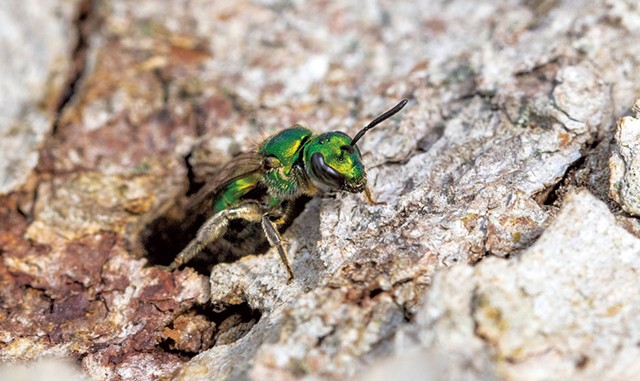 Spencer Hardy has a well-practiced bee-catching swing. He lunges forward with a net attached to a long handle, sometimes crashing into the brush or tall grass, and swipes the bee into his net. Just as quickly, he flips the net so that the mesh is draped over the top of the frame, barring the efforts of escape artists.

If it's a male bee — none of which have stingers — Hardy might hold it between his thumb and forefinger to get a closer look. Otherwise, he'll watch it for a few minutes as it buzzes around in a small glass vial. A micro lens attached to his smartphone camera allows for a detailed examination. If the bee's identity still escapes him, Hardy might take it home to view under a microscope.

"There's so much basic stuff we don't know about bees." Spencer Hardy tweet this

Hardy has scrutinized many bees in the past few years as the project coordinator for the Vermont Wild Bee Survey. The project, run by the Vermont Center for Ecostudies, is documenting the state's bee species and their characteristics. Scientists will use these data as a baseline for understanding how the climate crisis and other ecosystem changes affect the insects.

"There's so much basic stuff we don't know about bees," Hardy said. "They're small. They're hard to identify. The lack of resources for easy identification is definitely limiting."

So far, VCE staff and citizen scientists have identified 325 bee species in Vermont. If that number is surprising — and it is to most people, according to VCE cofounder and conservation biologist Kent McFarland — it's probably because so many bee species don't look the way we expect them to.

Vermonters are likely to recognize large, striped bumblebees, and they may be able to identify honeybees and wasps (which aren't bees at all). But numerous wild bee species are more elusive: Some are small and black, with hints of yellow or no yellow at all. A fair number don't live in hives but make their nests in the stems of plants or holes in the ground. Some have social structures; others are fairly solitary.

Recognizing hundreds of bee species is both a science and an art, and Hardy is "a bit of a wizard" at it, McFarland said. Hardy can identify many species on sight without catching them in his net. On a June afternoon in Richmond, he scanned flowering plants for signs of bees, accompanied by a reporter who excelled at pointing at various insects and asking, "Is that a bee?" 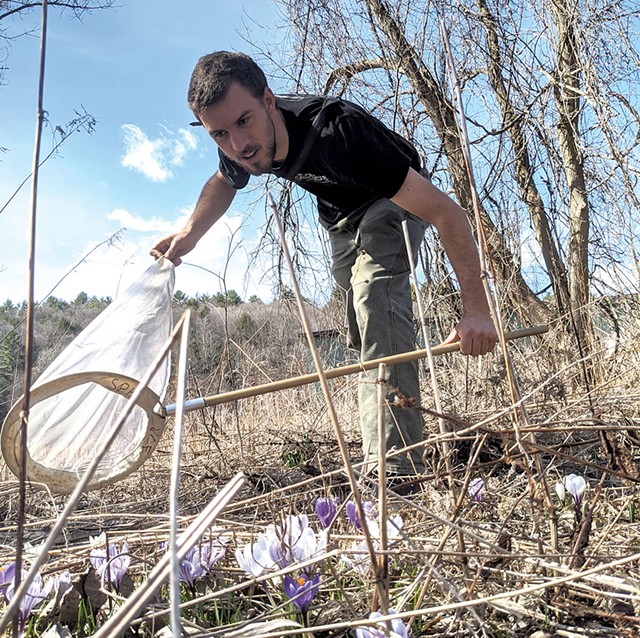 As a kid, Hardy was an avid bird watcher. After high school, he spent the summers of 2012 and 2013 coordinating the VCE's Vermont Bumble Bee Atlas, the organization's first foray into bee data. The VCE team photographed, identified and digitized historical collections of thousands of preserved bumblebees from the University of Vermont and Middlebury College, then compared them with modern-day species found in the state. Of the 17 bumblebee species that once called Vermont home, five seem to have disappeared.

When the Bumble Bee Atlas was finished, McFarland and VCE leadership decided to expand their efforts to include all bee species, in partnership with the Vermont Fish & Wildlife Department and in collaboration with the University of Vermont Gund Institute for Environment.

Hardy was eager to coordinate the wild bee survey. "I love bird watching, but at some point, we know all the birds that are here," he said. "You're never gonna find a new species for the state."

When Hardy can't identify a bee in the field, he takes it home, kills it and examines it under the microscope. He estimated that he could identify some 200 species that way; the rest, VCE preserves and sends to experts for identification. Hardy has a few thousand specimens in his house; in the winter months, he works through the backlog, naming the ones he can and sending others away.

When possible, however, VCE eschews the specimen-based identification method in favor of photography and iNaturalist, an online worldwide social network for sharing observations on biodiversity. Vermonters can upload photos of bees there and get help identifying them, thereby contributing to knowledge of the state's bee populations. Hardy said 50 Vermonters have joined the project so far.

Collecting insect specimens was a popular pastime in the late 1800s, McFarland said. Interest in it declined for many years, but he's noticed an encouraging recent trend of people observing and documenting the natural world, fueled in part by smartphone technology.

The public discourse around bee decline tends to focus on honeybees, but bee fans who delve into the science will learn to think beyond those popular non-native pollinators. Nearly 25 percent of Vermont's wild bees are specialists, meaning they pollinate one plant or group of plants exclusively. These bees play a key role in fostering the state's plants, flowers and agricultural crops — and do so more effectively than honeybees, according to some research.

Bumblebees, for example, "buzz pollinate," meaning they flap their wings at a frequency that causes flowers to release pollen; honeybees don't possess that talent. A 2018 UVM study found that the presence of wild bees on blueberry farms boosted berry size and quantity and moved harvest dates earlier.

Entomologists have a saying: Honeybees are to wild bees as chickens are to wild birds. At best, honeybees live fundamentally different lives from their wild counterparts; at worst, they're a domesticated agricultural force that can harm wild bees by spreading parasites and diseases.

"I'm a little bit concerned about everyone thinking that if they have hives in their backyard, they're doing something good for pollinators," McFarland said. "If the hives are not managed well by good farming and good practices, then you can get a lot more disease passing on to wild populations. And we also know they compete heavily with wild bees."

McFarland avoids generalizing about the state of the bee population, which varies heavily by species. "Not all bees are doing horribly, but in some groups, a majority of them are," he said.

He advised Vermonters who want to protect wild bees to avoid neonicotinoid pesticides, already banned for homeowner use in the state, and to let their lawns grow a little longer between mowings. (Learn more about environmental threats to bees and related Vermont legislation here.)

Those interested in observing bees can turn to VCE's online guide, which offers tips for identifying them and distinguishing between look-alikes. Species are listed in helpful categories such as "hairy bees" and "little black bees."

Once you start spotting bees, it's hard not to notice them. All those hours watching bees have helped Hardy appreciate their nuances, he said. With the help of the zoom lens on his camera, he can see them move pollen around on their bodies and even detect the mites and parasites that live on them.

"I feel like I know them on more than a scientific level. It's fun to watch individuals," Hardy said. "They're very expressive in some ways."