The Vermont Syrup Rush Is On, but Is Big Maple a Boon or a Bubble? | Agriculture | Seven Days | Vermont's Independent Voice

The Vermont Syrup Rush Is On, but Is Big Maple a Boon or a Bubble? 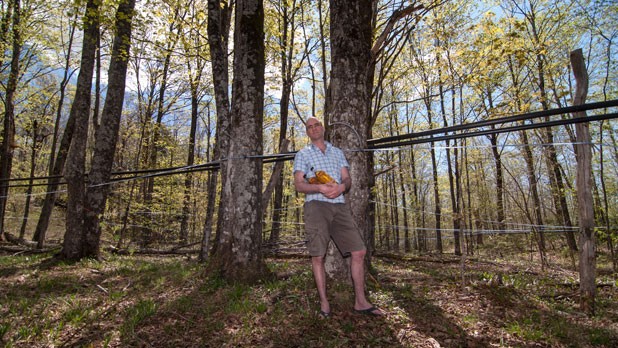 When Eric and Laura Sorkin got into the maple sugaring business five years ago, they went big. The couple invested $1.4 million in a vacuum pump, reverse-osmosis machine and other equipment and tapped sugar maples across 1000 acres they own in Cambridge and Underhill.

At the time, maple syrup prices were at a record high of around $4 a pound — double where they were a year prior — with a gallon fetching up to $70. The timing seemed perfect.

“The rest of the economic world was just tumbling,” Sorkin recalls. “Maple was making money, and nothing else was.”

Prices have softened a little since then, but Vermont today is experiencing a liquid gold rush nonetheless. Maple producers have tapped new technologies — such as those used by the Sorkins — that allow them to collect more sap and cut down on the energy-intensive boiling process that turns it into syrup. As a result, entrepreneurs of all stripes are getting into the biz.

This spring, sugar makers across the “maple belt” — 17 states and Canadian provinces where maple products are produced — harvested what could turn out to be the largest crop of maple syrup in modern history. Vermont’s official haul won’t be known until June, but sugar makers estimate 2013 production will be triple what it was a decade ago. Vermont had 1.5 million taps in 2003; today it’s up to 3.5 million.

U.S. Congressman Peter Welch thinks Vermont can go even bigger: He’s proposed making $100 million in federal funds available for maple research and marketing; to open state lands for tapping; and to incentivize landowners to lease their woods for maple production. Welch also drafted a bill — much of which the U.S. Department of Agriculture has since adopted — that would streamline grants for sugar makers investing in more energy-efficient technology.

David Marvin says it’s great to see more Vermonters making a living from a tradition once regarded as a labor-intensive backyard hobby.

“I’ve spent my whole life in this business, and in the early days, people knew it was foolish … to try to make a living sugaring,” says Marvin, who owns Butternut Mountain Farm in Johnson, a major buyer, packer and distributor of syrup. “Now there are dozens doing that.”

But foresters and smaller maple producers warn about growing too large, too fast. Where some see a boon to Vermont’s agricultural economy, others spy a bubble waiting to burst.

“It’s kind of scary around here,” says Ed Brannagan, who operates a small sugarhouse in Fletcher, in the heart of maple-rich Franklin County. “We’re not making hundreds anymore; there’s people making millions,” he says. “And as soon as someone starts making a million dollars, the game is changed.”

Gone are the metal sap buckets of yore. Bigger producers have switched to more industrial setups. Vacuum pumps suck sap through plastic tubes crisscrossing the woods — a process that can increase sap yield by 50 to 200 percent.

Once sap is back at the sugarhouse, reverse-osmosis, or RO, machines can remove up to 85 percent of the water from the sap, cutting down significantly on boiling time. It doesn’t come cheap — the newest touch-screen RO machines can run as high as $120,000 to $150,000 — but ultimately makes sugaring more profitable and efficient on a large scale.

Marvin of Butternut Mountain Farm wonders aloud if demand can keep up with the flood of new maple hitting the market; if it doesn’t, a price drop would hurt his company and the more than 300 sugarhouses in Vermont, Maine, New York and Québec whose syrup Marvin buys and packages. But he and his counterparts have reason to be optimistic. After a poor season in 2012, syrup packers were desperate to get their hands on this year’s crop. And they’re paying around $2.75 a pound for it — on par with lower-producing years, in which syrup makers benefit from supply-and-demand economics to get top dollar for their product.

Maple boosters are confident they can grow the market for syrup, enticing international customers with what Marvin calls one of the “very few ethnic American foods.” Perhaps more encouraging is the domestic market potential. Only 6 percent of Americans currently consume maple syrup, but syrup makers believe that more Americans want to ditch Aunt Jemima for the real deal, which sells for more than three times as much.

“Something like 80 percent of the syrup aisle in the United States is artificial,” notes Marvin. “We just have to convert those people who are using the junk to real maple.”

But more maple syrup means more taps in trees — and that’s not always good for forest health. Franklin County Forester Nancy Patch concedes most maple producers manage their sugarbushes responsibly, which includes tap removal at the end of the season so the trees can heal. But less responsible maple producers may leave taps in until the following season, making the trees susceptible to infection.

In their eagerness to “release” maples to grow larger, some producers are also thinning out secondary species from their forests, such as hemlock and birch. At its worst, this practice results in a maple monoculture that Patch says puts the forests at greater risk for disease or infection from invasive species.

“We’re losing that capacity for resilience in our forests,” says Patch. “For me, it’s important for sugar makers to see that our forests are more than just sap.”

Excessive tapping also lowers the value of trees for timber. Tapping causes a discoloration in the wood that can reduce a tree’s value to that of pulp or firewood. “We’re looking at the tree as a single commodity. How much sap can I get out of it?” says Paul Harwood, a Tunbridge forester. “The trees contribute a great deal more than that.”

It’s not just the trees that stand to be injured. Smaller sugaring operations worry that new producers could eat into their existing markets — or worse, tarnish the reputation of Vermont maple syrup by cutting corners in the sugarhouse. Sam Cutting IV, president of Dakin Farms in Ferrisburgh and vice chairman of the Vermont Maple Sugar Makers Association, is nervous about producers who are “strictly in it to make money” removing too much water during the reverse-osmosis process. That affects the taste of the syrup.

A few producers are milking their maples well beyond the traditional end of sugaring season and selling late-season syrup — called “buddy” syrup, after the trees begin to bud out — as a low-grade additive on the commodity market.

“Not all syrup is created equal,” agrees Brannagan, the Fletcher sugar maker. He sold his reverse-osmosis machine several years ago because he believes it reduced carmelization time in the pan and affected the depth of flavor. Brannagan likens syrup to wine, saying region has a lot to do with taste. But flavor doesn’t command a premium on the maple market, where bulk buyers pay more attention to color and density.

Brannagan sugars as a hobby to complement his excavating business and readily admits that, from a business perspective, he can’t compete with bigger operators. “I’m making thousands off of this, and they’re making millions, so who’s smarter?” he asks.

Of course, making millions requires a big up-front investment. Sorkin says he’s seen prices triple in recent years for land “that’s really only good for maple.” He senses that some newcomers are overpaying for land, taps and equipment. Plus, he notes, any return on investment hinges on a strong market for maple syrup.

“People are going into it making 10,000 gallons of maple syrup in their first year without any idea of where they’d sell it, just assuming that the bulk buyers would take it,” says Kevin Hall, a sugar maker in Braintree. “The maple bubble may break someday.”

A retired U.S. Postal Service employee, Hall sells sugaring equipment for Leader Evaporator and says his clientele is drastically different today than it was 30 years ago. Increasingly, he’s hearing from ambitious young people looking to make a living from maple and wealthy absentee owners who see sugaring as an investment. At a trade show last month, Hall was flabbergasted by how many customers told him they planned to quit solid jobs in government, hospitals and power companies — so they could sugar.

“They’re all giving it up to make their living with maple,” says Hall. Trade-show goers peppered Hall with novice questions about equipment. “They’re jumping in before they do their homework,” he concludes.

“I was that newcomer who didn’t know what I was getting into,” admits Sorkin, who turned to sugaring in search of a more profitable venture than the organic vegetable farm he and his wife started when they moved to Vermont in 2000. He was shocked by the difficulty of the work. He slept almost every night in the sugarhouse for six weeks in March and April.

But looking back on five seasons of large-scale sugar making, Sorkin says he’s glad his family took the gamble. Relying on Mother Nature’s sweet side is risky business, but “we’ve made a very good return,” he says, downplaying, “I wonder if we would have been smarter taking the money, investing it and buying a house on the beach.”

Onlookers may have looked askance at the Sorkins’ “go big” approach in 2009 — but that’s changing now, too. “Give it a few more years,” Sorkin says of the big maple trend, “and we’ll be considered a midsize operation.”