The Vermont State Police Are Following You — on Twitter 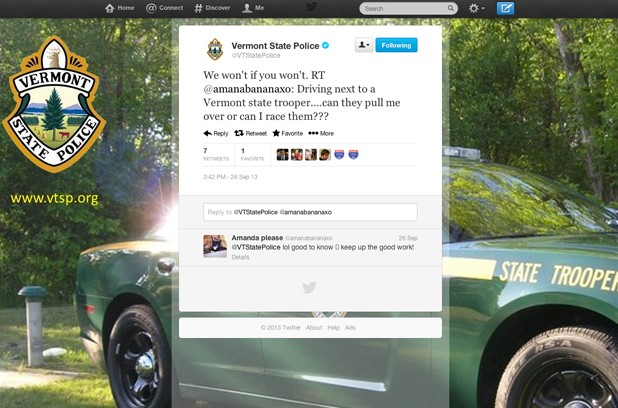 Given the pervasiveness of social media, it’s not terribly surprising that a state law-enforcement agency is tweeting alongside ad firms, food trucks and nearly every other business imaginable.

More jarring is seeing a cop dropping “YOLO” — short for "You only live once" — into a conversation. But that’s what you’re likely to see if you follow the Vermont State Police on Twitter. “What’s the best reason to wear your seatbelt? #YOLO” read a tweet on December 20 of last year. The inclusion of that pop culture-approved hashtag elevated the tweet from banal to hip.

What's the best reason to wear your seatbelt? #YOLO

One of the most distinctive voices on the @VTStatePolice Twitter account is Rich Kelley, a Vermont State Police dispatch supervisor. “It’s just trial and error, and we’re trying to be noticed,” said the 42-year-old Franklin County resident. “You’ve gotta laugh it up a little bit to be noticed.”

To be sure, the state troopers use Twitter to pump out highway traffic warnings, missing-persons alerts, press releases and other content you’d expect from a law-enforcement agency. But it’s the friendly, clever posts that usually hit it big when measured by the social media guru’s favorite metric: “engagement.” And that’s a big part of the reason you’ll find the state troopers on social media, according to public information officer Stephanie Dasaro. It’s an opportunity to show the softer, friendlier side of the force.

Typically staffed by either Dasaro or Kelley, the VSP’s account replies to questions from Twitter users, including simple ones such as: When they pull a car over, why do troopers always touch the trunk? (To make sure the trunk is secure, if you’re wondering.)

But Kelley tends to handle the humorous queries. A few examples:

The boat is clear from I-89 between S Burl and Winooski. Expect some delay as traffic clears, but lanes are open. No life jackets needed.

No crashes though, right? RT @oliverames: We have seen a state trooper on every ramp in VT i89

We won't if you won't. RT @amanabananaxo: Driving next to a Vermont state trooper....can they pull me over or can I race them???

“We don’t seem as stuffy on social media as you might expect,” Dasaro says. “We have a very specific and difficult job to do, but we’re still human at the end of the day. So if we can be funny, that’s really cool.”

VSP uses Facebook to solicit the public’s help in ongoing investigations, but mixed in with the surveillance photos you’ll find photos of troopers at blood drives, sports games and other community events. There’s also a popular “Where’s the Cruiser?” photo series, which features photos of police cruisers in scenic “mystery” locations around the state, from the top of Mount Equinox in Manchester to Milton’s Sand Bar State Park.

“We literally are begging our troopers all the time: Please send us photos of your cruisers somewhere cool,” Dasaro says. “Even if it’s silly stuff, people just want to interact and guess where the cruisers are, and it’s been really amazing.”

Dasaro says not all state troopers are on board with the department’s online efforts, but “more and more, we’re getting requests [from investigators] to post surveillance photos,” she says. “They’re becoming more forthcoming with information, and understand the value of [social media].”

Troopers in the field even took the reins of the department Twitter account in March as part of the Global Police Tweet-a-thon, in which state cops tweeted about their days — and posted selfies. “These guys have a sense of humor, and it’s nice to see that personality come out when they get to tweet for us,” Dasaro says. (The next installment of the Global Police Tweet-a-thon is next month.)

“If we go out there and show people that we are interesting, we are willing to poke fun at ourselves, we are willing to listen to criticism and feedback, and have a funny edge to it, people are gonna wanna hear what we have to say and are going to repost what we have to say,” Dasaro says. “And therefore we can get more serious messages out there when it comes time to do that.”

Next up for the Vermont State Police on Twitter: Dasaro says she’d like to start posting police press conferences on the department’s YouTube channel. And no matter the network, expect to see more green-and-gold cruisers online: The department’s strategic plan calls for 25 percent annual growth in its social-media presence.

Other police agencies in the state are also using social media — to different degrees and with mixed results. The Burlington Police Department’s Twitter account merely auto-posts press releases and alerts. In Bristol, police started posting mug shots on Facebook, which, according to an August article in the Addison County Independent, was viewed as a form of digital shaming that drew both praise and criticism from locals.

Outside Vermont, Seattle’s police force affixed tips for marijuana users to Doritos bags during the city’s Hempfest, and its stunt went viral.

Boston’s canine unit began tweeting this month in the “voice” of a police dog named Bushido.