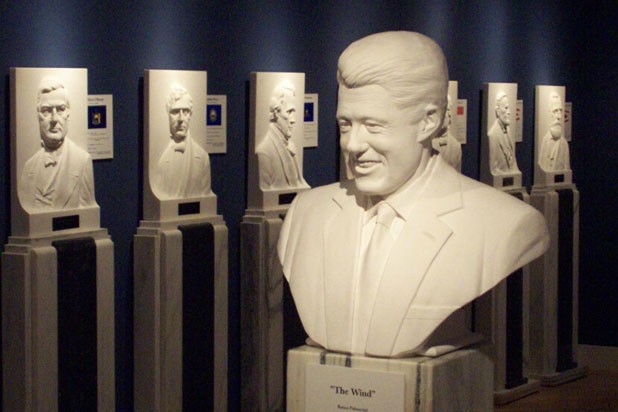 If you’re road tripping this summer to Washington, D.C., or New York City, chances are you’ll see buildings whose marble was quarried or finished, or both, in Vermont. The marble on the U.S. Supreme Court building, the Lincoln Memorial, the Thomas Jefferson Memorial, the Tomb of the Unknown Soldier and the United Nations building was all the work of the Vermont Marble Company in Proctor.

Founded in 1880 by Redfield Proctor, the company rose over the next 50 years to become the world’s largest marble manufacturer. Beginning in 1886, it built the town of Proctor to settle the thousands of skilled immigrants it recruited. In the center of town stands the Vermont Marble Museum, which the company created in 1936 — one of Vermont’s first tourist attractions.

The museum and the town are still well worth a road trip. Proctor, Vermont’s only company town, remains a gem of a living historical hamlet. And, though the Vermont Marble Company was bought out by a multinational in 1976, the Vermont Marble Museum has endured as a quirky combination of compelling and random-seeming exhibits, many added by its owners of the last 20 years, Marsha and Martin Hemm. Currently, the museum is transitioning from private to nonprofit ownership, guided by the Preservation Trust of Vermont.

A couple of weeks ahead of the museum’s June 1 opening, PTV executive director Paul Bruhn gave Seven Days a tour of it and of Proctor. The day was the kind that tempts city mice to become country mice: blue-sky sunny with great, white cumulus clouds casting shifting shadows on the greening hills surrounding the town.

Entering Proctor feels like a formal promenade: One crosses a 1915 white-marble, balustraded bridge over Otter Creek that Bruhn called “one of the most magnificent bridges in Vermont,” made all the more so by the Vermont Agency of Transportation’s restoration job in 2003. Within a mile of the bridge on either side stand two 1880 marble churches, one with Tiffany glass windows; a 1952 marble-clad high school; and brief stretches of marble sidewalk lining the pleasantly laid-out neighborhoods. The town retains a visible sense of pride: Nearly every yard is carefully mowed and landscaped, and every abode looks freshly painted, from those on managers’ row to the workers’ houses.

One house near the village’s center sports a sign that reads “OMYA,” the name of the Sweden-based international industrial-minerals producer that bought out Vermont Marble. Recently, Omya moved its U.S. offices to Ohio; in Vermont, it has reduced operations to processing ground marble from the Middlebury quarry for calcium carbonate.

Omya operated the museum until 1994, when the company sold it to the Hemms, both former employees. (During the early 1980s, Marsha handled Omya’s advertising and graphic design, and Martin was general manager of marble production.) One of the many museum exhibits the couple added was a room displaying the uses of calcium carbonate, which shows up in everything from toothpaste to Cheerios to diapers to vinyl siding.

The Hemms, who also own a marble-façade business based in Vermont and Germany, were ready to sell the museum last year for retirement reasons but couldn’t find a buyer. They were resigned to closing the place and auctioning off its contents. Bruhn said PTV’s leadership learned of the museum’s potential demise through a Rutland Herald article and started scrambling to raise money to save it. Aiming for $400,000, the trust raised $250,000, which allowed it to purchase the museum’s exhibits, the gift shop and an important collection of more than 2000 glass-plate negatives dating back to the company’s beginnings.

But the PTV had to let go of the museum’s sizeable trove of company documents and the rare collection of marble samples the company had collected from around the world. These treasures are headed to the University of Pennsylvania, where they will be catalogued and archived. Curators at the Ivy League institution took an interest partly because of the Vermont Marble Company’s role in creating U.S. landmarks.

Bruhn said he’s “sad to see all of that go,” but Marsha Hemm is relieved by the transfer. “The massive amount of information we had is almost more than a facility in Vermont could handle,” she said.

Before deciding to sell, Hemm, 50, was developing an exhibit showcasing Proctor’s immigrant populations: The town developed strictly defined Italian, Welsh, Polish, Swedish and other ethnic neighborhoods. She found the material fascinating; one company receipt she mentioned, dating from the 1890s, was for the train fare from Ellis Island to Proctor for four “green” — that is, non-English-speaking — Swedes.

“The marble company had translators at Ellis Island. They looked for people who had expertise in carving or machinery, and paid their train fare up to Proctor,” Hemm explained.

But, she said, “There’s just so much that you’d need a computer database of all the employees” to do the exhibit justice. Hemm started the database, but it proved a never-ending task, not least because “almost 25 percent of our visitors had a relative who used to work in the company,” Hemm said.

The Hemms have agreed to run the museum for another season while the PTV embarks on its second fundraising effort — it needs another $480,000 to buy the museum’s building, of which $125,000 has been raised — and searches for a nonprofit entity to take over its management.

The museum occupies about half of the Vermont Marble Company’s long marble-manufacturing shed — a series of connected factory buildings extending along the railroad at the center of town. Some have clerestory windows on the second floor; all shed old white paint. A jumble of castoff marble slabs fills the overgrown grass around the parking lot. “There’s a lot to be done, but this is a gritty industry,” Bruhn pointed out.

Visitors enter the museum in the middle of the shed, passing through a marble-block archway weighing 188,521 tons that the Hemms added to provide a “talking point.” Upstairs, the exhibits’ entry room seems calculated to convey how quickly marble can turn a few walls into a grandly formal space. Two white marble sculptures of entwined couples sit atop black marble pedestals on a marble-tile floor, while large panels of Vermont-quarried marble in an array of colors line the half-walls built into the high-ceilinged factory space. The black pilasters between panels particularly set off one stately, gray-veined white slab labeled Imperial Danby, which is quarried at Danby Mountain.

Some of the museum’s other 16 rooms, occupying 45,000 square feet, also offer just the opportunity to admire the range and beauty of marble and the skills of its carvers. A complete Catholic chapel features marble in every color imaginable; the Hall of Presidents contains busts in bas-relief of U.S. commanders-in-chief from George Washington through George H.W. Bush. (The sculptor, Proctor resident Renzo Palmerini, retired from carving at that point due to difficulty with his hands.)

Some exhibits are simply showrooms. A large display bathroom is clad with Vermont Champlain Black, quarried in Isle La Motte. A scaled-down mockup of the U.S. Supreme Court façade fills a wall, sporting Imperial Danby, Vermont Verdoso and Dark Rutland. The largest room has one massive panel after another of samples from around the world, with mesmerizing names such as Neshobe Gray Clouded and Westland Green Veined Cream.

A few exhibits have historical interest. A former finishing room has been left as is, with rolling cranes on tracks as high as the clerestory windows and a fine white dust covering everything. According to Martin Hemm, workers benefited from inhaling marble dust. “It actually gets absorbed by the body and prevents osteoporosis,” he said — unlike granite dust, which “sticks to your lungs and gives you silicosis.”

Another history-oriented room is dedicated to the Tomb of the Unknown Soldier. Printed panels reveal that the Vermont Marble Company quarried the memorial’s stone in Colorado — at its height, the company owned the rights to all marble in Colorado, Tennessee, Alaska and Vermont — and shipped it to Proctor to be cut and finished. A 1931 black-and-white photograph shows workers posing proudly beside the finished product. Such large-format photos are integrated throughout the displays; they were developed from glass-plate negatives produced for the company by photographers it hired to document its every move from 1890 through 1935.

The Hemms added a colorful room dedicated to geology to educate the busloads of school children who come at the beginning and end of each season. They also made a 15-minute film about the history of the company, which is shown on a loop with two other short films in the bare-bones theater.

When Seven Days visited, the films hadn’t yet started running, so the museum seemed to have neglected its most compelling tale: the history of the Vermont Marble Company itself. Bruhn said he would like to see the museum “tell more stories about the company,” and “a more complete story” overall, when its nonprofit operator takes over. “For example, we need a photographic exhibit of every Washington monument that was made by Vermont Marble,” he said, as well as one on the immigrant populations.

Bruhn also hopes the museum will someday establish cooperative efforts with Vermont’s two other stone industries, granite and slate, to educate visitors on the state’s geology. “There’s this wide range of ways you can see stone in Vermont,” he said.

Having stepped in as a transitional entity, PTV’s leadership was reluctant to define such goals for the museum during the initial capital campaign — a hesitation that may have put off potential donors, Bruhn admitted. But now, he hinted, PTV is much closer to finding a nonprofit to take on the new vision for the museum. “It’s not going to be a local nonprofit. A new organization will be founded,” he explained. “We’ve talked to enough people statewide and beyond.”

That’s good news for the marble museum. When it was established, the Vermont Marble Company’s biggest commission was still in its future: quarrying and fabricating 2000 tons of West Rutland for the Le Corbusier-designed United Nations Secretariat building in New York, which went up in 1950. The company’s star has been diminishing since then, but its legacy is now, it appears, on the rise.

The original print version of this article was headlined "Set in Stone."