The Vermont Legislature Looks to Limit Police Use of Force 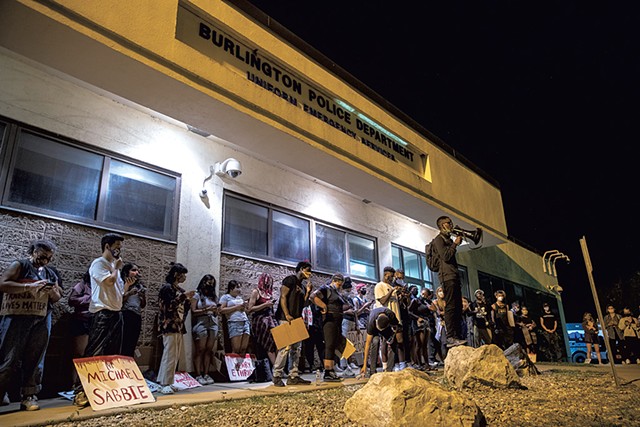 For weeks, social justice activists have occupied Burlington's Battery Park and marched in the streets in an effort to reform the city's police department. Though part of a national movement reinvigorated by the killing of George Floyd by Minneapolis police officers, Burlington's protests have had a hyper-local aim: the firing of three Queen City officers accused of using excessive force.

At the same time, state lawmakers have been engaged in an under-the-radar debate that could have far broader and deeper ramifications for policing in Vermont. At issue is whether to enact in state law some of the toughest restrictions in the country on the use of force by police officers.

"What we're doing is trying to ensure that law enforcement is accountable to the residents of Vermont when they use force," said Rep. Martin LaLonde (D-South Burlington), a member of the House Judiciary Committee and an architect of the proposal.

The state's roughly 70 law enforcement agencies — ranging from tiny town police departments to the Vermont State Police — are currently guided by a patchwork of internal use-of-force policies shaped by court decisions, local governments and national experts. According to some legislators, that system has sown confusion and failed to achieve accountability when officers violate those policies.

"I think the problem is that Vermonters have lost trust and confidence in law enforcement — that Vermonters don't know what the standards are," said Rep. Maxine Grad (D-Moretown), who chairs the House Judiciary Committee.

Use of deadly force is hardly rare in the state. In 2019 alone, according to a report by the Vermont State Police, its officers shot suspects in five separate incidents.

Even leading law enforcement officials agree that the time has come for uniform standards. "We shouldn't have 200 different versions of how to use force," said Public Safety Commissioner Michael Schirling, who oversees the state police and previously served as chief of the Burlington Police Department. "We should have one."

What that single version would look like — and who should be charged with writing it — is a matter of considerable dispute.

Even before Floyd's death in May, Schirling had been arguing that law enforcement representatives, working with community members, should draft a model use-of-force policy that could be deployed throughout Vermont. In order to encourage local police departments to adopt it, the state would withhold funding and technical support from those that did not.

But after Floyd, an unarmed Black man, was killed by a Minneapolis officer who kneeled on his neck, Vermont lawmakers felt pressure to take action of their own. In June, the legislature passed a bill, S.219, that banned the use of choke holds by law enforcement and required state police to wear body cameras. Gov. Phil Scott later signed it into law.

The Senate also passed S.119, which would allow officers to use lethal force only against those who posed "an imminent threat of death or serious bodily injury" to the officer or somebody else, or to apprehend a fleeing suspect who posed a similar risk.

When the legislature reconvened late last month for a brief session to address the state budget, the House Judiciary Committee took up S.119. LaLonde proposed expanding it to cover not just lethal force but all force deployed by police officers. "If we're going to put standards in use of force, let's not stop with use of deadly force," he said.

LaLonde's proposal would limit officers to using "only the force objectively reasonable, necessary and proportional" to do their jobs. They would be required to attempt to de-escalate confrontations and take into consideration whether a factor beyond a subject's control — such as a mental health crisis, medical condition or language barrier — was contributing to their conduct. An officer's decision to use force would be evaluated after the fact based on "the totality of circumstances," not just the seconds or minutes preceding its use.

The proposal would also amend the state's antiquated — and, LaLonde argues, probably unconstitutional — "justifiable homicide" statute, which protects officers who kill people in the line of duty.

Wilda White, a Poultney attorney and psychiatric survivor who chairs the Vermont Mental Health Crisis Response Commission, supports LaLonde's proposal. She believes that, if implemented, it could help defuse confrontations between officers and people experiencing mental health crises, who make up a disproportionate percentage of those killed by police in Vermont.

White points to the case of Ralph "Phil" Grenon, a 76-year-old with paranoid schizophrenia who was fatally shot by Burlington police in 2016. After receiving reports of threatening behavior, officers entered his apartment, saw that he was carrying a knife and fired a Taser at him. Over the course of a four-hour standoff, they fired pepper balls into the bathroom in which he had barricaded himself and, in a final attempt to subdue him, fired a Taser at him a second time. That prompted Grenon to move toward the officers with two knives, leading an officer to shoot him six times.

A two-year investigation of the incident completed this year by White's commission found that police "did not take into account how Mr. Grenon's mental illness affected his ability to comply with their commands or how his mental state might affect his reaction to pepper balls or Tasers." The report also found that, "Given his mental state, each of their incursions likely heightened Mr. Grenon's sense that he was under attack."

A minority report written by White and another commissioner found that the officers had violated eight different departmental policies. "The Burlington Police Department had all the policies necessary to keep Phil Grenon alive. They simply did not follow them," White said in an interview. "With a statute, there'd be more of an impetus to follow the law. Easy to ignore the policy, harder to ignore the law."

In testimony last week before the House Judiciary Committee, Attorney General T.J. Donovan also cited the Grenon case as a reason to establish a statewide use-of-force policy. At the time of Grenon's death, Donovan was serving as Chittenden County state's attorney. He and then-attorney general Bill Sorrell found that the officers' actions were justified under the law.

One reason for that conclusion, Donovan told lawmakers, was that the current standard only considers the moments before lethal force is deployed — not, say, the four hours leading up to it.

"If we had a 'necessary' standard and a 'totality of circumstances' standard, I'm not sure you'd go into that apartment," he said, adding, "Public safety wasn't at risk in this case. Mr. Grenon was in his house by himself."

Schirling, who is Scott's top public safety official, strongly opposes both versions of the bill. Other law enforcement leaders — including Col. Matthew Birmingham, director of the Vermont State Police, and the chiefs of the South Burlington and Montpelier police departments — have also raised concerns about the legislation in recent testimony.

Speaking to the Senate Judiciary Committee last week, Schirling warned that putting use-of-force standards in statute would prevent the "iterative evolution" of such standards over time. Even more concerning, he argued, is that it could take years for the courts to interpret the new language in the law, making it more difficult to train officers and exposing their departments to "organized extortion" by plaintiffs' attorneys who might sue them.

"It will do the opposite of what we're trying to achieve, which is clarity and consistency and accountability," Schirling said. "It will create ambiguity, confusion and not lead to consistent outcomes, because we literally will not know how to interpret it for years."

Sen. Phil Baruth (D/P-Chittenden) took exception to the dig at the plaintiffs' bar, calling it "a very, very serious charge," and told Schirling he sounded like a chemical company spewing "hyperbolic assertions" in order to avoid regulation and oversight.

"Your comments strike me as a kind of full-throated defense of the status quo, even though you use the word 'modernization' a lot," Baruth said in committee. "I don't think it's a crazy idea to say that force — particularly deadly force — should be proportional."

When Schirling doubled down on his arguments, Baruth brought up the Battery Park protesters and said that at least one of the officers facing their wrath, who used nonlethal force, should have been prosecuted, as well as fired.

"Why don't individuals in Vermont and other states get prosecuted, and if they do, why aren't they successfully prosecuted?" he asked. "It's because the robust system that you're defending isn't working, and so that's why the legislature has been called upon to step in."

Even as the legislature deliberates over S.119, the Scott administration is moving forward on its own. In an executive order issued last month, the governor called on Schirling, executive director of racial equity Xusana Davis and others to draft a statewide model use-of-force policy by the end of this month.

Criminal justice reformers are skeptical that any policy crafted by those who would be regulated by it will do the trick. "We're at a moment where the public has lost faith in law enforcement's ability to police themselves," said Falko Schilling, a lobbyist for the American Civil Liberties Union of Vermont.

Whether lawmakers will reach agreement in the remaining weeks of the condensed legislative session remains to be seen. The House Judiciary Committee is scheduled to vote on the measure later this week. But even if the full House signs off on it, the Senate would also need to approve it.

"I'm concerned about the amount of time we'll have to respond to the changes they make," said Sen. Dick Sears (D-Bennington), who chairs the Senate Judiciary Committee. "I worry also that, given Schirling's comments, the governor would veto the bill anyway." Sears' colleague on the committee, Sen. Joe Benning (R-Caledonia), said he found the debate important but was concerned that the House proposal was "not yet ready for prime time."

According to Schirling, it's too soon to say whether Scott would actually veto the bill. And though he doesn't agree with the legislature's current approach, the commissioner said he's not opposed to the discussion. "In a strange way, we really do appreciate the focus on improving what we're doing," he said.