At the Vermont Institute of Natural Science in Quechee, warm weather brings songbirds, but not always under happy circumstances.

"We have a steady supply of birds, especially in the summertime," said Chris Collier, director of on-site programs and exhibits at the nonprofit, which counts avian wildlife rehabilitation among its many conservation missions. Those songbirds often end up in the Center for Wild Bird Rehabilitation at VINS because they fly into a window, get attacked by a cat or are struck by a moving vehicle.

According to a report published by Science in 2019, North America has lost more than one in four of its birds, or 2.9 billion, since 1970. While that number includes all birds, the songbird population has particularly suffered — largely due to habitat loss and degradation, according to Collier.

To serve its avian residents while educating the public about their plight, on July 1, VINS unveiled its new Songbird Aviary on its 47-acre campus. At 2,160 square feet, the aviary is 15 times larger than its predecessor, which was built more than a decade ago as an Eagle Scout project. It houses nine songbirds, but Collier hopes it will eventually hold 20 to 30.

"We wanted it to appear as if you had dropped a building on a forest." Chris Collier tweet this

Visitors to the previous aviary had to stick their faces close to the wire and peer in to find the birds, Collier said. The updated one, in contrast, is a walk-through exhibit that immerses visitors in a close approximation of the birds' habitat.

People enter the new aviary through a set of double doors, which ensure that the birds won't escape. Inside, visitors can stroll along a pathway down the middle of the exhibit or sit and observe the birds from a wooden bench.

Screened-in walls and ceilings let natural light stream in for both the birds' and observers' benefit. The space is populated with a collection of plants and shrubbery native to Vermont.

"We wanted it to appear as if you had dropped a building on a forest," Collier said.

Because they are fairly small, the songbirds are initially difficult to locate amid the plantings in the exhibit. The challenge of identifying the birds, however, feels authentic to the experience of looking for birds in the wild.

After locating the birds, visitors can watch them fly around, eat or drink, and interact. 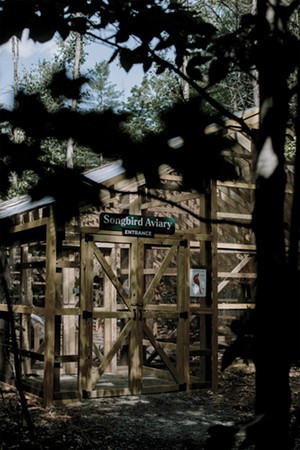 Collier said he and VINS executive director Charlie Rattigan drew inspiration for the exhibit from walk-through aviaries elsewhere in the country. Collier made trips to observe the aviaries at the Maine Wildlife Park, Arizona-Sonora Desert Museum, Bronx Zoo, and Columbus Zoo and Aquarium in Powell, Ohio, in the months leading up to construction.

Work on the aviary began in November 2021 and continued through mid-June, Collier said, which gave the birds a couple of weeks to acclimate to the space before the July opening.

The project was funded by donations. While Collier declined to put a price tag on the new aviary, a 2019 Seven Days story noted that VINS solicited $1.7 million in grants and donations to build its Forest Canopy Walk, another recent addition to the campus.

A focus of the aviary project was selecting native plants in an effort to show visitors how growing bird-friendly plants can help the declining songbird population.

"Not only can people see the songbirds, learn about their importance, but then they can [also] learn about how they can garden at home," Collier said.

VINS enlisted Sylvia Provost, landscape designer and owner and president of Henderson's Tree & Garden Services in White River Junction, to choose plants for the aviary. Provost teamed up with Windsor County resident Carolyn Hooper to install the plantings throughout the spring.

VINS and Provost agreed beforehand that all plants in the aviary should be recognized as native to Vermont by local nurseries.

Beyond that, they considered plant height, shade requirements, and which plants would provide food for birds or pockets in which they could nest.

Provost and Hooper settled on cranberry, winterberry, red chokeberry and black lace elderberry plants, all of which provide food, as well as pagoda dogwoods, native ferns and some logs.

"Because [the plants] are native, they should take their course just like they would in the woods," Provost told Seven Days by phone. "That is the ultimate goal."

Native plants are desirable because they can provide the birds with the same nourishment they would find in the wild.

Provost hopes more local nurseries will begin to prioritize selling native plants, making them more accessible to Vermont gardeners. "The key is to have a good nursery that you're comfortable with and to always seek information from the people in the nursery who are knowledgeable about plant material," she said.

The aviary has a display panel explaining how people's gardening choices can help the songbirds. Collier called focusing on food sources more "positive and accessible" than on some of the other challenges songbirds face, such as voracious backyard predators.

All of the birds currently in the aviary — two American robins, two northern cardinals, two mourning doves, a white-throated sparrow, a cedar waxwing and a Bohemian waxwing — suffered injuries that required care in the rehab center, where staff determined that they were no longer able to survive in the wild.

VINS, which celebrates its 50th anniversary this year, has plenty more to offer visitors — a raptor exhibit with about 30 birds, the Forest Canopy Walk, a reptile room, an exhibit called "Birds Are Dinosaurs," a forest exhibit, an Adventure Playscape playground and a number of nature trails.

While some programs at VINS are geared toward kids, such as the playscape, Collier said the new aviary was a space intended for calm observation by people of all ages. "We [want] to keep it a little toned down, so that the birds are not completely thrown off or upset," he said.

A peaceful sanctuary for the birds and visitors alike, the new aviary is an immersive opportunity to observe songbirds as they would be in the wild.

The original print version of this article was headlined "Sing Out"