The Vermont Gran Fondo Is a Party on Wheels

For hard-core, hill-climbing cyclists around Vermont, and plenty more from out of state, summertime means the call of the LAMB — the 100-plus-mile route that traverses the Lincoln, Appalachian, Middlebury and Brandon gaps. Forcing cyclists to wheel and wheeze up and down more than 10,000 feet, it's a bragging-rights ride of passage. It's also a genuinely intimidating undertaking: What happens if your bike, or your body, breaks down on the super steeps?

This weekend, Green Mountain gearheads eager to try the LAMB will get the European treatment when the first-ever Vermont Gran Fondo rolls into Addison County. Think mechanics, course marshals and peanut-butter-and-jelly sandwiches, plus the support vehicles known, appropriately enough, as SAG wagons.

Described by Bicycling magazine as a "party on wheels," a gran fondo is typically a high-spirited affair that treats cyclists to sumptuous meals and fine wines after a ferocious ride through the European countryside. The local event on June 14, however, will be less of a party and more of a panting, heart-stopping, adrenaline-rushing ride up and down Vermont's most notorious mountains. "This will be hard," promises event director Sue Hoxie. "It is not the average cyclist who is going to be able to do this."

Oh, and there will still be a party. It's down in the town of Middlebury, where a slew of arts events will celebrate the area's rich biking culture.

"You sometimes don't realize what you have until somebody else whispers it in your ear," says longtime Cornwall resident and Sports Illustrated writer Alex Wolff. He recalls when another publication, Yankee Magazine, called his county home to the best road biking in New England. "I said, 'Yeah, that's us!' The drivers are considerate, and the people who bike seriously remark on how they don't run into one another because there are so many roads," Wolff says. "It's a matter of embracing and formalizing what we have, like the LAMB."

The idea of a Vermont Gran Fondo got legs late last summer, when nearly a dozen cycling enthusiasts began working with the Addison County Chamber of Commerce to organize and promote a road ride akin to the Vermont 50 mountain bike race out of Brownsville. They wanted it to be tough but fun. "It's not a race," says Ripton rider and Vermont Gran Fondo organizer Willem Jewett, who happened to be in France last summer when 8,000 people showed up for a spin. "The format is accessible not just to the fittest of people."

"This brings people in and shows them that this is a great place to ride the roads, stay in the hotels, eat in the restaurants, which is what we've also been working on for the winter," says Mike Hussey, director of the Rikert Nordic Center in Ripton. He adds that the Gran Fondo fits neatly into the county's long-term economic development plan: "These types of events provide jobs that young people entering the work force are looking for."

The route itself might evoke riders' memories of a typical childhood job — the paper route. "Lincoln Gap is a particularly miserable stretch of road," says Fondo cofounder Andrew Gardner of Ripton. "I ride it just infrequently enough to forget how steep it is — steep enough that I nearly always have to tack back and forth in a type of 'paper boy' cycling maneuver to keep momentum up the climb."

On the slightly milder Middlebury Gap, riders have an extra incentive to put mettle to the pedals. The fastest woman and man through this segment will be named the "Ewe" and "Ram" of the LAMB and win $100 gift certificates for Velocio, a high-end clothing company.

Velocio will introduce its jewel-colored jerseys at Middlebury's Clementine store on Friday, June 13, part of a community-wide celebration of all things cycling starting this weekend and running through the month. That includes a Friday evening Middlebury Arts Walk featuring a display around town of a dozen "Bicycles Beyond Repair" donated by Local Motion's Bike Recycle Vermont, followed by a screening of The Armstrong Lie, a documentary by Alex Gibney, at the Marquis Theatre.

Après ride on Saturday, Lincoln Peak Vineyard will treat athletes to music by Ten Rod Road and, of course, to wine. More troubling substances will be the subject of discussion on the preceding Thursday night at the Champlain Valley Unitarian Universalist Society, where Sports Illustrated's Wolff will chat with Reed Albergotti, a Wall Street Journal reporter who coauthored Wheelmen: Lance Armstrong, the Tour de France and the Greatest Sports Conspiracy Ever. 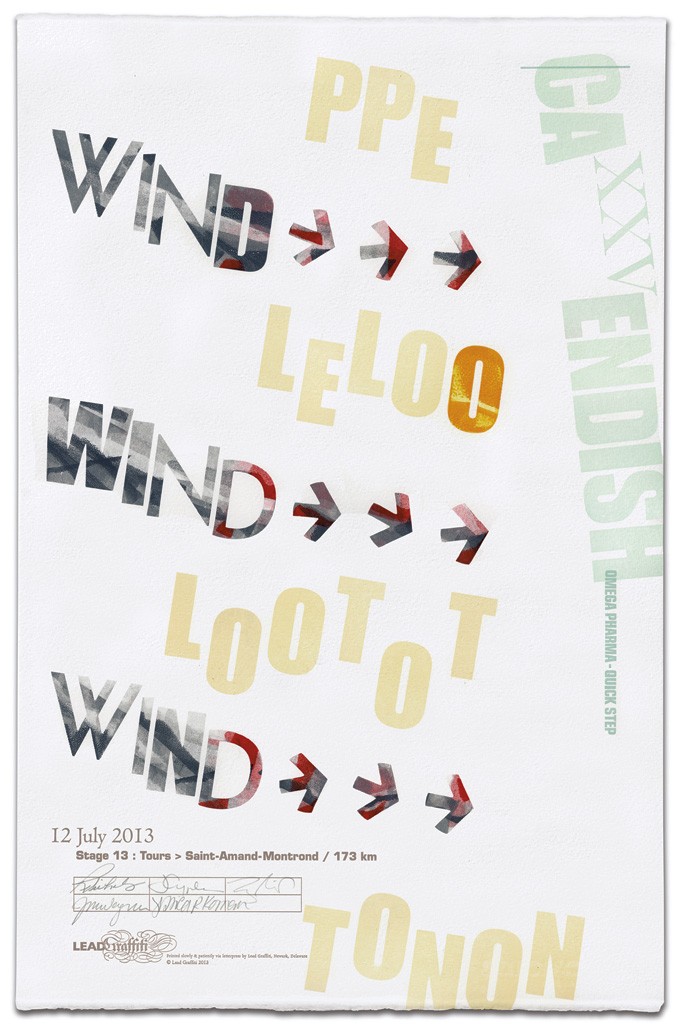 Wolff was instrumental in bringing Middlebury the 2013 Tour de Lead Graffiti, at American Flatbread through June. Pizza eaters and other members of the public can check out iconic moments of last summer's Tour de France in the form of 23 letterpress prints inspired by each stage and created by Delaware-based biking fans and artists. Featuring scenes of a dog disrupting the action, for example, and the stop at Mont Saint-Michel, it's a way to experience the fabled event without hopping the pond.

"If you're one of those people who'll wait by the roadside for 20 seconds of the peloton to go blurring by — if you've carved out a day for that — the one impression you take away is color," explains Wolff during a brief tour of the freshly hung posters at Flatbread. "And this is all shapes and color, which is what the Tour is. You can experience 20 seconds of the peloton blurring by just by coming to this exhibit."

During a pre-race fueling session at the next-door Noonie Deli, Jewett offers four strategies for getting up Lincoln Gap. Supposedly the steepest paved mile in the U.S., it's bracketed by a couple of miles of dirt for screaming descents. "No. 1 is youth and fitness — if you don't have that, the No. 2 strategy is gearing," says Jewett, referring to the complicated gears some riders add to their rigs to take the sting out of the ascent. "No. 3 is just to hurt a little bit. And the fourth strategy, when all else fails, is just to walk and enjoy the scenery."

The original print version of this article was headlined "Gap Gear"